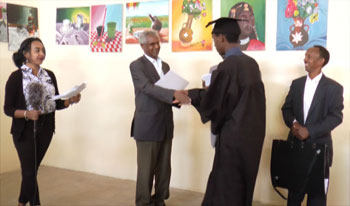 Two of my all-time favorite art idols: Pablo Picasso and Leonardo Da Vinci. Why am I using their name as the title? … That is because yesterday morning I felt a massive powerhouse of energy from 43 young art graduates. I asked some of them about their future plans and they answered by saying that they, one day, want to be like Picasso and Da Vinci.

Dreaming is easy at some age, and I am not discussing the fact that these young graduates might or might not be as grandiose as Picasso or Da Vinci, but, nevertheless I did not want to be discouraging, considering that I was their age once, and also I did not want to skip on the vivid determination I felt coming from these passionate young artists’ smile.

On the 7th of October 2016, 43 students graduated from Segen Eritrean Artists Group (SEAG). The awarding ceremony of these young artists took place in the SEAG grounds, right in front of a historic work of art, and also one of Asmara’s cherished monuments: the FIAT Tagliero.

Following their study in drawing, painting and sculpture for as long as two years along with their academic studies, the young and energetic debuting artists received their certificates from Ambassador Zemede Tekle, Commissioner of Sports and Culture.

The project titled “Art Training for the Youth” started on the 9th of September 2014. The action was a collaborative endeavor between the European Delegation to Eritrea and the implementing organization; Segen Eritrean Artists Group (SEAG).

Mr. Behrane Adonai, Director of Segen Eritrean Artists Group, said during the event that the main purpose of the group is to instill art appreciation in the youth of Eritrea. He said, “Art is not new in Eritrea. It existed for thousands of years. There is continuous development. We Eritreans want to contribute to this existing culture to our fellow citizens and thereby develop the skills of our young ones.”

“Art Training for the Youth” project was offered by 6 art teachers which involved courses such as Color Theory, Still Life, Anatomy and Perspective. These, mostly 10th and 11th graders, art students were coming to class three times a week for two hours each day. They were also taking sculpture and art history classes by separate teachers. On the whole, seminars, workshops and field studies were conducted to enhance the teaching-learning process according to the proposal of the action.

What I found superbly adorable, though, was the benches I saw while roaming in the classes; they call them ‘horse benches’. Apparently these student benches are customized to let a painter sit in front of his/ her canvas without the need of standing! I was told they were designed during the armed struggle, for EPLF freedom fighters-painters.

Right before handing out the certificates, Ambassador Zemede Tekle, Commissioner of Sports and Culture, delivered his speech whereby he stressed the need of nurturing young talents, he also expressed the commission’s readiness to join hands with organizations in order to assists such endeavors.

From the contracting authority, Ambassador Christian Manahl of the European Union to Eritrea expressed delight in being part of projects, as he congratulated the young graduates for their fruitful hard work.

Segen Eritrean Artists Group (SEAG) was officially established in January 1998, by artists with similar experience. What binds all the artists is their profession is deep love and appreciation of art. The group particularly aims a sure hand in the development of Eritrean art while promoting it to international level. Since 2001, the group, with the support of governmental and non-governmental organizations, has offered art training to over 1500 children and youth.

Segen Eritrean Artists Group (SEAG) has worked closely with the students in a bid to tune educational importance side by side with artistry imagination in the minds of these young painters.

“We selected 50 students from a pool of 9th graders from seven High Schools in Asmara.” Said Mr. Demoz Russom Head of Finance and Administration of the Group. He further added, “The National Union of Eritrean Youth and Students Maakel Branch assisted SEAG in the selection process”.

Side by side the reception, artistic creations in-canvasing the gentle brush strokes and innocent ideas of the graduates were on display. The exhibition will be open for the public until the 15th of this months.

Mr. Berhan Araya, the Project Manager on his part said, “The biggest challenge we faced in the project was the dropping out of students from the program which eventually was addressed by registering new ones and giving them intensive courses. Gradually, 43 students completed the training and today they are graduating.”

I also spoke with many of the graduates and their parents. They expressed appreciation for the well carried out project, and called for similar opportunities for the youth that have not yet discovered their talent. Parents in particular stressed on the fact that it is about time, parents stop thinking of art as an obstacle for students’ academic endeavors; “art does not shift the children attention from school, if anything else, it provides discipline and an access to one’s aptitude”, said one of the parents.

“Our teachers have experiences starting from the time of the armed struggle. These teachers have been teaching a lot of artists for many years now, they also have conducted exhibitions inside and outside of the country. Their experience is extremely valuable. Hence they prepared us to produce the paintings that are on exhibit today. We thank them!” said students: Mewael and Simon.

For better and greater, education is the core of everything, which is why the government and the people of Eritrea, have invested massively in boosting knowledge amongst young nationals. Knowledge being key ingredient for superior sequels, Segen Eritrean Artists Group (SEAG) promises to enhance its collaborative venture for more openings.

As for me, I wish for the student’s dreams to be realized, “Congratulations!”