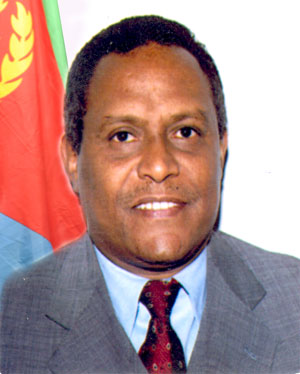 Veteran Fighter and Eritrea’s Permanent Representative to the UN, Ambassador Girma Asmerom passed away on 5 October at the age of 66.

Asmara, 07 October 2016 –  Veteran Fighter and Eritrea’s Permanent Representative to the UN, Ambassador Girma Asmerom passed away on 5 October at the age of 66.

Ambassador Girma joined the Eritrean People’s Liberation Front in 1978 after completing his Master’s degree in the USA. He served as a member of the Editorial Board of the Radio of the Broad Masses and Head of TBM Amharic Service.

After serving in the radio program for 9 years, he was transferred to the Foreign Relations Department of the People’s Front and served as Head of the Information Monitoring of African issues until the year 1990.

After independence, Ambassador Girma Asmerom was assigned at the Ministries of Foreign Affairs and Information and contributed in the national development program as well as in establishing Eritrean Television.

Moreover, Ambassador Girma served as Eritrea’s Ambassador to South Africa, Ethiopia, the US, in the EU and Luxemburg, the AU and from 2013 until his passing away as Ambassador and Permanent Representative of Eritrea to the UN.

Expressing deep sorrow in the passing away of Ambassador Girma Asmerom, the Ministry of Foreign Affairs expresses condolences to the family and friends.