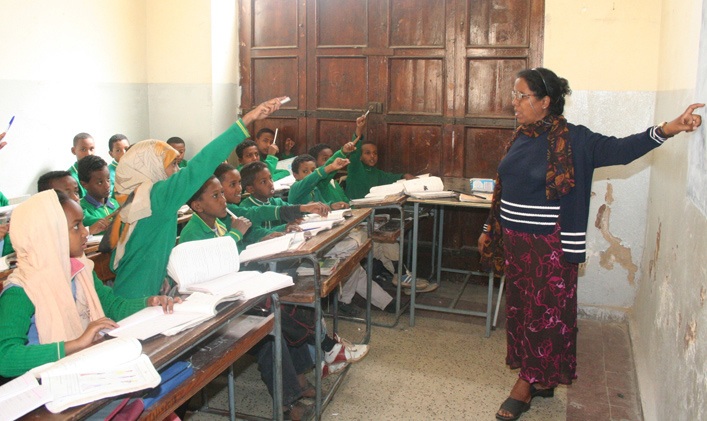 Earlier this week, on 5 October, many countries and organizations around the world observed World Teacher’s Day. Proclaimed by UNESCO in 1994, World Teacher’s Day is an opportunity to celebrate the teaching profession, highlight the vital, yet often unseen, contributions made by teachers, promote awareness and understanding about the various challenges and issues related to teaching, and encourage the appreciation and respect of teachers. The initiative for World Teacher’s Day dates back to 5 October 1966, when UNESCO and the ILO adopted a special recommendation on the Status of Teachers. Importantly, the recommendation established international standards and guidelines related to skills development, employment, and working conditions. Furthermore, the recommendation was an important milestone since it represented the first time teachers’ rights and responsibilities were globally defined and asserted.

According to UNESCO, education is a fundamental human right and is essential for the exercise of all other human rights. Education also promotes individual freedom and empowerment, and is a critical factor for socio-economic growth and sustainable development. In this context, the importance of teachers is readily apparent. Through providing vital instruction and transmitting knowledge to children, adolescents, and young adults (among others), teachers are a means of implementing various national education goals, helping to promote the realization of fundamental human rights, and achieving inclusive socio-economic growth and development. Moreover, teachers are important because they help develop societies based on morals, values, and ethics, and they are an essential source of encouragement and support in the lives of students. As socialization agents, teachers set positive examples or models for students, and teachers are also often the ones with whom students have the most contact and engagement. Quite frequently, not even parents spend as much time with or understand the capabilities of children or youth as well as teachers do.

Setting aside the oft-quoted, yet misguided, statement, “those who can, do…and those who can’t, teach,” teachers choose to become teachers for a variety reasons. Generally, these include: the desire to work with young people and impart knowledge; a love of children and youth; the challenges and responsibilities associated with the profession; a passionate interest and excitement about teaching and subject matter; potential security and financial rewards; to fulfill a dream; and the desire to do something valuable for society and make a difference (Phillips and Hatch 1999).

This latter point reminds me of a series of conversations I had years ago with a widely-respected and admired Eritrean teacher. He had vast experience teaching, volunteering, and community building and there was little question he was highly dedicated to refining his craft and thoroughly committed to positively affecting the people around him. I can still vividly recall asking him what motivated him, why he taught, and the reasons he did what he did. His responses continue to resonate quite deeply:

“It isn’t for money! Teaching is about contributing and about making a positive difference. It’s about taking what you have and infusing it into a place that has a great need now! It’s a way to uncover and explore issues, and then actively work towards tangible, sustainable solutions.”

In Eritrea, teachers have long played a positive role in society, making tremendous contributions and helping to initiate and lay the foundation for important positive changes. During the decades-long independence struggle, teachers were a vital part of a unique system of educational programs and institutions established within areas held by the Eritrean People’s Liberation Front (EPLF). Teachers, who were often wounded or disabled fighters, helped to extend education to other independence fighters and their children, orphans, refugees, and other groups traditionally excluded from opportunities to learn, including women, nomads, and the rural-based population. It is hard to overlook the dedication and commitment exhibited by teachers (as well as students and others), even under the greatest of challenges and obstacles. For example, while Ethiopian fighter jets circled menacingly high above, incessantly and indiscriminately bombing and terrorizing, “classrooms” (which were really just the shade under a tree) were simply shifted to caves and lessons continued.

A significant reflection of the great contribution made by teachers in Eritrea is the tremendous growth and improvement in education throughout the country. For decades, education was highly restricted and the country’s literacy rates (across all ages) were quite low, particularly for girls and women. During Italian colonization, the colonial policy toward Eritrea was to “keep the Eritrean’s belly filled while keeping his brain empty” (Trevaskis 1960), while in the mid-1970s, approximately 95 percent of Eritrean women were illiterate, a figure which would only slightly improve by independence. As well, at independence, overall enrolment rates (within primary levels) hovered at around only 30 percent. However, at independence, the Government made education a key priority. Education became compulsory for both girls and boys and it was also offered in the various languages used within the country, thus helping to ensure equitable access to all ethno-linguistic groups. Eritrea also proceeded to build hundreds of schools and learning centers (importantly in both rural and urban areas). For example, although at independence the Northern Red Sea and Gash Barka regions had only 28 and 60 schools, respectively, currently there are 277 and 408 schools in the respective regions.

Largely as a result of these steps, Eritrea’s primary enrolment rates are now approximately 90 percent, while both gender disparity and adult literacy have dramatically improved. Literacy rates for youth in Eritrea are the highest in the region, and notably also higher than the continental or global average. Encouragingly, youth literacy rates are also considerably higher than those for adults, suggesting that the country’s efforts to strengthen the supply and quality of basic education programmes have largely been successful.
Not only are these advancements a testament of the national prioritization of and considerable investment in education – government expenditure on education is between 8-10 percent of the national budget – they are also reflective of the fundamental importance of teachers. Simply, none of these dramatic and positive changes would have been possible without the integral role played by teachers. Schools can be built, but teachers are needed to staff them. Educational resources may be provided, but teachers are the ones who will provide students with the requisite skills and tools to effectively and appropriately utilize them. National curricula, educational policies, and literacy goals may be established, but teachers are the ones to implement them and put them into practice.

Ultimately, teachers in Eritrea have played a positive role in imparting knowledge, supporting the realization of fundamental human rights, helping ensure inclusive and equitable education, and promoting learning opportunities for all. Moving forward, Eritrea should continue to invest within education across all levels, and particularly through supporting teachers. Teachers will require continued and expanded support with resources, materials, and training or skills development opportunities. Such measures will not only underscore a commitment to teachers and serve as recognition of their great efforts, it will also help to strengthen and augment much of the educational progress already made.