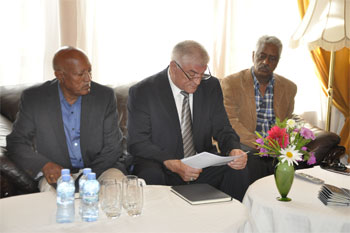 Partnership in education, particularly within higher education, is one of the key features towards sustainable development. In recent years, bilateral relation focused upon and funding in terms of education and training has risen in Eritrea. The Finland- Eritrea partnership is one of the many example of educational collaboration witnessed in the country. Many teachers from a number of countries, including Sudan, India, Japan, Kenya, and Turkey, and specializing in medicine, the social sciences, and other disciplines are scattered throughout Eritrea’s educational institutions.

Recently, the Russian Federation has also renewed and expanded its educational partnership with Eritrea. In fact, during the armed struggle, Eritreans were enrolled in Russian universities, with many joining the Front after the completion of their studies.

Talks were held in June 2014 between H.E. Mr. Osman Saleh and H.E. Mr. Sergey Lavrov, each the Minister of Foreign Affairs for their respective countries. Discussions explored the possibility of enhancing bilateral ties, including partnerships in the area of education. Following the meeting, both countries came to an agreement in 2015, and five Eritrean students had the opportunity to pursue higher education in Russian universities on government scholarships.

This year, the partnership is deepening, with the number of scholarships increasing. On 13 October, an official ceremony was held upon the premises of the Russian Embassy in Asmara to congratulate the 25 recipients of Russian scholarships. Minister of Education, H.E. Semere Russom, and the Executive Director of the National Commission for Higher Education, Professor Tadesse Mehari, as well as representatives of the Ministry of Foreign Affairs, former students of Russian universities, and prospective students took part in the ceremony. The Russian Ambassador, Azim Yarakhmedov, opened the ceremony by welcoming all participants and congratulated the students in winning these scholarships. He explained that it is not something new for Eritreans to study in Russia, as many were already enrolled at the time of the armed struggle. He also stressed how students’ fulfillment of their studies would be a great contribution to the needs of Eritrea, and he concluded by offering words of encouragement.

The event continued with remarks by Eritrea’s Minister of Education, Semere Russom, who expressed his gratitude towards the Russian Federation for the educational partnership. He highlighted the re-emergence of the relations between the two countries and its reflection in the deepening educational ties. “This is a huge investment in each one of you, but this also illustrates a collective responsibility you carry for your country,” the Minister expressed to the students. The speeches continued with Professor Tadesse Mehari, who offered advice to the students, as well as explaining the important investment made by the Government of Eritrea in terms of financial support for student studying in Russia. “The country and the people are investing in you,” he added.

Further, former student during the Soviet Union, between 1969 to 1975, Ambassador Negassi Sengal, Director General of Information and Public Relations at the Ministry of Foreign

Affairs, expressed his encouragement by enhancing the positive experience he had: “Russia is a country of sciences, culture and technology”, he said. Professor Zemenfes Tsige, Director of the Bureau of the International Linkage at the National Commission for Higher Education, also shared his deep appreciation and gratitude towards the Russian Federation and outlined his hope that the number of scholarships offered to Eritrean students would increase in the near future. He also extended encouragement toward students, pointing out that he expected they would “graduate with flying colors.” Professor Zemenfes also added that the educational partnership between the two countries would aim to create a culture of academic diversity for future generations.

The ceremony came to an end with the handovers of visas to all prospective students, who will study in a number of disciplines, including geology, neurosurgery, physics and astronomy, agro-engineering, and medicine, at both the MA and PhD levels. This educational partnership with the Russian Federation is surely a step ahead in the relations between the two countries, as well as a vital investment made by the Government of Eritrea towards educational progress and development.