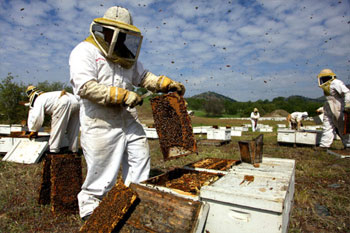 Mai Werki, a private firm for distributing honey and dairy products, was established in 2008. Underpinned by and synchronized with priorities of the Ministry of Agriculture, in 2009, the home business started excelling its endeavors to a wide span.

In that year, various farmers got an opportunity to provide their products in organized manner and Mai-Werki was the main forefront in working appropriately for equating honey demand and supply in the country.

As part of the government policy for emboldening effective and public-centered businesses, the Ministry of Agriculture continued creating a suitable ground for Mai-Werki to display its agricultural profiles in the National Festival. Resulting in unreserved public comment for excelling its products, Mai Werki took an initiative to reconsider its labor-intensive and manual-based working models. Under the auspice of the Ministry of Agriculture, technicians and experts on apiary products continued exerting their encouraging support when needed.

Derived from this, since 2015, Mai Werki installed a new machine; partial problems were resolved. The Ministry of Agriculture also remained conscious to collaborate with managers of the business for addressing such issues responsively. Even though the machine role in analyzing water contents and other ingredients of honeys has been significant, the efforts for standardizing the products in their qualified range were the main task for the owners of Mai-Werki and the Ministry of Agriculture.

Including the 70 farmers who are working tremendously for supplying qualified honey products, Mai-Werki is not only engaging in maximizing its interests; by the same coin, it offer various professional and other apiary-activity centered workshops to the regular honey suppliers’ farmers and other customers. The concerned body in the Ministry of Agriculture continued reassessing activities of Mai-Werki for ensuring that the business home is running in the way that would meet expectations of the public.

Here to accomplish its social responsibility, Mai Werki started distributing its products to customers, organized workers from different private and governmental institutions. In the central region alone, there are 75 institutions which are profiting from such agricultural products. That in itself has added motivating stamina to the statue of Mai-Werki responsibility and undeniably, it is bolding the results of professional engagements of the Ministry of Agriculture in inspiring industrious farmers and agricultural cooperatives.

As basic classical economists’ stance, equating quality of products and their selling prices are determinant in shaping landscapes of clients’ satisfaction. To avoid unnecessary burdens, Mai-Werki and the aforementioned different institutions agreed to help customers to pay on monthly basis and at equal installment plan. In fact, this has motivated many employees from different companies to benefit from such opportunity. Even employees who are not organized under any worker umbrellas have the same rights also. And the selling price for one kilo of honey was 400 Nakfa; thanks for the policies that were reinforced in the fall of last year for the redemption of the Nakfa currency, now, the selling price is 300 Nakfa.

Intended for not being confined only within the country, Mai-Werki also got an opportunity from the concerned governmental bodies to export honey products; resultantly, limited portions of productions  as a sample and to armor pre-assessment researches of the cooperative business 64 quintals of honey were exported to Yemen in 2008, and to delve competitively in the arena, the exportation activity continued by sending 80 quintals to Dubai in 2009. Archives of the farmers-centered but privately owned cooperative witnesses remarkable solid foundations for Eritrea to consolidate its strength thereby to augment honey products and undoubtedly, the Ministry of Agriculture is certain of such rewards.

As stated earlier, to excel standards of the products, Mai-Werki–supported by the government policies that emboldens public-centered individuals’ activities an enthusiastic young, Mr. Ibrahim Salih to various states, including Yemen, Saudi Arabia, Sudan, Taiwan and India. The aim was in fact for fostering Mai-Werki’s apiary experiences by getting experimental knowledge from different countries apiary-centered activities. After the work tour, Mai-Werki became glued to the idea of establishing honey packaging factory in Eritrea.

Working models of Matuka Honey Packaging Machines of Taiwan and Sterling Engineers and Boiling from India especially attracted the eyes of Mai-Werki’s managing body. And pre-assessment researches that were held in the stated countries gave an affirmative authentication that there are not any impediment to establish honey packaging factory in Eritrea. To profit from professional involvement of the concerned body, the Managing Director of Mai-Werki presented a research proposal for creating work links with the two companies.

Ministry of Agriculture showed unreserved commitments and set up an advisory committee that have to deal with both pros and cons of such endeavors. After in-depth researches and multi-penetrating outlooks on cleared work guidelines and functional technical applications held by the concerned experts from the Ministry of Agriculture, Mai- Werki agreed on the similar but scientifically and professionally architected findings.

At last, to tune the activities of the largest macro-national development policy, Mai-Werki presented a bid dossier to Matuka Honey Packaging Machines of Taiwan and India’s Sterling Engineers and Boiling. After critical assessment, the firm from India is selected for multifold advantageous reasons. An agreement for the company  Sterling Engineers and Boiling– to establish honey-packaging factory in Eritrea was signed in December 2015. The company also agreed to carry the activity responsibly and has started arming itself with vital means for installing a purposeful job.

In conclusion, Mai-Werki expressed its candid gratitude to the Ministry of Agriculture. “The Ministry is not only supporting us in providing various accessories for carrying-out apiary products at high quality, additionally, the Ministry has allowed us to use its up to date laboratory; and undeniably, we are using this lab which is established in Villagio- Genio in affirming the standards of our products.”

“Highly educated by such efforts, therefore, Mai werki is working relentlessly to pay off the government by answering the right questions of the public regarding this center. Of course, after establishing the honey packaging factory, we are going to chase after every beehive in the country and we will confirm it is channeled for every home at fair price.”
Compiled by: Yosief Abraham Z.