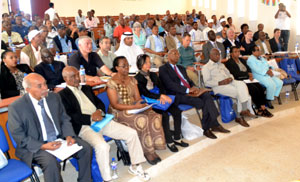 World Food Day was commemorated on 16 October at a national level in Hamelmalo College of Agriculture under the theme “Climate is Changing Food and Agriculture must too”.

Asmara, 16 October 2016- World Food Day was commemorated on 16 October at a national level in Hamelmalo College of Agriculture under the theme “Climate is Changing Food and Agriculture must too”.

In the event in which Mr. Arefaine Berhe, Minister of Agriculture, Mr. Tesfai Ghebreslasie, Minister of Land, Water and Environment, Ms. Amina Nurhussien, Minister of Health, diplomatic corps and representatives of international institutions took part, briefings as regards the endeavors that have been exerted to ensure food security and achievements so far registered were presented.

Minister Arefaine said that climate change and its impact is global and Eritrea as a member of the International Community naturally thinks globally but acts locally and thus such an initiative is required by every member country in order to sustain the health and productivity of our planet.

Highlighting that this year’s theme could not be more appropriate for Eritrea, Minister Arefaine pointed out that Eritrea is situated in the Sahelian part of Africa and thus the rains are usually insufficient and erratic.  Hence, for Eritrea, climate-smart agriculture is not just a piece of UN agreement but more of survival, he further said. Mr. Arefaine also stressed that that precisely the reason why Eritrea takes soil and water conservation, in general and water harvesting in particularly very seriously, Minister Arefaine elaborated

Indicating that the availability of sufficient food supply needs to go parallel with the ever growing global population, Ms. Bui Thi Lan, FAO Representative in Eritrea, expressed concern that climate change and the subsequent global warming are posing threats mostly to the global population that depends on fishing and agriculture and thus poverty and famine would be the dire consequence of such a phenomenon.

Mr. Haile Ghebru, WFP Officer in Charge, on his part explained that the prevalent challenge of food security could be tackled through collective and integrated efforts.

Finally, the participants of the commemorative event observed efforts that have been exerted to ensure food security, soil and water conservation as well as greening activities  being carried out by students from Hamelmalo College of Agriculture and Hagaz Technical and Agricultural School.

During the event, exemplary farmers were awarded.

Board Induction to Eritrea’s Leading Corporations