From a Talented Soccer Player to an Eminent Artist 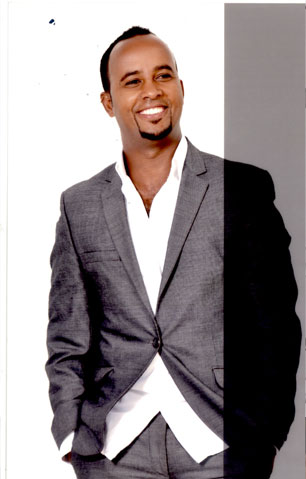 “Music is the art which is the most nigh to tears and memory”, is one of the saying among the many that have been said to express music. Beyond the enjoyment of good music, people had and have been inspired to create music and become inspiration to others. Henok Teklay, mostly known by his nick name, Nago, is a young Eritrean artist who was inspired by legendary Eritrean musicians only to become one of the big names in the music business in Eritrea. Our guest today is Nago.

That is a question even I can’t answer until this day. I don’t recall how I shifted to music from being one football fanatic, not only as a fan but also as a player. But mostly it has to do with my big brother Yosef Teklay (Arba’a). He has influenced me in many ways in my life. I began to be interested in music when I was in elementary school. My other big brother used to help me with my studies, he would give me exercise questions and would sit next to me listening to Abrham Afwerki and Yemane Barya songs. That is when I started to enjoy music. However, it is when Yosef started playing music that has become the base for me to be a musician.

Yes, my father was a sportsman. He played soccer with big teams of his time. Besides, Yosef also used to be a soccer player and I used to carry his bag to his training, which made me more attached with soccer. Besides, the neighborhood I grew up in was known for soccer, everyone loved to play. So to become a professional soccer player was all I ever thought of. Over the years, I played for a junior soccer team for a year, I then joined a 2nd division team and later played for the Gezabanda Fc at the Eritrean Super Division for six years. Although I am not in any team right now due to shortage of time, I still play to keep fit.

Not at first. He wanted me to excel at school as everyone in my family was. Arba’a used to play at different occasions, especially weddings, and I used to go there in disguise to watch him play. I guess those things gave me a fling towards music. Fortunately, when he realized he couldn’t stop me, he started taking me to work with him and guide me. He supported me unconditionally afterwards and that was a breakthrough for me.

Well, I started to play Kirar, a string instrument, and sing to my friends in my neighborhood. There were older guys who played the instrument around me, so when they put it down, I used to pick it up and play. I particularly remember our neighbor who used to sell prickly pears during the summer time. I helped him sell his fruit to let me play his kirar. That is how much I wanted to play. The first time I got a boost was when my song “Te’adilki”, written by Tesfalem Chare for the 2007 Independence Celebration was played in the mass media. For the first time, I performed at Bahti Meskerem Square in front of thousands of audience.

There is a proverb which I love when it comes to music. It goes “even if you can’t make music, you must listen to it”. Music is part of my life and I wouldn’t imagine life without it. It is life for me. You turn to music when you are stressed, it is a means to relaxation, sometimes can add a meaning to life for some people. I can’t really say anything to add to what music is if not to lower the value of it. All has been said about it.

Live. I somehow get some kind of power and excitement while singing on stage.

First I all by myself. Right after completing my national service in 2005, I started working with the sport commission as a soccer player. After that I was with a couple of musical groups before I joined the Aser musical group in 2009 and I am still with the group ever since. I have always wanted to join a musical group to work together and learn from each other and Aser was my dream group. By the way I would like to pass my appreciation to Negasi Gebredngle, Sham Qalab, and every member of the group. We work as a family and help each other at everything.

I work with numerous artists. Kahsay Wedi Quada is the one who does most of my works besides all the artists.

I have 12 songs which I have released and performed at different occasions in addition to an album which contains 11 songs.

Yes I do. It’s the single I released titled, “Himak Kab Tsbuq”. It was my first hit song. I love the content of the song as well as the choice of the clip. I was satisfied by it and I am glad that I decided to do the song. It is something special for me. It was a time when I was a happy beyond imagination.

It was all Tantan’s choice. He directed the video clip and made all the choices. We had to find all the antique places, car, cashier, the costume. I guess that is one of the main reasons that the clip was loved by many. It has so many reasons for it to have a place in my heart.

I traveled to Sudan, Uganda, Saudi Arabia, Qatar, Australia, Italy, Germany, Sweden, Holland and Denmark. I can never express the hospitality we received from Eritrean nationals and foreign fans wherever we went. You just can see how they miss their homeland. They treat you as just a member of their family. It is always no different every time we go to perform at different occasions. You can just see how Eritreans are tight as people everywhere you go. They don’t want you to be a guest, they try to make you feel as comfortable as possible. It is a unique experience every time I travel.

Sawa. It brings me great joy to play for the students and see them get happy dancing around and enjoying the moment.

Abraham Afwerki is a legend to me and has a great place in my heart. I used to listen to his music since I was a kid and still listens to them. Another great musician for me is Arba’a. He is the reason I’m in music world. He has been a great influence for me and I have been always inspired by him.

I am happily married to my lovely wife Nardos Eyob. We grew up together as friends since we were young, and as our friendship turned into love, we went out for around 11 years and got married. Now in about six years of marriage we are blessed with two boys Kabi, Dan and a baby girl named Lsan.

I am grateful for every opportunity and very one who has been there for me to be where I am today.