‘Climate is Changing; Food and Agriculture Must too’ 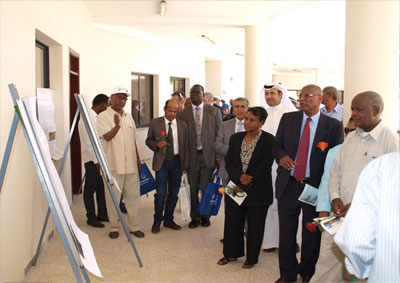 Located on the Horn of Africa, Eritrea has a long coastline on the Red Sea. The country has varied topography, rainfall, and climate, with altitude ranging from 60 to more than 3,000 meters above sea level. Eritrea has a mostly arid climate with about 70% of its land area classified as a hot and arid and receiving average annual rainfall in a of less than 350mm. Ambient average temperatures vary considerably, with the eastern lowlands having an annual of 31°C with maximum of 48°C, in the highlands annual average amount for 21°C with a maximum of 25°C, in the western lowlands it is 29°C with 36°C maximum. Taking into consideration climate, soil types and other parameters, Eritrea is divided into six agro-ecological zones. Agriculture is still an important sector for Eritrea, employing about half of the population and producing about 20 percent of GDP.

The World Food Day 2016 was celebrated in Hamelmalo Agricultural College (HAC), 12 kilometers North of Keren city, on Sunday October 16, 2016 under the theme of “Climate is changing. Food and Agriculture must too.”

Mr. Semere Amlesom, Dean of Hamelmalo Agricultural College, opened the ceremony by welcoming guests and briefly elaborating on the composition of the institution, faculty, students and education provided at the institute.

During the ceremony, Minister of Agriculture, Mr. Arefaine Berhe also addressed the crowd, “As we can all appreciate, Climate Change and its impact is Global and Eritrea, as a member of the International Community naturally thinks globally but acts locally. And this is what is required of every member country in order to sustain the health and productivity of the only planet we share.” He further added, “Eritrea being located on the Sahel-Saharan region has been committed to work on climate smart agriculture. And this is precisely the reason why Eritrea takes soil and water conservation, in general, and water harvesting, in particular, very seriously.”

What has been done to adapt to climate change in Eritrea so far?

Agriculture and Food Systems: the Eritrean Context” include:

•Furthermore, the Government of Eritrea in collaboration with the UNDP is developing a program focused on promoting increased food security in Eritrea through ecologically sustainable and climate-resilient improvements in agricultural production. The objective of the program is to increase community resilience and adaptive capacity to climate change through an integrated water management and agricultural development approach in the sub-regions of Hamelmalo and Habero and the Anseba Region. Specifically, the project aims at increasing the availability of water through floodwater harvesting and groundwater recharge; promote a range of climate-resilient technologies for enhanced agricultural and livestock production; improve the dissemination of climate risk information among community, civil society and government stakeholders through a community-based early warning system; and capture and disseminate lessons learned through program activities, and to influence policy through advocacy activities.

Ms. Bui Thi Lan, FAO Representative in Eritrea delivered Mr. Jose Graziano Da Silva, FAO Director General’s message. In his speech for the day, the Director General said that climate change is undermining global food security, and as usual, the poorest and most hungry people suffer the most as 80 percent of them live in rural areas. He also said that agricultural sectors are the solid resolve to this adverse effects of climate change. At last the director general concluded his speech by reiterating the World Food Day message, “Climate is changing. Food and Agriculture must change too.”

FAO is working hard to strengthen the resilience of smallholder farmers, by guaranteeing food security for the planet’s increasingly hungry global population and also reduce emissions. One such method is the proper management of livestock as livestock contributes to nearly two thirds of agricultural greenhouse gas (GHG) emissions, and 78% of agricultural methane emissions. FAO is working with countries to improve livestock management and mitigate the effects of climate change.

Global estimates indicate agricultural production must rise by about 60% by 2050 in order to feed a larger population. Climate change is putting this objective at risk but FAO and its member countries are working on various solutions. Dr. Josephine Namboze, WHO Representative in Eritrea, delivered Mr. Ban Ki-Moon, UN Secretary General’s message. In his message, Mr. Ban Ki Moon, UN Secretary General said, “Climate change is threatening to reverse hard-won gains and placing in jeopardy our ability to achieve the Sustainable Development Goals.” He further added, agriculture and food systems must consider climate change effects so as to secure food production sustainability.

Since independence, the Government of Eritrea has made considerable efforts to strengthen research in agriculture and agro-meteorology. Several meteorological and hydrological stations at selected sites were established. Nonetheless, the attributes such as location, distribution and type of instruments in each of these stations in many cases may not satisfy the requirement for a national observation network to produce reliable climate prediction information.

Breeding drought and disease resistant crops meet the urgent and immediate needs of vulnerable communities in Eritrea is also another essential area that should be addressed by our research institutes. Strong institutional set up, development of human resource capacity in technical, scientific, and managerial aspects and the introduction of modern technology are also decisive factors in the fight against the adverse effects of climate change on food production and agriculture.

For example in Eritrea, Desert Locust are a perennial threat, with almost annual outbreaks, thus there is a need for clear early warning mechanisms. While controlling the movement of the pest may not be possible, Eritrea is harnessing the power of advanced technologies in Desert Locust survey called eLocust3 to detect the movement of the locusts and therefore trigger early action. A field survey at the end of January confirmed that the Desert Locust situation was calm along the 1200 km Red Sea coastline in Eritrea during January 2016. This is one of many incidents when Eritrea utilizes power of modern technology to develop agricultural output.

The World Food Day 2016 was attended by Government Ministers; members of the Armed Forces, officials of Anseba Zonal administration, members of the People’s Front for Democracy and Justice, Religious Leaders, Ambassadors and Chargé d’Affaires, country representatives and OiC’s of UN Agencies, Funds and Programs in Eritrea, the press, faculty members and students of Hamelmalo Agricultural College.

During the event, the Minister of Agriculture handed out certificates to exemplary farmers in apiculture, poultry, dairy and vegetable production.

Finally, participants observed the community based soil and water conservation efforts, the eco-dairy training center, an ornamental nursery and several agro-products from the college and the private sector. The occasion was hosted by the Ministry of Agriculture with the support of the Food and Agriculture Organization in Eritrea.