The Art of Cycling: A brief History! 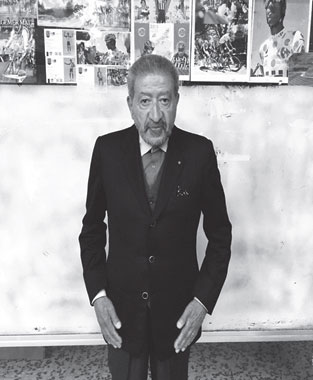 Asmara 7:30 pm. People are returning home; on foot, on a bicycle and by car. You are also homeward bound. Some streets are quite dark. But you have gotten accustomed to the situation. One more crossing of the street and you will be right home with your family. Whoosh! What was that? An unidentified flying object? A ghost? The spirit of God carrying a message of doom? NO. That was a bicycle. You didn’t have time to get even a shadowy glimpse of it. Phew! It was a close one.

Arebia Sheitan (devils carriage) was the name initially given to these two wheeled contraptions by our people about a hundred years ago. The impact of this superstition can still be seen across our border where the priests are loath to ride on bicycles.

Gradually, people began to use the bicycle. It was sleek, fast and cheaper than the car. It moved in narrow streets, was easily steered and maneuvered and needed neither fuel to make it move nor battery to start it.

In the 1950’s many Eritreans owned bicycles. From those that went clickety-click, without light and mudguards to those who shone in the sun and were fitted with all kinds of industrial and traditional accessories, such as front light, reflector, pump, bell, carrying rack for one’s belongings, a rear-view mirror, an ear of corn or a flower for decorations, a mud flap with the countries flag,etc.

“Have you seen Girmay zooming past with his shinning bicycle, Astier?”

“Seen him? I am dreaming of one day marrying him.”

Which reminds me of a hilarious story my Dad once told me of his own father.

My Granddad used to bike to work every morning and afternoon, but on one unfortunate morning as he was getting ready to go to work, to his own dismay, he found his bicycle’s front tire flat.

“Why don’t you take mine,” suggests my dad trying to be helpful.

My granddad who always wore immaculate suits to work would hilariously go on to say;

“Son, your bike looks like a Barista!” indicating to the many colorful decorations his son’s bike had, “I rather walk, thank you very much.”

But Bahsai Haile is not very fortunate. He is past seventy and had problems steering his bicycle properly, especially downhill.

“Well, Bashai Haile, I think now you have mastered the art of cycling?”

“Praised be the Lord. Now I can at least wave my fly whisk with one hand as I steer with the other.”

One day, one of his sons, Gebre, took the bicycle for a joyride and broke the brake cable. He did not inform his father about the incident.

When the next morning, Bashai Haile rode his bicycle to go to work, he was as usual brandishing his flywhisk and was feeling happy and elated. The road that Bashai Haile followed was a nit bumpy and with steep slopes and with prickly pear bushes here and there.

Going down the steep slope along the bumpy road, Bashai Haile had to turn left before taking the straight road to his work. But he had to brake before turning left, for straight before him stood the prickly pears ready to welcome him with outstretched spiky arms. He pulled on the brake lever with all his might. Nothing. He tried again. No effect. As he flew headlong right into the prickly pear, he shouted: I know it is Gebre, that naughty child of mine! Wait till I come back home. I will skin him alive.

Eritreans are very fond of bicycles. The young and the old, boys and girls all love to ride to work or home. In some ways, the bicycle is also a wagon of the poor. If it were not for the bicycle, the minuale (Cheap labor force from the country side) wouldn’t have arrived on time to please Signore Rossi, who had the power to hire and fire them as he pleased.
“How come everybody here knows how to steer a bicycle?” asked a Derg soldier to a doctor one day, after a little accident.

“What do you mean?” asks the doctor.

“You see, I tried it many times and look what happened to me.” He showed the doctor a grazed knee, a wrist with contusion and a wounded chin that needed stitching.

“Why don’t you simply walk like the rest of your friends?” He suggested.

What was he trying to prove? After all, the trench warfare of the First World War when soldiers went to battlefield on bicycle, was over.

“Well, frankly speaking, I have Tiblest in mind. I have a crush on her and I simply wanted to impress her by maneuvering a bicycle in front of her,” he confessed. Good old days!!!

He grew up in Addis Ababa where bicycles were rarities and where people hardly used bicycles. In the past, during the Ethiopia occupation of Eritrea, one of the ways adopted to find out whether one was an Eritrean (rather Asmarino) or an Ethiopian was to see how one steered a bicycle. Only Eritrean rode bicycles gracefully, would tell me my Grandad.

When the freedom fighters began to use bicycles to liquidate the enemies of the people, the Derg soldiers wish came true. Hating bicycles for ‘unhorsing’ them all the time, they now decided to stop them from circulating once and for all. They are the wembede’s (The Bandit’s) carriage, they said. Well, that’s more or less exactly what they called it in their country when their fathers first saw it: Yeshitan Seregella.

No wonder Eritreans have been and are still winning in cycling competition all over the world. And cycling has become, Eritrea’s national sport.

But, the way the people (mostly youngsters) are riding bicycles at present leaves much to be desired. The problem is that bicycle culture in this country, as in most third world countries, has become a subject to be studied closely. People tend to consider the bike as a vehicle ‘of the masses’ and therefore ‘exploited’ by the rich car owners. So all traffic rules are ‘bourgeois’ rules and cyclists can steer their vehicles any way they like with impunity.

Two weeks ago I happened to be in Mai-Temenai visiting a friend. On my way back home, I had to cross a street to board a bus on the opposite side of the street. I had hardly walked about a meter into the street than a boy of 12 riding a bike came hurtling down the street unable to brake on time. You know, when cyclist ride in a crowd they prefer to steer out of obstacles than using the brakes. So this boy simply bumped into me and was hurled forward leaving me sprawling near the pavement with my wrist almost broke.

A crowed formed on the spot. A crowed with distorted view about good and bad guys. As I tried to take stoke of what happened and moved my hand for any sign of sprain or contusion, I couldn’t help noticing that the crowd were sympathetic to the poor boy who knocked me over.

“Is that the guy who knocked you over?” they asked the frightened boy.

They thought instinctively that I was the owner of the bike and that the poor boy was a victim of my careless steering.

When the little boy told them the truth, they all moved towards me.

The bus driver waited for me to get in, but I waved him to continue.

Among the crowd were doctors, good Samaritans, philosophers, showbiz fans, the curious, the kind, the prejudiced, etc.

“No, you simply put ice cubes on the sprained part.”

“Children of this generation. They never stay put in one place.”

And in the end, one do-gooder approached and pulled my finger and wrists for checking.

“It is okay, no broken bones,” he affirmed.

I went into the next bar and asked for ice cubes. A man who was drinking beer with friends approached me and after examining the bruise, took out a piece of paper from his pocket and scribbled medical prescription for me.

“Just rub it on the spot where it hurts,” he ordered and left.

The very next day though as I was telling my friend of the little accident, which led to us talking about bicycle’s in general, he told me Eritrean cycling lost one of its very own this week, a legend in the name Giovanni Mazzola. Giovanni Mazzola who was born in 1938 in Asmara from his Father Mazzola Salvatore and mother Demekesh Gebremeskel was one of Eritrea’s early cyclists.

After a bit of digging around to learn about the man, I found out that he was one of Eritrea’s first ever cyclist’s, here is a bit about the man;

“Olympian cyclist Giovani Mazzola who in 1957 bought a bicycle for 150 birr that was assembled by signor Dicagno, started to race. In that year he championed from his group .In 1958 he was promoted to the middle group and won the championship.

In 1960 Giovanni Mazzola participated in world Olympics held in Rome. In 1961 he won the annual championship held in Eritrea. In 1962 cycling competition held in Asmara-Keren-Asmara line Giovani became the winner. In the annual championship of Eritrea 1964 he stood 6th and this was his last competition and officially resigned from the saddle. In the late 1960’s and early 1970’s he became the chairman of the junior club. In 1980’s he served as member of the cycling Federation in Eritrea. After independence, in 1994 Giovanni was elected as president of the cycling Federation of the central region. Giovanni played a great role for the development of cycling in Eritrea. He is a tireless citizen who dedicate his time for the development of Eritrea’s cycling. He introduced for the first time mountain bike race and the disabled wheelchair competition in Eritrea. Giovani produced many cyclists and still continues to produce by offering multi-sport materials.” Tarik kididm bishikleta ab Ertra 1936-2011.This week also, Eritrea’s national Cycling teams have been in Doha, Qatar for the last 8 days taking part in the 89th world cycling Championships, and it is no surprise to hear the team did well throughout the competition, with Natnael Berhane finishing 13th in the elite men road race championship. By now we all have been accustomed to Eritrean cyclists succeeding in every cycling competition endeavor they partake in. A sight Giovanni Mazzola will continue to enjoy from the heavenly above.

“It’s the mind that runs…Not the legs”