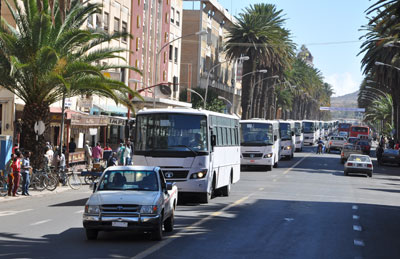 When the Harat Company policy strategists developed their future outline regarding the aims of the Harat Transport Services, they sought to achieve national priories. Specifically, ensuring the safety of the public and reducing their exposure to transport manipulators. For over a decade, middle-sized buses of the company have been found throughout major cities and even small towns.

Despite the rumors of that time suggesting that Harat may experience trouble in competing with the experienced bus companies like the Asmara Bus Company, Gemel Transport Corporation, SATAIE, Red Sea Cooperatives Transport, and Awet Private Bus Owners Association, Harat Company has continued to succeed. It has worked tremendously hard at improving services and accessibility for all people and regions of the country.

Under the aegis of the concerned body of the Government of Eritrea, Harat continued adding new model buses to the country. In 2011 alone, for instance, the company brought judicious changes in transportation fares. And as the society acclimatized to the policy guidelines of the company, constructive engagements between trilateral bodies started happening for tangible changes: the public, the government and the private bus owners.

According to Brigader General Birhane Tsehaye, Managing Director of the Company, while Harat buses cover 65% of the entire regions of Eritrea, the demand for transport is growing greatly. And in some areas, as in the Southern Region where Harat Company buses account for 23% of the transport coverage, private bus owners associations like Awet are the forefront transport services provider in the region.

However, as records of Eritrea’s transport services testify, private buses often don’t reach the most remote areas of the country. Moreover, with the staggering depreciation

records of the buses, the safety of the public and their luggage may even suffer. To minimize such hurdles, therefore, the Government decided to import modern buses which were safer, more comfortable, and improved overall service.

And through time, Harat augmented its capacity and continued to open various branches throughout the country, including to Menokuseito—a small village near the border with Ethiopia. The company has 446 buses, 100 branch offices, and 1300 employees working hard to meet the public’s demand for safe, comfortable, affordable transport services.
Meanwhile, even though Harat has been providing services in various corners of the country, its prevalence in the transport domain is not a substitute for the private bus owners. As clearly stated in the 1992 Proclamation, Harat exists to support affordable transport services for all. For example, two years ago, the fare from Asmara to Abune Merkerewos Monastery was 400 Nakfa; currently, it is 175 Nakfa, largely due to the impact of Harat.

As transport is one of the critical sectors of any country, the influence of Harat has been positive. At the same time, efforts toward maintaining transport services have the potential to absorb major financial and material resources of a nation. Accordingly, the private sector has an important role to play, and private bus owners are encouraged to work in the country.

According to the Operations Department of the Ministry of Land Transport, Harat is part of the government’s answer for ensuring standardized transport services. However, although the company has expanded its services to more regions, adding hundreds of buses, transport demand remains high in the country, especially during holidays.

“Even though there are many responsible private bus owners, there are also a few others who chase after every opportunity to speculate on unfair prices and to take advantage of travelers. However, through the introduction of Harat, such practices have begun to considerably decrease,” asserts the Managing Director of the Harat Company.