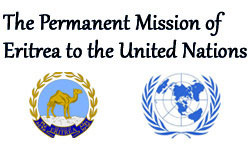 The event was chaired by Mr. Amanuel Giorgio, Charge d’Affaires, Permanent Mission of Eritrea to the United Nations and Ms. Christine Umutoni, UN Resident Humanitarian Coordinator in Eritrea. Mr. Yemane Ghebreab, Advisor to the President of Eritrea, Ms. Senait Lijam, representing the National Union of Eritrean Women and member of the UPR implementation Coordinating body and Dr. Mansoor Mirza, UN Policy Specialist in Eritrea as well as key stakeholders were present at the side event.

In his opening statement, Mr. Amanuel Girogio stated that while Eritrea has registered its concerns and disappointments on numerous occasions on states that choose to dwell on double standards, several states have begun to engage Eritrea on concrete sets of actions that embody cooperative approach to the respect of human rights. He announced that Eritrea had signed the UN Eritrea Partnership Program document on the implementation of the Universal Period Review and Human Rights; and he further noted that the document has been mainstreamed into the Strategic Partnership Cooperation Framework between Eritrea and the UN.

Mrs. Lijam said that while Eritrea continues to take its own initiatives to protect and promote human rights, it is engaging and co-operating with various international organizations and countries, including: UN Agencies in Eritrea, Office of the High Commissioner for Human Rights, United Nations Office on Drug and Crime, African Commission for Human and Peoples Rights, European Union and European countries, South-South cooperation. She concluded by stating that the cooperation agreement with the UN Country Team on the implementation of UPR also offers a platform for cooperation and partnerships with any country or organization.

Dr. Mansoor Mirza, UN Eritrea Policy Specialist in his presentation, “UN Programme to Support the Government of the State of Eritrea (GoSE) on Implementation of the Universal Periodic Review and Human Rights Mainstreaming”, provided an overview of its programs in Eritrea. He stated that the cooperation agreement aims at accelerating progress in the implementation of UPR recommendations and ensuring timely reporting requirements.

He stated that Human Rights Working Group and a UPR Coordinating Body consisting of relevant ministries, government bodies and national civic associations have been established. The GoSE has also produced 2 key documents on UPR and human rights mainstreaming – Plan of Action 2016-2017 and Framework for Action 2015-2018. In conclusion, he stated that the project represents a significant opportunity to support vital human rights work in Eritrea and that GoSE remain committed to the UPR process and strengthening human rights in Eritrea

Ms. Chrisitne Umutoni said that the partnership between Eritrea and the UN continues to grow. She stated the driving energy for the UN in Eritrea is the commitment of the government to engage and the “value for money” for its projects. She explained although the UN receives not so large amount of resources for its programs, Eritrea has been able to achieve health related Millennium Development Goals and was on track to meet the rest. She added “if you spend money for vaccine you get 100 percent coverage.”

Mr. Yemane Ghebreab, in his concluding remarks said that after a very challenging two decades, the people and government of Eritrea are, “more hopeful, more optimistic, but never complacent”, and “not satisfied with where we are, and the very little that we have achieved, we aspire for more”. Mr. Yemane Ghebreab said Eritrea’s peace, stability and the population’s ethnic and religious harmony cannot be taken for granted, and that Eritrea wants to rely on its own resources first, but needs to be supported in its development efforts. Eritrea calls for level playing field and continued solidarity in its endeavor to meet the aspirations of its people.