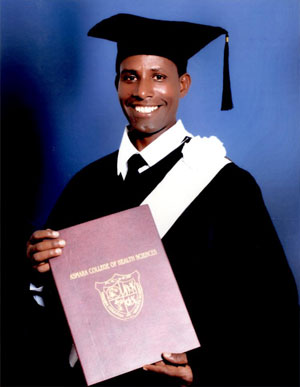 Being persistent and reaching your dream world is something most people fail to accomplish. It may seem an easy task to imagine that you can achieve whatever your heart desires if you work hard, but you need much more. Born in 1981, Mussie Andemesqel is a young man who believed, and worked hard to achieve his target. He is a man who came a long journey to make his dreams a reality. His relentless efforts paid him a qualification of Mental Health Nurse. Alongside, he earned titles of Associate Nurse, OR Technician, and Nurse Midwife. Q&A present you Mussie and his educational journey over the years.

When I was assigned in the military for my national service, I was among the many who were trained to be physicians. They selected us depending on our age and educational performances. The training included first aid and general medical education, while the main emphasis was on saving a soldier’s life at times of injury until he reaches the health centers for better medical services. It was interesting and as a result I had the highest score.

I have always wanted to upgrade myself and be in a better stage of life. That was my dream from the begining. But the main reason behind my inspiration came when I was nominated for a training as a physician at the military. That I can say changed my life. When I started working at the field I wanted to continue my studies with the profession. I mean, yes, I have always wanted to be a doctor/ a physician. But in reality I never thought I would come this far.

I decided to take the High School National Leaving Examinations when I heard I could get a second chance to sit back in 2002. I didn’t even hesitate. At that moment I was in Menedefera, so it was easier for me to get registered, but taking the exam was a bit hard for me because I had a national service duty to take care of, however none of this stop me. I studied every night with candle light while everybody was asleep. The good thing is that I had support from everyone, starting from the closest administrator to the regular person in the military.

Unfortunately, despite all the support, I only managed to score points for the certificate program. So I was left with only two choices. To join Teachers Training Institute (TTI) or the Nursing Schools. I prefered to join the Nursing School in Dekemhare for my certificate program. I chose to join the field concidering my previous skills as a physician. I wanted to support my profession with education. That was one of my number one goals. After completing my certificate in Associate Nursing, I was one of the students who received a chance to study OR Surgery Technician for four months. Accordingly, I was assigned to work at the Gindae Hospital, where I participated in several major and minor surgeries as head nurse.

Definitly not. Since I was previously working at the field, it wasn’t. I can say I faced a smooth journey and being among the highest scoring students, it was pretty much entertaining. Besides the will to study hard, I had a goal to be educated and come up with a change in my life. For your surprise, I was the only one from the national services applicants out of the 96 students there. My classmates had a nick name for me, “Shae’bia”.

Yes. They meant as someone who never surrenders. So they got me that nick name. There are still some people who call me that.

Because I thought I was on my way to my goal. I wanted to get my degree, and I always was ancious about that. It was hard for me to get time to study with all the work at the hospital and private in other clinics. So I had to ask for a month rest from work so I could study. As a result I got a degree score. But it wasn’t enough for me to join the health school in degree program, hence, I joined the diploma programe of the nursing school.

Because I believed that if I joined the department I was looking through the diploma program then I can upgrade to the degree program straight. That way I can hit my goal. And I did. I graduated from the nurse midwife diploma program with a commutative GPA of 3.7 in 2013. Then I chose to continue my studies with mental health nursing and graduated with GPA of 3.2 in 2016.

I loved to sit in the OPD room, talk to patients, hear them out and provide them with support. Patients need support more than anyone, that is what I believe. Meanwhile, this specific field deals with patients who suffer from mental problems. They are people who need special attention, care and support. The department is a new. There is only the Kidsti Mariam Hospital for people with mental disorders in our country. But with this new department, there is a plan to assign people at the referral hospitals on every region.

I recently have graduated, and I will be going to the Northern Red- Sea region to serve my community with my profession. Besides I still have plans to advance my studies further.

Yes. A generous soulmate, my wife, Masho Abrham We got married in 2013 and now having a two year old daugher. My wife had a tremendous backing in my educational journey. Besides my family, she is someone who pushed me far so much in my life and I don’t think an ordinary gratitude would suffice for her. I wish to make her happy and proud.

I want to say that youth is the backbone of a nation. If you don’t make a change in life right now, you are just simply wasting time. Young generation should work hard to make life better in their own way, either way; education or work. For those who are in high school, I advise them for the sake of studying not counting and just passing grades, because they surely will get their hard work paid in the future.

I should be thanking you.

“Shame on those carrying out FGM/C on our Daughters”, say village dwellers…