“Shame on those carrying out FGM/C on our Daughters”, say village dwellers… 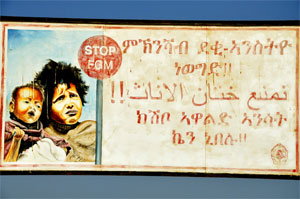 According to the WHO, FGM/C constitutes “all procedures that involve partial or total removal of the external female genitalia, or other injury to the female genital organs for non-medical reasons”. These practices are endemic in Africa with Somalia having the highest rate at about 98% of young girls suffering from FGM/C, followed by Djibouti, Mali among others (UNICEF Report 2013).

Incidence of FGM/C was also widespread in traditional societies in Eritrea. Its eradication has thus long assumed top priority through education and sensitization programmes to allay entrenched misconceptions enshrined in cultural beliefs. The fight against FGM/C has not solely started at independence but dates back to the time of the armed struggle. Rigorous mobilization and awareness campaigns were organized in schools and community meetings in those times in the EPLF liberated zones.

The task has continued with greater effectiveness in the post-independence period. In terms of appropriate legislation, the Government has enacted a law banning the practice in

The National Union of Eritrean Women (NUEW), the lead organization working for the total elimination of these harmful practices, could not, evidently, handle the task alone without including all national stakeholders. As it happened, religious and community leaders; relevant Ministries including the Ministries of Health; Labour and Human Welfare, and Justice; as well as UN agencies in the country are contributing in various ways in the concerted efforts to eliminate these anachronistic practices.

The eradication of FGM/C is of paramount importance as it constitutes a critical social, health and human rights issue. The practice of mutilating, cutting or even sewing the genital parts of the young girl can cause infections and heavy pain. It may also affect and be detrimental to fertility. Dr. Keseteberhan Solomon, from the Ministry of Health in the Anseba Region states that “FGM/C may entail death due to heavy blood loss. It may induce heavy pain causing mortal neurologic shock to the young girl during pregnancy and birth labor”.

These factors have indeed prompted the UN General Assembly to adopt a resolution for its global eradication in December 2012.

The NUEW and its partners have launched intensive sensitization campaigns throughout the country using documentary films and other tools for effective communication. These methods have proved vital in encouraging public discourse of sensitive matters which may have been regarded as taboos in traditional societies.

“Only when a woman is healthy can she become an active contributor of her household, the development of the society and the nation as a whole”, Mrs. Tsion Ukbamichael, administration and finance officer at the NUEW office in the Anseba Region, stressed in the interview that we conducted with her recently .

Robust legal provisions, intensive sensitization campaigns, stakeholder involvement and a bottom-up approach have, in combination, yielded impressive results so far in the reduction and elimination of FGM/C practices in Eritrea. As a matter of fact, the Anseba Region, which had a relatively high rate of young girls suffering of FGM/C, has made great strides in some of its sub-zones. “The eight administrative zones, including 37 villages, routinely organize meetings and sensitization campaigns on a continual basis”, Mr. Abdullahi Al-Amin, in charge of community affairs in the region, explained. The sub-zone of Habero and Asmat are leading examples in the combat against FGM/C and have managed to bring the rate to zero.

One of the members of the administration of Habero, Mr. AngesomTesfaselassie stressed that the willingness of the people, their level of consciousness and knowledge is high. “Local communities organized themselves through FGM/C committees and their tasks were to monitor, evaluate and sensitize and document the situation in their area. The initiative taken by the people is surely the motto of its success, Mrs. Meriam Ali, Head of NUEW in Habero stressed.

In Aretay, close to Habero, a family has a sticker on its door in Tigre which reads: “this household is FGM/C free”. The mother explains in a documentary film entitled Genablukado, “

that after being a victim herself of such practices due to the lack of awareness at that time, she wanted to ensure that their daughters won’t have to face a similar trauma”. One of the village leader in Habero also stressed that back in the late 1960s when his daughter turned 7, he warned his wife that if she would dare to circumcise their daughter, she would no longer be his wife.These stories are samples that show that through sensitization campaigns that engage both men and women as well as religious leaders and community leaders, the practices can become a shame to the village, accordingly a way to abolish it in the long run.

Comprehensive data collection has been made in the Anseba Region from 2008 to 2015 on the status of young girls below 5 years of age. The data show steady progress over the years. As Dr. Keseteberhan stressed, for those below 5 years old, about 25.6% or 941 girls were victims of FGM/C. The number dropped to 4% in 2012 with 207 affected girls. This further decreased to 2% in 2015 .

The positive results do not mean that one can sleep on his two ears. The ultimate objective is to see full elimination of the practice throughout the country. Continuous monitoring and evaluation, education and raising the level of consciousness through media and sensitization campaigns must be pursued to maintain and accelerate the momentum.