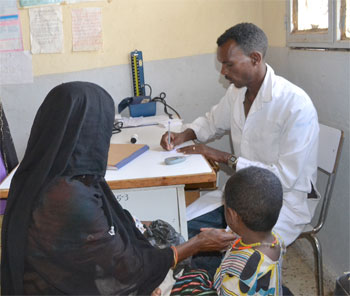 Health is a very essential component in life, as long as all the activities people engage in purely depend on it, every physical or mental performance. For that reason, people rush into health centers or a physician whenever they feel something out of ordinary.

The Government of Eritrea has been exerting relentless efforts from day one of independence to serve the people with the most efficient health service. Accordingly, a number of health infrastructures have been put in place in all corners of the country. In this issue, we will try to see the Anseba Region’s progress in the health sector and awareness of the people in this regard since independence.

The number of health stations in the Anseba Region has grown from only seven before independence to around 42 perfectly functioning health facilities at this time. The presently operational health facilities have close to 737 technical and non-technical staff, where the nurses carry out most of the services. Dr. Kesetebrhan Solomon, Medical Director of the Health Ministry branch in the region, pointed out that numbers do not tell the actual work performed, rather, the focus of the ministry is on the quality of service being delivered to patients in those institutions. He further added that their main targets are mothers and children. According to reports from the 90’s, only 6800 pregnant women visited health facilities to get pregnancy checkups, while the number of pre-natal visits to health facilities has exponentially increased at the moment. Indeed, the public awareness on health issues, especially maternity health care, could be measured from the sufficient increase of the visitors to health facilities.

Participation of mothers for regular checkups has grown dramatically. No mother wants to deliver a baby in the house but instantly makes it to the nearest hospital even those on the remotest areas. Mothers post pregnancy period are well aware of full check-ups including HIV for the safety of the family’s health status, by preventing the transmission of the virus from the mother in the unborn child if she already has it. Moreover, recently some of the institutions are providing additional checking for STD’s like Gonorrhea. Pregnant women who are unable to make regular visits due to distance problems are able to get services of waiting rooms until delivery times. Nevertheless, critics are on fathers’ side as they do not actually show up with their spouses into the health institutions at times of checkups, which can ultimately have a higher significance for a better safety.

The overall societal awareness in utilizing health institutions in the Anseba region has dramatically shown an improvement though some specifics remain. The reason behind this achievement can be said that the vigorous efforts of the Ministry of Health in making the effective and quality concerned service to the community. The main thing witnessed in the region is the synchronization of the communities and the health institutions in enhancing the health status of the overall population. Continuous training programs are scheduled for the available medical personnel in the institutions which plays a key role in development of the sector. Health committee are always in emergency state to evaluate the general progress of the population. On village level, the health institutions and the community get used to evaluate their works and as a result the present achievements are handed over.
Dr. Kesetebrhan further stated that it is much costly to cover all the expenses for a pregnant mother’s general checkups throughout the nine months to even after delivery and vaccination of the new baby in other nations, but recommends mothers to deliver their babies in these free of charge health institutions of our nation.

As the region is stretched towards neighboring nations in the west and borders with other parts of the country, it is prone to communicable diseases. The due care of the Ministry of Health made it possible that the population remains safe from the prevalence of communicable diseases, it is fully under control and so far, no significant damages has been reported. The branch of Ministry of Health particularly assigned for the task is on a regular basis performing its precautions for possible outbreaks. On critical situations, the regional administration calls on every higher division in the region and discusses the way out and formally execute health campaigns, and people individually also report periodically at times of suspicion.

The authority reports that children receive up to ten types of vaccinations at the moment. Based on the data from the health facilities scattered all over the region, child mortality mostly occur from pneumonia and diarrhea. Yet, vaccination for these two diseases is also available momentarily. The wide coverage of the institutions distribution has helped people get a quick access to medical services on a daily basis. For close area residing population a once per week and for remote area inhabitants a monthly schedule of treatment is programed. Most of the credit however should be given to health personnel who are relentlessly devoted in providing the vaccination services, campaigns, and other activities to the limit of knocking doors steps of the population. Nowadays, Dr. Kesetebrhan proudly utters that over 95% of the region’s children are vaccinated.

Environmental sanitation inclusively is taken into consideration. A division is selected to monitor and keep the sanitation of the region. The health committee are always informed to deliver messages regarding sanitation campaigns for the community. Public wash rooms are made to be kept well as they could be the spots to preserve environmental and personal sanitation. Some of the health stations are on paper work process to make them fully equipped stations with laboratories that can aid the given facilities. The gigantic hospital which is getting build in the town of Keren is a comprehensive type which is expected to provide a wide range of medical package. Ambulances to most and remote spots are already facilitated. The towns of Kerkebet, Hamelmalo, Agmait and Adi-Tekelezan can be said have partially solved previous shortcomings in transportation.

Dr. Kesetebrhan finally recommends that there shouldn’t be a mother which gives birth to a child in her house when we are still out there, and equally a child shouldn’t be left unvaccinated after the government and ministry are contributing ceaselessly to the safety of all. He further added that there is nothing important than the life of a mother and children since they are the future. Mothers should check themselves regularly from the day they find out that they have conceived. Most of all, Dr. Kesetebrhan endorses patients not to listen to people around them except their physicians when even a prescribed meds makes them feel strange, they should rely into visiting the health centers again, because the habit of stopping meds still exists and that should be a solution. Generally speaking, the population dramatically registered a substantial synchronization with the health institutions to make it a hand and glove task which looks forward.