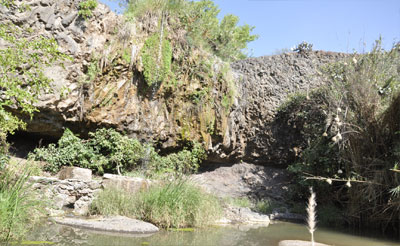 I thought hard and long on what the title should be to the things I am about to tell you in my article. You probably might be thinking how possibly a shower could ever be holy, or consecrated, as a matter of fact.

Well it can, and it’s very well true.

In Eritrea, all of the communities practice, prevention and healing of certain ailments through rituals. The common use of amulets, especially in new born babies could be an example, they serve against the evil eye or venomous animals.

But that of holy water, called Mai-chelot in Tigrigna, is a trait of the Orthodox religion. Normally it is aimed at healing mental illnesses, but nevertheless also works, just as fine with any other illness: bones, skin, cramps, tumors… you name it.

I am not taking about demonic places of trickery, exorcisms where screaming and shouting come out of tormented people. No. If anything else, I am talking about undisturbed, serene areas.

It is interesting how every single holy water spring, or may-chelot, has its own field of specialization. For example, Adi Raesi May-Chelot, under the custody of Saint Michael is known for having supernatural powers in healing mental illnesses. While the hot springs of Mai Wu’ie, in the Northern Red Sea Region, does wanders with illnesses related to bones, muscles and rheumatism.

There are no doctors in these spiritual places, but saintly healing is usually associated and highly regarded, so much so that over centuries, it became a learned institution, whereby rituals added by the communities’ prayers, help sick people regain health.

Clergy men and women, just like doctors and nurses would do in hospitals, visit the pilgrims with the prayers’ book in their hands; they talk to the sick ones, they check on them and intensively pray for them.

These place are green, and when I say green, I mean thoroughly green; rich in vegetation. And quite… incredibly quite. All you can hear is the sounds of birds, crickets and the churches’ bells.

With countless of big trees surrounding them, and clergy servers, men and women wearing white humble wardrobe: respecting the ‘church’ dress code and walking delicately and silently venturing on their clergy duties, people bowing and throwing their hands towards the sky begging God for mercy while healers (the clergy men) practicing intensive prayers… it is just incredible. An otherworld scenario!

So incredible, in fact. Even if one is not new to the place, I am most certain that just like me, at some time there comes a common thought that kicks the head: “Am I dead?…and if not exactly the same, something very similar to that.

I keep ironically thinking, that Dante Alighieri would have made La Divina Commedia’s Paradiso, far better if he had visited these holy places!

Anyways, Christian followers believe that Jesus’s baptism by Saint John in the River of Jordan was a holy act of repentance, and they believe that ever since, people have been guaranteed with a permit to actually have their sins washed away by water. In technical words this meant that, since Jesus had no sin, but as God himself, his baptism had the effect of making the holy water an instrument of life, a way of repentance, a way of seeking spiritual healing, bodily cure and human salvation.

Henceforth, throughout the year, fonts of holy water are blessed according to the rules and calendar of the Churches. Normally though, these rites, which mostly are composed by prayers, habitually include the Covenant’s trip to the nearby river, lake to bless the source of water.

As a result, this way people can actually use the holy water for salvation.

Going back to the shower though, why did I say shower? That is because naturally, but not in some extremely few cases, the holy water is distributed not in pumps or bottles. On the contrary, the water runs down cascades, that specific area were the river pours down from four and beyond meters that is actually where people stand under the torrent of the waterfall.

According to the prescriptions, the shower under the holy waterfall, is ordered twice a day: at six in the morning and six in the evening, for fourteen consecutive days. The water comes running from above four meters and more, hitting you in the head knocking demons, illnesses and frustration out of your body. Theoretically one is supposed to deliver his/ her prayers while under the shower.

No soaps, shampoos or towels. Just you, your body and your soul under the holy water!

You necessary don’t have to be sick to be there. One can just go to be in touch with inner thoughts and inner self.

These institutions provide you with a shelter, and people by default, share the food and drinks they bring from home.

In the run of fourteen healing days, you would be required to be less materialistic and more spiritual, as much as you can. So for starters, no skin moisturizing products, no music or anything else you’re fond of. As per food no meat or any delicacies; discipline yourself with beans and humble dishes!

Moreover, short visits are allowed, anyone can go to take a shower and fetch some water for home usage. You don’t necessarily need to fetch a whole gallon, get a small cup even, a few drops of it could bless a whole dam.

Eritrean Christian families often bless themselves by drinking holy water, it is kind of a common tradition to keep a small quantity of it at home appended on top of the house’s main door.

It may also be used for informal blessings when no clergy are present. For example, for many sleepy head children, the morning alarm happens to be a strong sprinkle of cold water in the face alongside mummy’s morning prayers. Jokes apart though, it is tradition for parents to bless their children with holy water before they leave the house for the day.
The use of holy water and its believed super powers is massive in Eritrea. Yearly, hundreds of thousands of Eritreans flock to these holy places.

They are available for everyone and anyone, even for other faiths. And this is where I proudly dare to specify one of Eritrea’s rare beauty. Religion is not a matter of discrimination. Muslims do visit these Christian places and Christians do certainly share Muslims’ best practices.

It is massively superb how, even though Eritreans are of two religions, they equally exchange and rejoice in rites of some very special and sanctified blessings, as they genuinely have faith in one another’s values.

In today’s world, where technology has triumphed over spirituality, it is actually doubting that such places and ancient beliefs, such as that of holy showers, gloriously survive in our world’s chaos… a place where illness are cured no matter how deadly they could be, places of miracles and healing….. Well folks, they do exist and work wanders: in Eritrea!