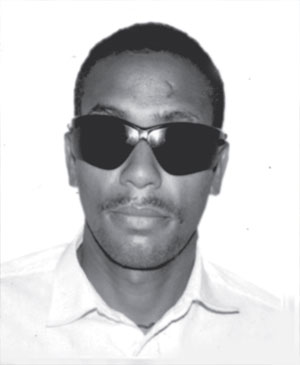 It was in 1991, six month after Eritrea was liberated. I traveled to Kudo-felasi, where the place was a military camp for the enemy. I was just five years old and I found something to play with, but it turned out to be an explosive. The explosion injured both my eyes and part of my hands. I had to stay in a hospital for several months. Later, I started my education at Abrha Bahta School for the Blind. My mother and uncle took me there. I remember at the time, I had stressed so much because I missed home. But then I became friends with those who were there before me.

It was one of the best opportunities ever in life. It was the first breakthrough for me to be a part of the outside world and pursue my education. Indeed, I would say it was a special juncture for me to accept my disability. By the way, I would like to thank Tesfa Solomon, who works at the Ministry of Labor and Human Welfare.

It was only my left hand which was injured, and because I was right handed it wasn’t a problem for me to write.

It was different.Abrha Bahta was a boarding school, so it was much easier for everyone to learn. After completing our elementary years, I and my colleagues from the school had to rent a house and continued our education at Bana Junior School. Still, I was one of the best students there.

It was hard for me at first, especially the first month. As I said, we came from a life where we were provided support with everything we needed. So, various things, starting from the financial constraints to getting school materials were a problem. But that didn’t stop me, I was using the brail book I got from Abrha Bahta School to study. The students on their part were a great help. They helped us by reading the notes that were given by the teachers. At the time, there were eight students with visual impairment including myself.

I learned my 8th grade at Sanjorjo School in Mendefera with several visually impaired students. Afterwards, I continued my 9th and 10th grades at Deneden Secondary School here in Asmara. But by the time I was in the 11th grade, I started to be interested in music which lowered my grades. Regardless, I went to Sawa to complete my 12th grade and take the National Matriculation Exam. I had a satisfactory result for me to join the College of Arts and Social Science in Adi- Keyih.

I felt like it was the safest place for me. I mean, as I mentioned before, I had to financially support myself which was a bit hard. But in Sawa, it was different, where you are provided with everything you need. Putting all this to my benefit, I had my full time to concentrate in my studies with nothing to worry about. That is why I had good results in the exam.

It was good. I had assistance from every one even from the teachers. I was fortunate enough to have teachers giving me tutorial classes.

College is a different time for everyone. It is a time where you change your way of studding and way of approaching the education. So, college has even complicated my way of tackling the difficulties I used to face. Studies before college are easy and limited, whereas in the higher level, you need to explore books and research more. So I faced shortage of brail books and educational materials. It was hard for me to get more information and timely books. Consequently, I had to shift the way I study to computer aided. Again, that wasn’t easy, for the 1st and 2nd year, we weren’t able to use our own computers. As for the following years, with the agreement of the college, computers were assigned for us to use for studying. That was a step forward for me in my educational journey.

I was influenced by politics and prevailing state of affairs because of my classmates and teachers in my early ages. By the way, I want to thank the man who has helped be to have the fluency I have in Tigrigna language and to recognize the Global Geographical Topography, Teacher Yonas Weldai.

After graduating, I was assigned to teach politics in Sawa for a year. Besides, I thought history in Adi-Ke Secondary School starting from 2012 to 2016.

Political Science is a field that studies financial, social and cultural studies. So history is one of the main basis of the field. For me to be a history teacher was an advantage.

I am strongly interested in music. Even though my hand is incapacitated, I can play some musical instruments. I play Kirar, the traditional string instrument, flute, and to some limit I can play the guitar as well.

I had a short course given by a music teacher Yonas Weldai, but again I play out of hobby.

I am not that good, but I can say I rely on myself without depending on others. When I was in college, it was a great help. It was useful for me to read and study my notes and I was able to present my research paper.

Yes I am, I got married a couple of months ago. We met in college.

I am ready to work. I was educated so I should be able to work. But I feel like we are in a world where technology takes over. I advise for those who are living with disabilities, to be acquainted with technology. Especially people who are visually impaired should learn to use technology which will make their works much easier. It would be good for those who employ people with disabilities to help them by providing the necessary technological supplies they need.