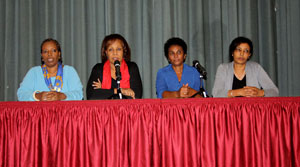 The National Union of Eritrean Women branch in Europe conducted its annual activity assessment meeting in Frankfurt, Germany, from 25 to 30 October.

Asmara, 04 November 2016- The National Union of Eritrean Women branch in Europe conducted its annual activity assessment meeting in Frankfurt, Germany, from 25 to 30 October.

The objective of the meeting in which Ms. Tekea Tesfamicael, President of the NUEW attended, was to identify the positive sides and shortages to achieve the objectives of the union and chart out future programs.

Moreover, seminars as regards sharing experiences, conflict resolutions, and the objective and motive of psychological war fare as well as nurturing competent and resourceful youth were conducted.

The Chairwoman of the branch, Ms. Nigisti Tsegai called on the participants to back up the national development programs.

In the same vein, members of the different national associations in Switzerland held seminars on 30 October in Berne.

The Charge d’Affairs at the Eritrean Embassy in Switzerland, Mr. Bereket Woldeyohannes indicated that the harmony between the people and Government of Eritrea is the corner stone for the success of the national development endeavors. He also called for strengthening participation in the efforts to ensure social justice and economic development.

The participants on their part expressed conviction to augment participation in the national development programs and to reflect the correct image and value of their country.

Call made for proper nurturing of children