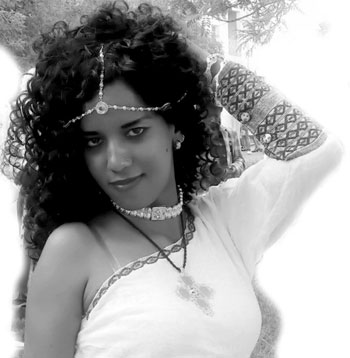 Here is the deal with this amazing young woman; she has an incredible narration style. Trust me whenever she narrates stories, one instantly gets A. immersed in the story and B. start wishing for the narration never to end.

And this is harder to explain because my page can’t intone but I have her here anyways. Call her a modern female Homer in the making! My guest for you today is one of our country’s youngest jewels of poetry and storytelling: poet and author Ms. Ariam Weldeab!

It’s me! I was born in 1990 in Sahil during the armed struggle. My parents got divorced since I was young so I was raised by a single woman: my mother is a pharmacist and my superhero. Not only did she help me realize the importance of education but she also recognized my talent at the age of two! She recorded everything I said, and now when I hear myself talking in the recordings, I keep telling myself I was a chatty kid!

The author and the poet

The Ethiopian offensive occurred when I was in third grade, I remember clearly. Back then, everyone was joining hands in all ways possible to assist the cause of sovereignty. To that extent my elementary school called for a parents’ meeting and there I read a poem for the very first poem.
“Could I write poetry too?” I thought to myself afterwards. And that thought prompted me to write, or at least to envision myself as a poet.

I read every issue of local newspapers, the novel pages were and still are my favorite. I snooped at novels and constantly tuned to Dimtsi Hafash (Eritrean Radio Broadcast). So when I started seemingly to do my poetry, which back then was all about putting together words of the same rhyming scheme, I enjoyed reciting my poems to my neighbors. Also, I started reading and narrating novels, while recording myself on tape cassette.

I eventually made it. In Dimtsi Hafash, I mean. I contributed in the Sunday morning children program. I enjoyed every single moment in which the radio MC announced my name.
But now you write and narrate your own works
I do. I do poetry, short stories and novels.

How do you incorporate the three?

It’s easy. It depends on the state of mind I am when actually doing one of them. What I mean is, that each of those activities have independent inspirational muse that motivate me differently and diverse occasions and locations.

I tried to expand my stand up shows beyond the borders of my country. I went to Uganda and received a reception beyond my expectation. The embassy of Eritrea in Uganda assisted me greatly.

The show has a beautiful composition: it incorporates storytelling and a band and guest singers for music that best fits the narration. So, what the stake holders and I would have going is practically, a story night. The viewer’s rate is amazing, and impressively even on YouTube.

I tend to do poems a lot, so about 50 them. My short stories reach 40 and 2 major stage dramas. Both of them received awards and a massive attention from the public.

Once upon a time

Alright, one of the stage dramas’ title is ‘Double Aim’. I will tell you about it.

So the story is about a young high school student, who got a school assignment of researching a story on Eritrea. As her mother was a freedom fighter, the student decided to write about her mother. However, her mother refuses strongly and convinced her daughter to write of an old friend, a fallen hero whom passed gallantly for the cause of independence. The daughter was finally convinced and started doing her research on her mother’s martyr friend.
Everything she found about the martyr amazed her epically. Her research is submitted and she receives an award for it. But what the student hadn’t had realized while working on her paper was the fact that she was actually working on the story of her biological mother. She eventually finds out later, when her adoptive mother tells her how she is the descendant of a heroine.

Most of your works are highly patriotic

Although I do have premises of several topics, I choose to evolve my short stories on events and themes of the armed struggle, also, premises of independence, sovereignty and martyrdom and so on. After all, the fact that we paid a heavy price is impartially a common knowledge.

Question is, how good we are, in actually delivering these premises. You know, I am convinced that compared to its depth, we artists and authors in general, haven’t even done the minimum yet.

Now, leave writing about those noble years out and, does this generation even know of its massiveness? So for now, it would be good enough if we start acquiring every bit of that period along with its incredible values.

I was raised very close to the history of the armed struggle. The bequest of every Tegadalay (freedom fighter) is deific, so not to be taken for granted or lightly, for that matter.
I try to relate to the sacrifices of the Eritrean people as much as I can. The notion of the nation’s love and patriotism, should be built-in impulses within one’s existence, independently from other concepts.

Time might change but not history… so who should be the one to write about our accounts? … No one but us. Let’s document our roots! …Seriously!

Thank you a lot, hope to hear more of you!

From Book Shelves: Reading about Modern Architectures in Eritrea