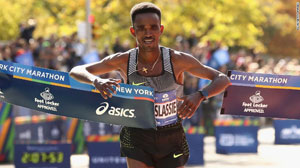 In the New York City Marathon in which renowned athletes from Africa and from around the world participated,  Athlete Ghirmai, 20 years of age, won the race in 2:07:51 seconds followed by Lucas Rotich of Kenya, who ended the race in 2:08:53.

Ghirmay Ghebreslassie has become the youngest ever to win the race. Athlete Ghirmai said that confidence in his competence was highly decisive for winning the race.

For Athlete Ghirmai, the New York City Marathon is a third race in just one year.