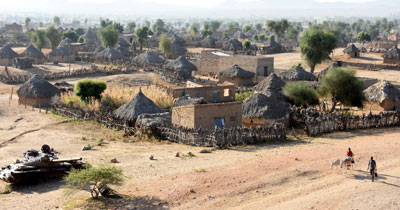 Rural development is the process of improving the quality of life and economic well-being of people living in relatively isolated and sparsely populated areas.

Rural development has traditionally centered on the exploitation of land-intensive natural resources such as agriculture and forestry. The need for rural communities to approach development from a wider perspective has created more focus on a broad range of development goals rather than merely creating incentive for agricultural or resource based businesses. Education, entrepreneurship, physical infrastructure, and social infrastructure all play an important role in developing rural regions. Rural development is also characterized by its emphasis on locally produced economic development strategies. In contrast to urban regions, which have many similarities, rural areas are highly distinctive from one another. For this reason there are a large variety of rural development approaches used globally.

Rural development actions are mainly and mostly to development aim for the social and economic improvement of the rural areas.

This article is an attempt to discuss rural development, it is an assessment on the rural projects’ planning and implementation process in Zoba Gash Barka’s sub zone Shambko and eventually also looks at the impacts they have on the life of the beneficiaries.

First according to Administrator of the sub-zone Mr. Tesfai Bairai, Sub-zone Shambko is found in Zoba Gash-Barka and consists of four ethnic groups, mainly Tigrigna, Nara Saho and Kunama. Nara and Kunama are thought to be the indigenous inhabitants if this region.

The livelihood system in this region which also covers sub-zones Lalay Gash,  Kebabi Tokibu, Brar, Dase, Kuluku, Fode, and Shakat from sub-zone Gogne and Sosena, and Asheti from sub-zone Barentu is Traditional Sedentary Agro-Pastoralism. The ethnic groups that are found in this livelihood system, Tigrigna, Kunama, Tigre and Saho, the Tigrinya whose ancestors migrated from the highlands are agro-pastoralists like the Kunama who are the indigenous inhabitants of the areas. Both communities are sedentary that live in permanent villages and share common Christian belief although there are some Kunama whose religions are outside Christianity. The Saho and Tigre are also descendants of migrants from other parts of Eritrea but are followers of Islam. For all the communities’ agriculture and livestock have equal importance. The major source of their livelihood is agriculture and livestock; however all communities are engaged in trade of livestock, livestock products like butter and crops and other off farm activities. For instance in sub-zoba Lalay Gash around Augaro, gold panning is practiced by many households to supplement their income.

The Sub-zone of Shambko before independence was considered to have been one of the most deprived regions in Eritrea. Illiteracy levels were quite high as compared to other sub-zones found in the region. Given that the settlers of this region were dependant on a livelihood system of Traditional Sedentary Agro-Pastoralism, it never had the opportunity for education.

However, since independence the Government of Eritrea’s efforts to close the social and economic gap between urban and rural areas can be seen to have yielded dividends in this region. The implementation of equal social services brought about changes in the infrastructural change in the region. For instance, the region now has 25 educational institutions, of which 19 are junior, 5 elementary and 1 high schools. In general the region encompassed various health centers and access to potable water and part of the regions consistent efforts to development include conservation of soil and water, crop conservation. A recent voluntary campaign in construction of roads by the regional settlers can be sited as an example.

The major development stride in this region can be noted in that of agriculture. The region over the course of this past summer had considerate amount of rainfall. According to the

manager of the sub-region’s division of Ministry Of Agriculture Dawit Gebrezghi, noted the region received a maximum rainfall of 64mm to minimum of 0.5mm, in total 415.15 over 36 days. Given the heavy rainfall the sub-region was able to cultivate a total of 17,790 hectares, with the help of 36 machineries. Currently the division estimates that the cultivated land will have high dividend, which can possibly be 18 quintal per hectare. Beside the region receiving good rainfall this past summer, the people have had to put tremendous efforts over the course of the year in preparations for the upcoming summer.  For example, the region was engaged in their yearly soil and water conservation activities.

Development, a non-ceasing phenomenon as long as mankind has dwelt on this planet, IS a complex matter which encompasses the three bottom-lines, i.e. social, economic and environmental aspects and aims at improving the quality of life.

In fact, development issues are always challenging countries and their leaders as they try to introduce strategies and projects to benefit their rural sector which constitutes, especially in developing countries, most of the population who are living in poverty and continuing to stagger in very destitute level. Then accordingly, the sub-zone of Shambko over the last twenty five years with the help of the Government of Eritrea and the residing population, have been working relentlessly to develop the social and economical set up of the sub-zone, as such it can be seen as a model  to the rest of the neighboring sub-zones.