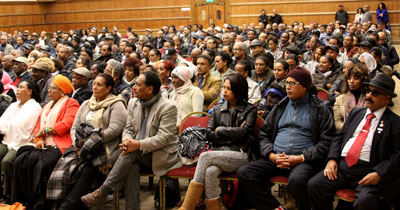 At the seminar the Eritrean nationals conducted on 13 November in London, the Eritrean Ambassador to the UK and Ireland, Mr. Estifanos Habtemariam gave extensive briefing on the objective situation in the homeland. He also underlined that the secret behind the progress Eritrea is registering in all sectors is the strong commitment and resilience of the people and the government.

explained on the significance of strengthening organizational capacity for national interest.

The Charge d’Affairs Mr. Suleiman Hassan on his part gave briefing as regards Consular services and duty and rights of citizens.

In the same vein, members of the YPFDJ branch in Southern Germany conducted tjeir annual meeting on 12 November in Stuttgart.

Mr. Yohannes Woldu, Charge d’Affairs at the Eritrean Embassy in Germany, Mr. Kahsai Tewolde, representative of the Public and Community Affairs as well as Mr. Russom Araia, Secretary of the branch, gave briefings as regards the objective situation in the homeland, current situation of the national associations, the newly issued national identity cards as well as on the national development endeavors.

The Eritrean National Committee in Germany also conducted an assessment meeting on 12 November in the city of Manheim.

At the meeting in which members from 20 cities attended, the Chairman of the committee, Dr. Tesfai Ablelom indicated that the objective of the meeting was to strengthen organization and reinforce participation in the national development endeavors.

Discussions on identifying the professional capacity of nationals and participate in the nation building process, organizing sustainable awareness raising programs, and strengthen

public and diplomatic activities as well as charting out activity programs for the year 2017.

Likewise, the NUEW organization in Italy conducted its activity assessment meeting on 13 November in Milano.

The Eritrean Ambassador to Italy, Mr. Fesehatsion Petros underlined that the role of the NUEW in Italy in the nation building process began in the early days of the armed struggle for independence and called for the preservation of this unique value and transfer it to generations.

Ms. Negisti Tsegai, Chairwomen of the NUEW in Europe, gave seminar focusing on gender equality and the role of Eritrean women in the national development programs.

The guest of honor, Ms. Hanna Simon, Eritrean Ambassador to France, gave briefing regarding the role of the Eritrean people residing in the Diaspora in the national development programs.