And more of Prof. Ted; a preview… 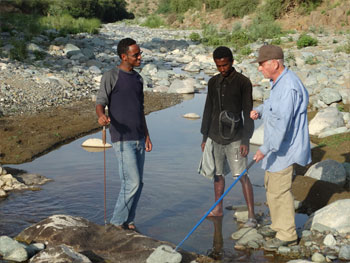 One thing that we highly focused on was the cooperation between the University of California and the Ministry of Agriculture’s forestry and wild life branch. Previously we worked on printing posters as to raising awareness about these locally unknown creatures.

Since my last survey, I keep realizing that in Eritrea the biodiversity is so vast; which is exactly what makes this trip a lot more motivating and excitingly; I am staying longer than my previous stay.

One new thing: I found a Side Neck turtle! Most probably a lot of people don’t know of its uniqueness, but the Side Neck turtle is another extraordinary creature unique to Eritrea, and it’s found nowhere else in the world, but in Mendefera, near Keren and Ghindae areas.

This fresh water Side Turtle was first scientifically described in 1834 in the Ghindae area. Most turtles pull their neck inward, while these ones, their neck is so long that they have to turn it sideways for protection. And the reason why these turtles are found there, is because, the water bodies in the areas are extremely clean. If pollution had have been widespread in Eritrea, it will surely would have destroyed your water bodies then the Side Neck turtle and many creatures would have not sustained beautifully as they have so far.

Local people are very knowledgeable about the wild life in their immediate area. When we asked about the turtle we found a man in a small town and he took us to the river and there it was!

Similarly, we asked a group of young people working by the river, and they knew exactly what we wanted. If I had gone alone, most probably, I would have walked the whole day without noticing even one.

But people here do not realize how important these creature are. And it should be your job to spread such information. Okay luckily and gratefully the Eritrean people are sensible towards nature, but it would be even better if they’d know exactly what they’re keeping an eye on. You should write and work to raise public awareness on friendly creatures that need your attention.

It is actually very amazing for a country not so big to be rich in biodiversity. When you travel from Asmara to Massawa you have three seasons; it is an amazing experience when you start at 2 hours above sea level, and you witness a massive change in biodiversity while doing down to Massawa.

There is a lot more, in Massawa for example, we found this gecko lizard that comes out at night. One could easily notice even while dining outside restaurants. These geckos were first scientifically described in 1827, and at the moment we are waiting for a DNA test. Also as part of my venture I also made sure that there are 36 pieces of snakes in Eritrea.

Actually it is not. For the reason that 75% of them are harmless, only the remaining 25% are poisonous. It’s important for people to respect snakes equally as the rest of wild life.

And it’s something that never ceases to amaze me that people are highly cognizant of protecting the forest and small animals: but they need to know that snakes too, should be left alone.

Rightfully, every time a person sees a snake automatically tries to kill it. Two weeks ago, we were out doing our field work at the Dubarwa river, and we were actually looking for toad so we could take a new picture for the posters, and then at night suddenly one of the young men that works with us, saw a big snake; an Egyptian Cobra probably, a half meter long. But it did not harm us, as normally those snakes, go up and examine if there is a threat before biting. They are so smart that they watch you ahead. Both my team and the cobra, had a common interest, it was too looking for a toad for dinner.

I think for the future we will put together additional identification posters of dangerous and non-dangerous snakes.

This is a continuation of my first trip. I came here at first to have a general look, convinced that I would have so many things to look for and so many links that can serve as answers to previous researches. Important Mammals, amphibians and reptiles that are either unique to Eritrea.

So what I am doing exactly at the moment is a continuation of the study on why Eritrea is so distinctive. We are trying to document as much as possible and also do DNA test with the collaboration of the University of California. Moreover, we’re working hard to see if we will be able to detect existence of new species.

You see, there is abundant knowledge about the birds and mammals of Eritrea but little of reptiles and insects, so that’s why we are looking for bridging the gap of research. To that end, we are training two youngsters working at the Ministry of Agriculture, I am giving them all of my all, as I want this to go on even when I am not around. And I have plans to teach more people next year as well.

Normally even without me here, field study is always organized and conducted in the protected area and enclosures on multiple topics, and I hope for my tips to come of handy.

The first part focusing on high elevation areas such as Filfil, Mendefera and Keren, is now over. While the second part will be more of a detailed survey in Massawa; where I am certain of coming across tons of surprises. I mean, who knows if as we speak some new species of lizards or geckos are coming out before the sun set?

I am staying for 3 weeks so this will be an extensive study, of course we will do more in the future, but for now I hope to successfully document links to historic localities of the small creatures particular to Eritrea.

Always great to be back!