“Hygiene is the Mother of Health” 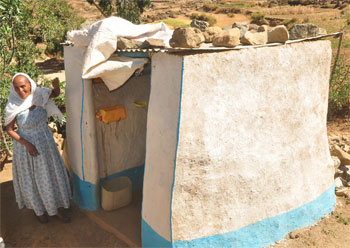 Nothing is more refreshing than going outside of Asmara, to the surrounding villages which continue to keep the charm of the past reflected through their traditional hudmo houses, made of mud, wood and stones, standing for centuries in the highlands of Eritrea. These houses, painted in different colors coupled by the warm hospitality of the inhabitants, the sound of the cattle, and the refreshing breeze of the farmlands complete the scenery.

Elders with their walking sticks and their netsela gather under trees discussing village business while children play around with their homemade toys.

This relaxing setting is quite rare to witness in Asmara nowadays, thus it becomes a must to many urban dwellers to take a break and travel to the countryside. That is what I did last Monday, both for work and for leisure; I paid a visit to the village of Geremi, situated in the Serejeka Sub-zone. Spending the day in this village was an occasion to witness some development work undertaken thus far to improve the daily lives of its people. This beautiful village is home to about 2000 inhabitants and offers a landscape mixed between hills and valleys and it conserves its traditional settings with indefinite horizon of hudmos.

This serene scenery though had one displeasing feature on the picture, especially in regards to its houses. The lack of latrines built with the house despite this becoming a thing of the past. Indeed, open defecation has remained one of the challenges to overcome in safeguarding water, hygiene and sanitation as part of the development plan in Eritrea. Village dwellers have used this method for extended time but currently with the growing population density as well as an increasingly educated society, open defecation has been put at the forefront of public health workers’ battle in the country. Going villages after villages to raise awareness and evaluate the sanitation situation throughout the country isn’t an easy task, as it requires a change of traditional habits through capacity building and social mobilization. In doing so, the Ministry of Health in partnership with the UN Children Fund (UNICEF) has embarked in a campaign for rural sanitation coverage through the Community- Led Total Sanitation (CLTS) approach since 2008.

In fact, I was accompanied by staff of the Ministry of Health, the public health unit, environment and hygiene unit, members of the administration of the Central region and local administrators to witness the progress made in the village of Geremi. Hence, the rural community is also part of the CLTS campaign in moving away from the practice of open defecation in the country and eight years after the launch of the campaign nationwide, Geremi has officially became the 87th village Open Defecation Free (ODF) in the Central region. As a matter of fact, while I put myself away from the group, walking around the village, I realized that all households built up latrines with each one of them having a little designing touch, be the painting on the wall or the colorful piece of cloth used as a makeshift door and the written proverb on some of the walls “Tseriet Ade Teena” or “Hygiene is the Mother of Health”. Women were proudly showing off their hard work as Mrs. Luul Okbamichael who also made her own hand washing container on the side of her family’s latrine explained to me that she no longer needs to go far away to be out of view thereby preserving a clean environment around her home.

Indeed, the example of Geremi is one among many villages where the effect of improper sanitation system used to be the causes of the spread of communicable diseases such as diarrhea as well as affecting the environment and contaminate water bodies. In Geremi, for instance, the excreta/waste will directly move towards the water dams or rivers in the surrounding areas especially during the rainy season. The obvious trickle-down effect, henceforth, is that it impacts the public health of the country as a whole.

Looking into context, improving the sanitation system in rural areas was firstly introduced by the Government of Eritrea through “high end toilets” requiring specialized labor and materials. Only few could afford its construction and subsidies remained limited resulting in the low registered rate of sanitation coverage to 16.3% nationwide according to the Ministry of Health (MOH) and UNICEF joint report of 2011.

The CLTS, on the contrary, aims at training all stakeholders from government bodies, health workers to village leaders as well as establishing a hygiene and sanitation committee to enable all citizens to own this initiative. The approach remains cost-effective by ensuring that any citizen can build his own latrine with basic materials at hands and without heavy labor effort. Accordingly, the initial stage of the initiative started by taking two pilot projects in the villages of Adi Habteselus and Halibmentel in March 2008. Through the pilot projects, already 400 people were trained nationwide between July 2008 and February 2009 and from this day, about 7,000 village health promoters were trained on CLTS. By October 2008, the first pilot village of Adi Habteselus was declared ODF status.

The campaign started intensively by the MOH’s Environment and Health unit enhanced with the establishment of its National Rural Sanitation Policy and Strategy Direction in October 2009. Quickly, the campaign started to show positive results and acceptance from local communities that totally around 146,000 households (about 733,000 people or 31% of the rural populations) were declared ODF since 2007 (CLTS, July 2014). Surely, the work is still progressing in getting rid of such practices. Thus, Geremi has become one in these past weeks and the remaining villages of Meqerka, Emba Dorho, Beleza, Daero Pawlos, Adi Hakefa and Adi Borokhai within the Central region, are planned to meet the target by the end of December this year allowing the region to own a status of 100% ODF.

During the day spent at Geremi, it was the occasion to congratulate villagers for their efforts through an official ceremony in which the local Administrator, Mr. Petros Andom, received a certificate on their behalf. As a matter of fact, the 243 households of Geremi are now using latrines completing the portrait of the already 24,000 households’ ODF in the Central region. Dr. Tesfai Solomon, Medical Director of the MOH’s Central region branch, warned the inhabitants that “we cannot compete between the investment made and the long-term outcomes we will expect out of it, the question is, are we going to use it properly and avoid more than 90% of the communicable diseases”.

The words of Dr. Tesfai were seconded by Dr. Tesfu Fessehatsion, administration of Serejeka sub-zone, who expressed the importance of “continuity of achievements”. Certainly, changing the traditional habits is a long process explaining the delay in achieving ODF status at national level. Surely, the question of leadership of community and religious leaders, having a hygiene and sanitation committee as well as a system of monitoring is key here. As Mr. Kaleab Tesfaselassie, Director General of Social Community Unit in the Central region, highlighted that, “it’s not about exhibiting your latrines but in using it appropriately”.

In fact, great progress was registered so far in Eritrea and particularly in the Central region with about 94% of sanitation coverage registered this year. Nonetheless, keeping the momentum through proper evaluation and monitoring of the use of latrines and its hygiene situation requires endless commitment. Without a doubt, this community-led approach aims at building a sense of ownership to villagers in keeping their rural community and environment safe and clean. In doing so, Priest Aboy Mengis stressed sustainability and respect of the environment is each citizen’s responsibility. To ensure the continuity of this responsibility, mechanisms are put in place as for instance in Geremi, the committee of sanitation and hygiene will have the task to evaluate and monitor the situation of the local community in a constant basis. Any misbehavior in this respect would be reprimanded a fine up to 500 Nakfa and similarly in other villages, this system of fine is also implemented in line with continuous awareness campaigns.

Clearly, the issue of hygiene and sanitation is a work in progress within the development path as well as ensuring the health of rural communities. The question of sanitation coverage is slowly showing positive progress in Eritrea aiming at meeting the 2030 Sustainable Development Goals on water, hygiene and sanitation of having an ODF society while keeping the traditional Tigrigna proverb of “Hygiene is the Mother of Health”.