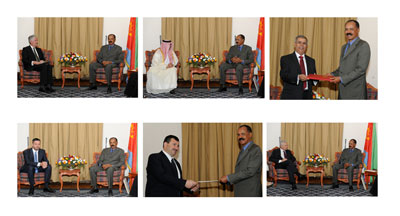 During the presentation ceremony at the Denden Hall with the Ambassador of the UK and Northern Ireland, President Isaias referred to the negative and unwarranted stance of the British Government on Eritrea in the past years.   Eritrea wishes to foster good ties with the UK and will not spare efforts to promote this objective, President Isaias underlined.

In the subsequent meeting with the new Ambassador of the State of Qatar, President Isaias expressed Eritrea’s satisfaction at the warm bilateral ties that exist between the two countries and stated that Eritrea will exert further efforts to widen the scope of the cooperation in the period ahead.

President Isaias elaborated, at the meeting with the Israeli Ambassador, the ramifications to the Horn of Africa region of the problems in the Middle East and the manner of their resolution.  In this respect, President Isaias underlined the role that Israel should play to promote peace and stability.

At the meeting with Ambassador Stefano Moscatelli, President Isaias noted that Italy has not played, in recent years, its due role in its former colonies.  Eritrea expects to see a more robust stance by Italy on regional issues and bilateral affairs, President Isaias emphasized.

President Isaias and the new French Ambassador exchanged views on the prospects of restoration of an independent and more effective French foreign policy in the aftermath of the forthcoming elections.

At the meeting with Ambassador Abdalla Al-Seri, President Isaias discussed in greater detail the multi-faceted efforts that must be exerted to bring about lasting peace and stability in Yemen and our region in general.