Higher Education and Nation-building in Eritrea 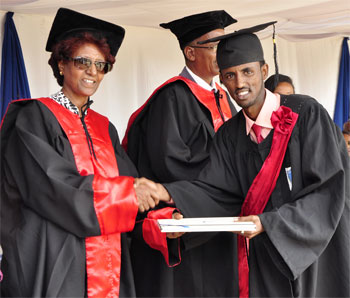 Throughout history, institutions of higher education have played a fundamental role in societal transformation. Behind every successfully accomplished social transformation and nation-building process there are universities, colleges, and institutions of higher learner. Higher education may impose short-term costs, but it is often a sound investment. College education eliminates the old and stagnant ideas, and provides new ones – vitally important for development and progress. Higher education is one of the best instruments of nation building since it offers highly-skilled labour and refined ideas and thoughts.

More importantly, one of the great ends of higher education is to discipline and train citizens and help them to fulfill their own potential. The success of country’s development project lies in the knowledge and character of its citizens.

Colleges are places where the mind of the youth is polished and hopes of the society refreshed. College education is not only about accumulation of knowledge, but also preparation of the workforce to contribute. College education and nation construction are two sides of the same coin. After independence, the educational reconstruction process in Eritrea gained top priority and recorded radical changes at all levels. The position of the Eritrean government toward education outlines: “the priority based political will of Eritrea to build manpower resource ingrained with discipline and literacy skill is unique in the rest of the African continent” (Rena 2008: 5). This expression relates to the Chinese proverb: “If you are thinking one year ahead, sow seeds. If you are thinking ten years ahead, plant a tree. If you are thinking 100 years ahead, educate the people.” Eritrea has focused on the education of its people, which is a vital element in the process of rebuilding its shattered social and economic infrastructure and to have a better future. Education is said to be the “hallmark of Eritrea’s economic growth and poverty reduction strategy.”

Without education we all would lose direction in life and life would become empty and void. The belief of the government of Eritrea reflects the Tigrigna proverb: “a smooth grindstone cannot grind, and an uneducated man cannot defend.” The overall vision of Eritrea’s future progress is ultimately based on the formation of human capital. The government firmly believes that the country’s future aims and hopes lay with an educated and motivated youth.

Institutions of higher education are places where mind and heart are simultaneously refined. Educating the student without disciplining them is not cultivation; rather, it is destruction. Therefore, colleges are expected to shape the behavior of youth and create confidence in them alongside equipping them with necessary knowledge and skill. Colleges work to develop important professionals, including researchers, diplomats, technicians, managers, scientists, engineers, doctors, lawyers, teachers, administrators, journalists and writers, thinkers who participate in development, and more. Institutions of higher education are one of the most important national assets in addressing many of the present and future problems of Eritrea. They are sources of new knowledge and innovation, providers of a skilled workforce to the network of national labour and agents of social justice and transformation.

In 1991, the University of Asmara was the only institution of higher education in the country. It was established by Italian missionaries at the end of 1950s. Under the colonial administration, educational opportunities for Eritreans were very limited, and largely focused on promoting colonial objectives. The University of Asmara had a limited intake capacity, enrolling no more than 1200 students per year (NBHE 2013: 1). The extensive access to primary and secondary education made by the government requires concurrent expansion in higher education. Pragmatic decisions were taken to expand higher education to cope with the increasing number of students and national demand. To address theses issues, the government decided to expand tertiary education in different regions of the country. As a result, seven institutions of higher education were established across different parts of Eritrea. Eritrea started to harvest its fruit of educated graduate youth that were expected to shoulder the responsibility of building the nation.

Eritrean youth that once played a vital role in making and defending the nation, were now regarded as reliable pillars for continuity and development. Eritrean youth during the

colonial period courageously struggled for 30 years to attain freedom. After independence, the Sawa generation played a significant role defending Eritrea against Ethiopian invasion and aggression during 1998-2000, and also in reconstructing the country. The new policy initiative aimed at the expansion of higher education has also focused on providing opportunities for youth who missed formal higher education.

The importance of education as a tool in nation-building and as a human right to which every Eritrean is permitted is spelled out in many national documents and directives. For example, the National Charter of Eritrea states that, Education is the foundation of development. To provide equal educational opportunity means to provide equal opportunity for development. We must widely expand education so that our people can be free from ignorance, acquire knowledge and skills through various means, and enhance their productive capacity to build their country. Education is a fundamental right to which every Eritrean is entitled (National Charter of Eritrea 1994: 24)

Article 21 (1) of the ratified Constitution of Eritrea stipulates that: “every citizen shall have the right of equal access to publicly funded social services. The state shall endeavor, within the limits of its resources, to make available to all citizens health, education, cultural and other social services.” The human element holds an essential position in the development strategies of Eritrea, and the expansion of educational opportunities and access for all citizens is a positive step toward national unity and national development.

Eritrean institutions of higher education have shown considerable progress and achievements in a relatively short period of time. They help provide the high-level skills necessary for national development projects; for example, they produce many teachers, doctors, nurses, civil servants, engineers, social scientists, and other personnel who play key roles across many sectors.

Skilled human resources and sufficient knowledge are two of the most important factors in nation-building. Economic prosperity, social integrity and political stability are achieved only with a trained and educated population. Colleges are not only places of knowledge accumulation but also of application. One of the roles of higher education is to prepare the knowledge, ideas and technology that the present as well as the future generation may need. Institutions of higher education with their students who acquire creative thinking are vital components for nation-building. With all their challenges, Eritrean colleges are creating conducive and supportive environment where the nation can grow and prosper.

Eritrean colleges are home to the youth who are actively responding to present and future national demands.

Call for Judicious Use of Water Resources