“Delivering as One for SDGs” 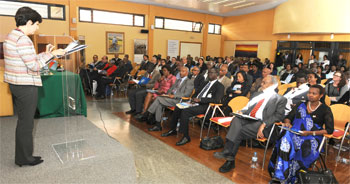 Working in partnership for the benefit of the people is the motto of the ongoing work between the United Nations and the Government of Eritrea since independence. Partnering for development and ensuring that “no one is left behind” were words repeated throughout the celebration of the UN Day this past Thursday, the 1st December, at the premises of the National Confederation of Eritrean Workers (NCEW) in Asmara.

Commemorating the 71 years anniversary of the UN came in line with World AIDS Day and gave the occasion to remind people of the important role of all stakeholders in continuing working for the elimination of the epidemic disease. As such, Eritrea is a leading example by achieving its health related MDG number 6 on HIV/AIDS prevalence with a registered rate at 0.78% in Eritrea, Ms. Christine N. Umutoni, the UN Resident and Humanitarian/ Coordinator in Eritrea, stressed in her opening speech. In remembrance of the day, banners as well as the red ribbon were distributed to the public present for the occasion. The hall was also decorated with different banners representing all UN agencies operational in Eritrea. All development partners as well as Government officials, the PFDJ, Members of the Diplomatic Corps, as well as the press took part in this important gathering.

The official ceremony on the occasion of UN Day put a strong focus on the transition the world is in terms of continuous instability, conflicts, enduring poverty, unemployment, climate change and growing inequalities as stressed in Ban-Ki Moon speech read by Ms. Umutoni.

UN Day, this year, also came at a critical juncture with the end of the era of the Millennium Development Goals (MDGs) and the birth of the new development strategy, the 2030 Sustainable Development Goals (SDGs), as well as the African Union Agenda 2063, putting under the spotlight important issues anchored within the 17 SDGs with one slogan: “Delivering as One for SDGs”.

UN Day and World AIDS Day were not the sole reason of such event in Asmara but to officially launch the new 2017-2021 Strategic Partnership Cooperation Framework (SPCF) between the Government of Eritrea and the United Nations.

As the previous SPCF, covering the period 2013-2016, is coming to an end, the UN in Eritrea under the lead of the Ministry of National Development started working on a new framework for over a year. After review by both the Government and the UN, the new SPCF was signed on the 2nd of September this year. Without a doubt, the renewed commitment of both parties goes in line with national development priorities underlined within the 2014-2018 National Indicative Development Plan (NIDP).

For the occasion, Ms. Leila Gharagozloo-Pakkala, UN Children Fund (UNICEF) Regional Director for Eastern and Southern Africa and Focal Point for Eritrea, also extended her appreciation of the ongoing work and the renewed partnership framework in which she highlighted that “as with its predecessor, the new SPCF will be guided by key core values of accountability, integrity, professionalism and mutual respect”. Her words were seconded by Finance Minister Berhane Habtemariam in his keynote speech on behalf of the Ministry of Foreign Affairs, in which he expressed that, “the Government of Eritrea has successfully collaborated with the UN on MDGs and the SPCF 2013- 2016 with significant results based on mutual understanding, respect and benefit”.

Looking at previous partnership, the new SPCF is the fourth one since Eritrea’s independence starting from a focus on national reconstruction towards sustainable development today. Accordingly, the previous SPCF emphasized on (1) ensuring basic social services; (2) developing national capacity; (3) promoting food security and sustainable livelihoods; (4) support environmental sustainability; and (5) fostering gender equity and the advancement of women.

This framework was implemented through a people-centered approach. Having a strong ability to mobilize and motivate local communities was one of the key tool for the success of previous project implementation in the country. Indeed, during the interview conducted with Ms. Umutoni, she explained how every project such as micro-dam or dam construction or vaccines campaign were 100% completed under the required time thanks to the strong commitment and participation of local communities. Surely, this people-centered sort of development has been key in all endeavors by including all layers of society create a sense of ownership.

During the official launch, panelists gave their brief overview of the work ahead to achieve the goals anchored within the new SPCF. Mr. Afewerki Tesfai, from the Ministry of National Development, opened the panel discussion by looking at the cooperation framework from the government’s perspective. He enhanced the presence of a devoted partnership, which both parties work tirelessly towards the whole process for the success of the new SPCF. He further stressed the Government’s commitment to facilitate and work in partnership.

Mr. Ibrahim Sambuli, Representative of UN Population Fund (UNFPA), also gave a brief introduction on SPCF and he looks at key aspects for better development results and to achieve SDGs. The UN in Eritrea is an example of good cooperation with the Government of Eritrea and that to help in the success of the new strategic framework; it is important to continue strengthening coordination and management between UN agencies and national partners and having a cooperative and collaborative UN on the ground through five important aspects at the country level: (1) program, (2) common budget, (3) leadership, (4) communicating and (5) operating. He concluded that it is important to ensure that this new SPCF is about delivering as one together with the communities, having close collaboration and implementation of these instruments. Eritrea as good example of collaboration. Comes at strategic period in terms of new global development goals and ensure that no Eritrean is left behind.

Whereas Ms. Pelucy Ntambirweki, Deputy Representative of UNICEF, gave extensive presentation on behalf of the UN family, by highlighting the key lessons learned and the strategic steps taken in coming to agreement as well as the roadmap for the success of 2017-2021 SPCF. In regards to the lessons learned, she highlighted the government’s sense of ownership in achieving the previous agenda as well as a clear national vision and policies in achieving sustainable development. Without a doubt, challenges remain in terms of data collection, the lack of updated data available as well as the importance in monitoring and ensuring clear communication.

The new Strategic Partnership Cooperation Framework will surely continue the work undergone already by continuing this community-led approach and an emphasis on South-South and Triangular Cooperation, to encourage the sharing of knowledge, skills and expertise as well as the adaptation of good practices. With the motto of a sustainable resilient development that leaves no one behind; the new SPCF is divided into four pillars requiring the indicative resources for the implementation estimated at USD 328,724,188 which is an increase of about 75% from the previous 2013-2016 SPCF of USD 188 million. The four pillars are divided between, (1) basic social services; (2) Environment sustainability, resilience and disaster risk management; (3) Public sector capacity development and; (4) Inclusive growth, food security and sustainable livelihoods. The first pillar focuses on health and nutrition; water, sanitation and hygiene and basic education amounting for 28% of the required resources. The second pillar will look at environmental and natural resources management being gender responsive and sustainable, climate change among others amounting for 29% of the budget. The third pillar, about 7% of the resources, will look at capacity development aiming at ensuring that by 2021 the people including vulnerable groups, benefit from evidence-based planning and policy, accountable public institutions and system which ensure human rights and equal delivery of public service. The fourth pillar, on its side, will concentrate on food security and livelihoods by ensuring access to quality food and enhance livelihood opportunities; gender and youth empowerment in economic, social and political aspect; and social protection.

Certainly, the launch of the new Strategic Partnership Cooperation Framework 2017- 2021 is putting the level higher in achieving the national development plans as well as achieving the 2030 SDGs and the 2063 African Union Agenda. Throughout the years, the cooperation between the UN Country team and Eritrea’s government bodies as well as civil societies has shown great progress and mutual engagement in improving the development situation of the country. What the slogan “Delivering as One for SDGs” reflect is the Teamwork by all stakeholders with one key tool, engagement of local communities at all steps of development for positive achievement. The UN Day was thus special this year with its focus on the next four years plan as well as the reiterating of engagement by both the UN and Eritrea in improving the lives of the people and working in hands in all aspects of development such as human rights under the UPR recommendations, access to basic needs and youth and gender empowerment.