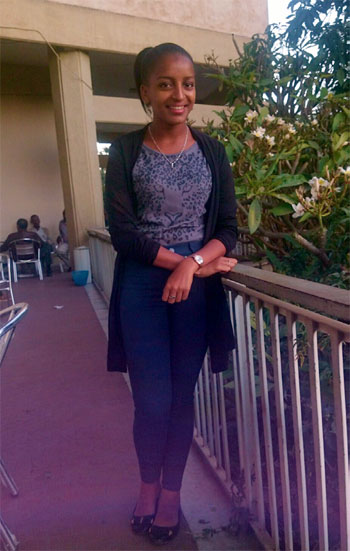 Okay, my name is Rigat Tesfamichael and I graduated from the College of Arts and Social Sciences (CASS) in Adi Keyh majoring in Political Sciences and International Relations. I did my community service in Sawa for two years and then I was teaching political education in Sawa. Currently, I am working at the National Union of Eritrean Women.

I was always keen in gender related issues. I would not call it feminism, per say, but I always had an interest on women’s issue. At one time in my life, I wanted to study law and be a lawyer so that I can fight for women’s rights.

It all started during my stay in Sawa, when along female teachers’ colleagues, we decided to create a volunteer group; we created a small group in order to give young female students in Sawa an opportunity to discuss about the challenges they face. At a time we were students there too, so we know the hardship girls might encounter especially at the beginning. Sawa is a place of personal development but before changes set to be stepping stones; they might be challenges, you know, starting from the weather and adapting yourself and being away from parents.

Through this volunteer group we opened a platform for the sharing of ideas and experiences. We did also start to organize several activities, seminars and panel discussions on topics such as how to make social adjustment, time management, boasting self-esteem and so on.

Undeniably, Sawa could be a harbor of empowerment, and I noticed that when female teachers and students came together and gathered in the group that I am talking about. We developed solidarity amongst us it was beautiful how we all generated ideas. The Warsay Yikealo School was very supportive and, even to this day, the group is still going on, every female teacher kept the tradition. Every new generation of teachers do this and, us from the headquarters, have great relationship with them.

What we call 7th Zoba is a department of NUEW, it is a hypothetical region. It was established after the 7th association’s congress and my assignment there aimed at institutions of higher education. So our duties focus on colleges in different regions where we discuss matters and issues that are of concern to young ladies enrolled in colleges.

I mainly travel to colleges and we talk about many things. We talk about means and ways to empower women. We have counseling. In fact, 38% of students in the Eritrean Colleges are women. Within the College of Marine Sciences, which I just returned from, the gender ratio shows that more than 40% of students are women and in CASS is about 50%! This clearly shows that there is progress in the educational field.

Yes, it’s all part of the 16 days of activism against violence and we’re campaigning against discrimination against women. It is an international UN campaign. Well, younger girls, especially the employed ones and those in colleges are with better benefits essentially because they are educated, and so we inspire them to be agents of changes when they go out of college and join the professional world. We give trainings on gender, rights and policies regarding genders within the Eritrean laws and regulations, leadership trainings, women health awareness and more.

The fact that many dangerous practices have been eradicated such as that of Female Genital Mutilation (FGM) is a milestone in our history. Women have now started to work, and families are willing to send their daughters to school.

When we talk about societal evolutions; we talk about changes that need a lot of time, what the people and government are jointly doing is actually an effort to accelerate its progress. The NUEW goes all the way to grassroots level in its endeavors as the union has agents even at village’s level.

Generally good steps have been done and we have been rejoicing great outcomes but we still have challenges to face in several attitudes degrading women, additionally we need to ensure our changes are sustainable.

Back in Sahel, female freedom fighters’ life trajectory was fighting and sacrificing equally for a common cause, now that they are back home, though, they have duties and requirements that they need to fulfill, and also expectations that they need to live up to as wives and mothers that society would not condemn.

All in all, with all due respect, they did prompt tremendous changes but now it’s our turn to assist what they initiated. After all, we are talking about a generational fight. Young women, we need to come together and live up to the expectations of our mothers.

Attitudes, it’s all about attitudes. Sometimes the way media projects women is belittling, as if all that matter is beauty and it should get all the investment. In fact, its part and parcel of impact of globalization; we are directed in believing that there are identical templates on which girls are forced to believe they should base their outer looks on.

Nonetheless, what we need is empowering young women who rather invest on their education and knowledge rather than their looks. We need strong ladies with an incredible internal integrity.

Education, independence and professionalism are constituents that we should raise almost every day in our local media. If a girl invests in looking good and luckily get a rich man, then there goes hardly, our neo challenge in a reformed way! We need young girls that believe in themselves.

This is actually a global stereotype that we need to fight in order to secure our rightful places in our jobs and everywhere we go. So it’s important to shape our young girls’ dreams.

The rights of women are abused even in the most developed country so it is a very timely and global issue.

Yes of course, especially at a regional level. Peace and stability are major factors in safeguarding women’s rights, and we have it in abundance. For example we face no threats of sexual assaults. And in actuality that was a reality in our country of not long ago; during the Ethiopian offensive we did see some cases, our girls where being raped by Ethiopian soldiers, and the rate was only higher before independence.

Peace, stability and the government’s and people’s attention towards empowering women is not anything to be taken lightly at all. And to just make things better we have gender mainstreaming, gender policies and microcredit programs are just few of the many things that are outlined and implemented to assist women even in the remotest areas of the country. Henceforth, we’re definitely better off but let’s work even harder to keep up what we have!

Homage to the Saints and Motive for Social Gathering