A Conversation with Engineer Merhatensaie Gebremariam 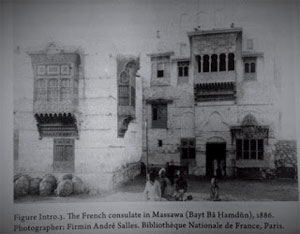 The presentation that I did in one of the sessions at the International Conference on Eritrean Studies held last July was entitled “Massawa’s Reconstruction after the 1921 Devastating Earthquake: Planning, Test of Authenticity and Lessons to Future Restorative Efforts in Eritrea.” By Massawa, I mean the island including the Port and Ras Mudur which is 1 mile in length by half a mile in width, and which is linked to Taulud by a causeway. My interest in the research was in the main to prove whether Massawa’s reconstruction after the earthquake could fulfill what is today popularly called test of authenticity in heritage conservation circles. That is to say, whether Massawa can be said to possess a truly Ottoman or Egyptian heritage after having undergone almost a total reconstruction following the 1921 earthquake. This is vitally important for it has to do with Massawa’s future potential for inscription as a world heritage site. To throw some light on the planning and reconstruction following the devastation by the earthquake: the Italian colonial government of the time quickly issued a proclamation (in December 1921) that included a new master plan and urban regulation for Massawa. This was in clear contrast to the historical town plan that evolved since the Ottoman period. The new master plan intended to raze to the ground the entire stock of buildings and start the town anew configured in an orthogonal town plan, unlike the hitherto existing predominantly radial plan of the town. It was also proposed to build wide streets in place of the narrow streets well-suited to a coastal area like Massawa which help channel cool breeze from the sea besides providing shade. It is here that local wisdom stepped in and saved the town from irreversible loss of its historical form and also saved the Italians from an historical error. Of course two things made a contribution here. One was that due to delay in funding the colonial government did not embark on the initially proposed totally new construction of the town. The other thing was the local community, particularly the notables, who founded a union of their own called “Union of Proprietors who’s Houses were damaged by the Earthquake in Massawa”. It was this society from the local populace which battled with the Italian authorities to retain the unique character of the town in terms of its building style and town plan.

In terms of history of housing, Massawa’s houses were built of stick and straw before they evolved into a settlement of permanent structures. The stick and straw construction is suitable for living, given the local climate. This type of construction was still widespread until the end of the Ottoman rule as has been chronicled by travelers. However for permanent houses in Massawa, the building material of choice is coral limestone which is abundant in Massawa and in the islands nearby such as Dahlak and Nakura. In fact Massawa and Taulud sit on coral rocks. Besides its availability, other advantages of coral include its low conductivity of heat that is its good insulation; being light and soft it can be cut into different shapes and provides ease of construction. However, generally while stone is a good material to carry vertical loads, it is susceptible to bending and shear stresses triggered by lateral movement such as earthquakes. That is why, the need for reinforcing, tying building elements to one another and retrofitting of stone structures. The first permanent stone structures in Massawa sprang up at the beginning of the Ottoman period (the Ottoman occupation was in 1557).

Those structures were built around the present day port area on the eastern side of the island. They were a governor’s palace and a funerary mosque. Another important architectural feature of construction in Massawa is the elaborate wooden screens called Mashrabiyas which adorn balconies in the town regulating wind and the sun while providing privacy. These wooden structures are also evident in other historical coastal towns on both sides of the Red Sea.

As I have mentioned in one of my previous answers, the local initiative known by the long appellation “Union of Proprietors whose Houses were damaged by the Earthquake in Massawa” was instrumental in articulating the local thinking for the reconstruction of Massawa. They argued that in terms of town plan what Massawa needed was not wide streets which would expose them to the sun’s radiation in an area known for its uninviting heat and humidity. In their view, what Massawa needed was shade. The Italian designer Paolo Reviglio who was at the time one of the engineers at the forefront of the reconstruction encapsulated the local argument in the following statement, “‘Ma noi, qui a Massaua, non abbiamo bisogno di sole, ma di ombra’ (to mean ‘We in Massawa need shade and not the sun’). He also added that the local representatives persuaded the engineering professionals to look at the whole issue in terms of the climate of the area. That was why Massawa was reconstructed for the most part using the traditional coral limestone interspersed with concrete strings to safeguard against possible earthquake in later times. The active participation (rather partnership) by the local people proved decisive and the Italian authorities in August 1922 revoked their previous proclamation of December 1921, finally coming up with a new set of proclamation settling to a large extent on the old urban form and construction techniques. In the actual reconstruction, local craftsmen came in handy whom Reviglio names the unsung heroes.

The Fast and the Noisy