The Fast and the Noisy 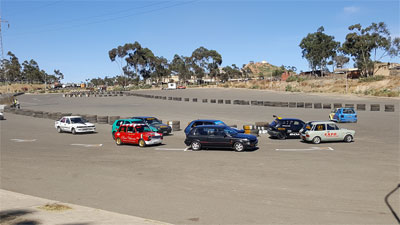 It’s Sunday morning in the out streets of Beit Gergish, just out of Asmara. Sitting behind the wheel of small import cars with engines revving are five young men & one woman staring each other down. Their feet poised over the gas pedals, they anxiously await the checkered flag to set them off to the abyss of speed racing. When the flag waves, the car is dropped into gear, the pedal is slammed to the floor and the cars are quickly off, screeching their tires and sending up clouds of dust.

Sunday can be quite an eventful day in Asmara. In the early morning’s the religious faithful are seen heading to the church or mosque, while the sport faithful are off to the heartbeat of Asmara; down town Harnet Avenue or Enda Mariam to watch a scheduled bicycle racing. In the afternoon, women head to relatives, while men flock to stadium Asmara to watch a good game of football between local teams, if not, the cinema is filled with young and old men watching the English premier league or The Spanish laliga on big screens.

This past Sunday though, a different event in the form of a car race occupied the schedule of young and old Asmarino’s. Eritrea’s car race history is as old as the country’s two favorite sports, bicycling and football.

As every Asmarino flocked to Beit Gergish to watch the highly anticipated race, the temporary venue was packed. The fresh cool breeze of the winter season added quite scenery.
Motorsport fans in thousands made their way to Beit Gergish for the highlight of the race, a day full of competitive racing, glamour and, of course, petrol. With space on the side of ‘The Hill’ beside the hallowed track a premium, early-bird punters assembled their deck chairs in prime viewing position.

This was not an ordinary race; the kind of race Eritreans had become accustomed to over the years, the Circito Asmara was abandoned and traded for what I have come to know later a kind of race called the Gymkhana.

Gymkhana is a type of motorsport, known as Motorkhana in Australia and New Zealand, and Auto testing in the United Kingdom and Ireland. Similar to autocross, the goal of gymkhana is to achieve the fastest time possible; memorizing the course is a significant part of achieving a fast time.

Gymkhana events are time and/or speed events in an automobile. These can feature obstacles such as cones, tires, and barrels. The driver must maneuver through a predetermined “track” performing many different driving techniques. What separates gymkhana from traditional autocross events is that the gymkhana requires drivers to perform reversals, 180 degree spins, 360 degree spins, parking boxes, figure 8s, and other advanced skills. Drifting is also encouraged where helpful or necessary. Essentially, a gymkhana is any event featuring a starting point, a finish line and some sort of “obstacle” to get through, around, or by, all within a certain time limit.

The circuit that was built in Beit Gergish, was for the purposes of speed racing, thus the circuit did not include traditional obstacles such as figure 8s or parking boxes. The circuit which was 1.5 k/m long included four tight turns which was enough to put the supposedly skilled racers to the test. The driver’s goal is to get through the course as quickly as possible with the fewest number of mistakes. Acceleration, braking, drifting, and grip driving are all necessary. Not only is the driver required to hold control over the car, but also gymkhana demands strong mental concentration and memorization.

The rich history of car racing here is, in 1930’s Italians in Asmara organized an automobile club and started running competitions, one of the first of which was the 26 Kms Nefasit to Asmara Hill climb for the “Coppa del Governatore dell’Eritrea” on 23 May 1937. I am sure that there was more competition after that but the next major event was held on Christmas Day 1938 race called Coppa di Natale which attracted two Alfa Romeos from Italy as well as lots of locals. There were two races for cars up to, and over, 1.5 litres. The former was won by a 4CS Maserati, whilst Romano’s Alfa Romeo 8C2300 Monza won the main event. There were no fewer than fourteen 6C1750 Alfa entered in the race for larger capacity cars so it is not surprising that an Alfa Romeo agency was opened in Asmara.

The race was done on the streets of Asmara, with the start in front of the Asmara Opera: it was long nearly 2865 meters on each side of the “Viale Milano” and “Viale Roma” (now called “Sematat Avenue”) and lasted 40 laps (in Italian called “Giri”) for a total of 108 km.

The second “Circuito Asmara” was to be done on December 1939, but the beginning of World War II hindered it. Only in 1948 was the second race held and was won by Salvatore Ettori on Maserati.

After the end of the war the circuit was held in 1950, 1951 and 1952, but was only for local people. The fifth done in 1952 was followed by huge crowds. Later it was held with continuous interruptions until 1969, with the “Coppa SM Haile Selassie” The last that was done in 1972 (which was called “Gran Premio Automobilistico Expo’72”) with the presence of the then Emperor Haile Selassie.

Back to the present race; one racer lays out his rules of the road: “Know your area…if you don’t know the road or the area, you are asking for big trouble. And, use common sense. Think before you go, and if you don’t think it’s safe, it’s probably not.”

A typical racer is a male over 22 and most likely driving an import. Honda Civics and Fiat have been cars of choice because of their size and handling. The money being spent to sup up, remodel and refit these machines generally starts in the thousands.

The race which started with the 1000cc, saw a young woman in a midst of five men, in her Fiat 127 courageously putting the men into their pace. The eight lap race ended with Michael Estifanos in his Lancia first to cross the finishing line. The race which continued with the 1300cc, 1600cc as well as 1800cc respectively saw the likes of Thomas Yakob, Robel Measho, & Leonardo Modici win their respective categories.

In the 175cc motor bike category, in a race which bore more noise than power, Biniam Mehari virtually won the event uncontested throughout the race. The comical skills harnessed by the racers across each tight turn, humored funs in the hillside.

The last event of the day, the 2000cc category was the most highly contested and engaging. As the saying goes straight roads are for fast cars, turns are for fast drivers, the race proved to be exactly that. The event saw a tightly contested race between the experienced Mulgieta Kidane and the beginner Matiwos Sbhatu. For the majority of the race Mulgieta Kidane kept Matiwos at bay, it was impossible, as the big sun hit the race track, to understand all the influences raging in the minds of the two protagonists.What I can say is that the fiercest race of the day was building up to its hype. This was very much a private duel with over 5,000 fans watching in pure enticement.

With two laps left in the race, Matiwos Sbhatu, who in the third tight turn of the track decided to try and overtake Mulgieta in the inside turn rather that in the outside, which he was trying to do throughout the first 22 laps of the game, his decision to change tactics was to be successful as Mulgieta was anticipating his contenders move to be in the outside, Matiwos somehow managed to squeeze his Golf GTI in the inside turn past Mulgieta’s Toyota corolla, the crowd erupted in cheers of amusement and approval of the young racer. Matiwos was now in the lead with two laps left and all he had to do was hold off Mulgieta, and that he did.

As he crossed the finish line, the up and coming racer, drifted and reverse parked his Black Golf GTI and emerged out of his car in his red race suit and gracefully bowed to the fans over the hill. What a way to cap off a day that called for the fast and the furious, the need for speed and license to drive.

A Conversation with Engineer Merhatensaie Gebremariam