The Real Eritrea is not what you Read on the internet 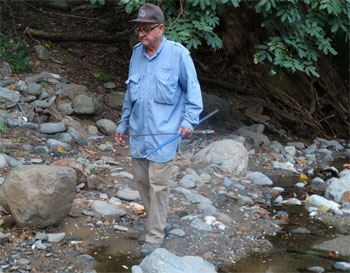 I have now been in Eritrea for the second time. I will be leaving in a few days and I want to document the highlights of my visit so that readers around the world will understand that I have had a scientifically productive trip in a safe and friendly country. When you read in the internet, you will see many misconceptions, but I would urge all foreigners to come to Eritrea and “see for yourself”. Such internet accounts are not true.

This is my second visit to Eritrea. After my first trip, I told many people at the University of California that I planned to return. One student said to me “I don’t know where Eritrea is but I know that it is very dangerous”, and she advised me saying “you need to be careful”. Certainly once I am back, I will make sure that she reads this report.

First of all, I should say the success of this trip has been due to the help of many people, both officials and local residents in each of the Zobas and Sub-Zobas (Zones and Sub-Zones) that I have visited. I have traveled in different parts of the country. I want to thank my hosts, the Minister of Agriculture Arefaine Berhe, the General Manager of the Forest and Wildlife Authority, Abraha Garza, and Futsum Hagos, the Director of Wildlife for the State of Eritrea. Their arrangements throughout the country made my collaborative and successful research easy.

The very next day after my arrival, I was invited to a wedding celebration together with my col-league Futsum Hagos. I spent a very pleasant afternoon with about 1000 relatives and neighbors of the couple. There was a live band and many of the guests were dancing in the open area between the tables. The celebration was held in a huge tent. We sat around tables in groups of eight and en-joyed Siwa and Injera that was provided by relatives and neighbors of the couple. Even though I was a stranger due to this being the first time in my life to attend an event like this, I was welcomed by the many people who greeted me. This first welcome was repeated many times during my travels around Eritrea throughout my stay.

Two days after my arrival I went to Futsum’s office to plan our research together for the next days. While we were in the office two young college students from the College of E.I.T. came to the office seeking helm. The two women, Hosaena and Miriam, were working on a research project to study the effects of plant extracts on treating bites of a venomous snake species that is found in Gash Barka Zoba. They had a photograph of the snake, which I identified as a Saw Scaled Viper (Echis pyramidium). They had obtained a venom sample from a snake and they planned to test ex-tracts from a plant that local people used to treat bits from snake. I was impressed with the enthusi-asm of these young students. It is fortunate that Eritrean students are encouraged to conduct original research even as undergraduate students.

A few days after the wedding celebration, I traveled to the village of Mekerka to look for lizards and frogs in a rocky area near a dam at the edge of the village. We saw many lizards and one frog. At the end of the day, before returning to Asmara, we stopped at a small café to drink tea. As we were leaving the café, a farmer came up to our car and gave me a large pumpkin. The man had never met me, but he told me that since I was a guest in his village, he wanted me to have the pumpkin as a gift. He said that his harvest should be shared and that he would be blessed for giving away some of his pumpkins. I had a similar experience at Segeneiti during my first visit when a farmer gave us three large cabbages. As we drove away, my guides from the Ministry of Agriculture told me that such generosity was part of Eritrean culture.

A few evenings later, we went to a wetland area near Asmara to look for gecko lizards and Asmara Toads, a species that I wrote about on my previous visit. A farmer saw us walking around with lights and he asks us why we are in his farm. We said that we are looking for frogs and lizards. He told us there were many lizards in his storage shed. He took us to his shed and we found several gecko lizards. I tried to offer him money for helping us, but he refused payment because he told me I am his guest.

On our next trip we went to Mendefera to survey for amphibians and reptiles. A local expert from the Ministry of Agriculture took us to wetland area near the town. We met a farmer who told us there were turtles in the reservoir next to his farm. This was very exciting because I suspected that he was talking about the endemic Eritrea Side-neck Turtle, species that was discovered in Eritrea in 1834 in Ghinda. We set traps baited with sardines in the reservoir and set under a tree in the shade. Soon the farmer appeared with a tray of Kicha (a type of unleavened bread) and honey that he had harvested from bee hives on his farm. What a wonderful way to spend a couple of hours. In the late afternoon we pulled in the traps and confirmed a new site for this turtle species. The Eritrea Side-neck Turtle is found nowhere in the world except Eritrea. It should be considered a National Treasure as part of Eritrea’s great biodiversity.

Next we went to the Keren area for three days. A local expert from the Ministry of Agriculture took us to the Halhale Agriculture Research Station at Eden. Lizards are abundant in this area and we saw many Doria’s Agama Lizard, a species first described from Keren in 1885. The Station has preserved large area of natural habitat around the seven reservoirs. We were told that even large African Pythons up to four meters long live the forest here. For breakfast at Eden Village we ordered Frittata (scrambled eggs with onions, tomatoes, and peppers). After the meal the owner offered us a coffee ceremony. After the ceremony she asked us to only pay for the frittata and not the coffee because we are her guests. This is another example of the daily hospitality that I experience in Eritrea. I have had no such experiences in my life, although I have traveled in many different parts of the world.

As we drove back from Keren, I notice thousands of terraces that have been built to prevent erosion. The land between the walls is planted with young trees. I am told by my hosts from Wildlife conservation that since the armed struggle for independence there has been a national effort of “Greening” to restore the original forests of Eritrea. High School students volunteer for part of the summer vacation to plant trees and construct terraces. Individual families “adopt” young seedlings to make sure that they thrive and are not eaten by goats or sheep. According to Futsum’s information, these endeavourers gained momentum in 2006 that is after the launching of the Greening campaign.

For the next trip, we left Asmara and drove to the Green Belt Protected Area. The rich biodiversity of this tropical forest includes mammal species such as Vervet Monkey, Baboon, Warthog, Leopard Klipspringer, and Greater Kudu. I learned from my host that in recent studies, it was documented over 100 species of birds in this forest. We spent two nights at the Medhanit Park, a very quiet place to rest where the only sounds are calls of birds in the trees around the hotel. Excellent meals of injera and pasta were prepared there. On the last evening after we returned from a search for frogs and toads along Fil-Fil River, we were treated to a coffee ceremony. Earlier in the day, the leader of the rangers who protect the Protected Area invited us to lunch. He slaughtered a goat in our honor and we ate huge amounts of injera and the largest and sweetest oranges I have ever tasted. A most pleasant way to spend a hot afternoon in the shade of the guard compound. After lunch, I thanked the commander and his answer was “It is our custom, you are a guest”.

This comment is something that I hear all over Eritrea. Wherever I meet new people, I am immediately considered a guest. I would say that this is a unique custom that can only be found in Eritrea.

Our final wildlife survey was a trip to the Red Sea Coast between Massawa and Foro. We spent several nights at the Gurgusum Hotel on the beach a few kilometers north of Massawa. We find that a unique species of lizard, the Shield-backed Lizard that was described from Keren in 1874 is common on the grounds of the hotel. I know that the hotel has system of preserving habitat with planted gardens at the hotel. Large numbers of birds live on the property. We went to Foro, 50 ki-lometers south of Massawa. This small town is where a species of toad, the Blanford Toad, was discovered in 1868. The toads are still common here, yet another example of habitat preservation and respect for wildlife, a policy that is universal in Eritrea supported by all citizens.

Last but not least, a few days ago, I was privileged to attend one of the largest cultural event of Asmara that is the Saint Mary fest (Ngdet) and it was a very memorable event. As I prepare to leave Eritrea, I am going to miss the friendly generous people who make Eritrea my favorite African country of the 26 countries in Africa where I have studied animal diversity over the last 40 years.

But I am already discussing with Futsum Hagos and the staff of the Ministry of Agriculture plans for a return to Eritrea and work on more findings about the biodiversity of the country.

Again I repeat, “Don’t believe what you read on the internet, come see for yourself”.