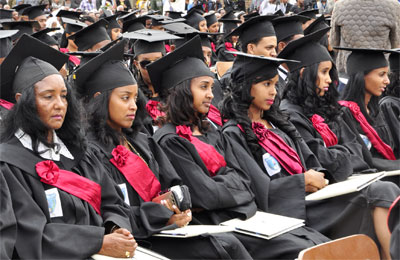 Women are the backbones of communities, the weavers of solidarity, and the architects of love. Instead of becoming discouraged by all the challenges they face, women are fighters for rights that others enjoy from birth – the right to live in a family, to live without discrimination, to live in dignity, and to have access to education, healthcare and employment. There is a growing belief that the fastest way to change and develop a society is to mobilize women. A woman with a voice is an effective path toward progress.

The right to education for all, particularly women, has been an international goal for decades. Education has also consistently been shown to be a tool to women’s empowerment and overall socio-economic transformation. Several momentous conferences have placed the issue of women at the center of discussion. Governments also pursue moderate policies promising generous outcomes to women. The main problem, however, is the inaction of governments to implement these recommendations and national policies.

The government of Eritrea has shown considerable dedication toward the provision of equality and opportunity for all citizens and ensuring full integration of women into the development process. Women, particularly, are engines for development. Therefore governments must formulate and implement policies that remove constraints that inhibit citizens from realizing their potential. Otherwise rhetoric and policies lacking practicality are simply instances of hypocrisy.

Education is one of the best ways we can change and empower ourselves. Eritrea has achieved significant progress in expanding education and opening the doors and opportunities to all. Article 21 of the Draft Constitution of Eritrea grants every citizen the right to benefit from publicly funded social services such as health and education. Educational programmes and policies play a fundamental role in the social and individual progress, and the national educational policy of Eritrea is based on the fundamental belief that:

“Education in Eritrea is a fundamental human right and a lifelong process by which all individuals are given opportunities to attain their potential as all rounded citizens… Since Eritrea’s greatest asset is its people, revitalizing citizens with relevant education and training is the only means by which the overall socio-economic development of the country can be achieved” (National Education Policy 2003: 4).

Education is a basic human right. It means that no boy and girl, whatever their condition, is to be excluded from school. As a low-income country, Eritrea has increasingly recognized that it cannot modernize without the full participation of Eritrean women (in a similar manner to how independence was impossible without the vital contribution of women). The national education policy recognizes the contribution of women to overall development and puts forward steps to reduce gender disparities at all levels of the education system. For example, the National Education Policy also notes:

“Sustainable socio-economic development cannot be realized without the full participation of women, which comprise half of the part of the population. … and to empower women to their full potential to make them self-reliant citizens and active participants” (National Education Policy 2003: 7).

The State of Eritrea has a remarkable track record on the Millennium Development Goals, agreed to by world leaders at the U.N. Millennium Summit in 2000, which call for universal primary education and for closing the gender gap in secondary and higher education.

Education saves and improves the lives of women. It allows them to have greater control of their lives and provides them with the skills to contribute to their societies. It gives them confidence to make decisions for themselves and to influence their families. One writer defined women’s empowerment as “a process in which women gain control over their own lives by knowing and claiming their rights at all levels of society at the international, local, and household levels.”

There is now a more general acceptance that development, if it is to be meaningful, transformative and sustainable, has to go beyond economics. The social dimension of the society has gained greater currency. The National Charter of Eritrea has made no distinction between equality of women and liberty of the society, pointing out that:

“The issue of women is a major social issue. A society that does not respect the rights and equality of women cannot be truly liberated society … during the years of struggle; big changes occurred for Eritrean women. … They have yet to advance in education and science and take their rightful place in society” (National Charter).

After independence, Eritrean women continued the journey which they started during the revolution under the slogan, “equality through equal participation in work,” to achieve “equality through equal participation in education and national construction.” Educating young girls is education for the next generation. If today’s girls get access to education, they are much more likely to send their own future potential children to school. Therefore women’s education has an intergenerational effect, benefiting both themselves and the coming society.

Eritrean women’s participation in education is now encouraging, although it has not reached the level the country wishes to achieve. Today, the country has achieved a tremendous success in closing the gap in all levels of education. The classrooms of primary and secondary schools are filled with an equal number of male and female students. The participation of women in institutions of higher education has shown remarkable improvement. It is now commonplace in June and July to see Eritrean women decorated by the graduation gown and tassel. As a reflection of women’s increased participation in education, consider enrollment figures from the College of Arts and Social Sciences. In a short space of time, female enrollments have increased dramatically to being nearly equal with males. The trend is mirrored by other institutions throughout the country.

Lucy Lazo describes women’s empowerment as “a process of acquiring, providing, bestowing the resources and the means or enabling the access to a control over such means and resources.” The trajectory of Eritrean women towards the attainment of the resources and means of power is pronounced. The increasing participation of Eritrean women in institutions of higher education is the outcome of the positive policies and baseline investments in education. The future of Eritrean society is likely to be brighter with the increase of women’s enrollment at all levels of education (and particularly at tertiary levels). Increasing participation of women in colleges will improve women’s wages. In turn, when women earn more money, they are more likely to invest it in their children or communities.

Eritrea’s achievements in the area of education and equality are great, yet the government has not been complacent. We have a long way to go to achieve our aspiration. It’s impossible to build a nation worthy of the heavy sacrifices leaving women at home. We must fight against the remnants of reactionary cultural practices and attitudes to gender roles. The heroic participation of Eritrean women in the struggle for independence is now enormously needed in the struggle for development.

“Through Harmony… Strength is delivered” International Day of Persons with Disabilities

The Real Eritrea is not what you Read on the internet