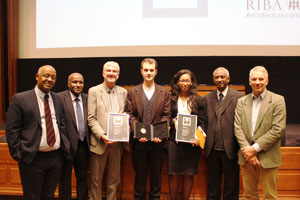 At the opening speech RIBA President Dr. Jane Duncan said that the nominated site Asmara modernist capital city of Eritrea-home to buildings like the Fiat Taliero is not short of extraordinary buildings. Dr. Jean further underlined that Eritrea’s effort to conserve Asmara’s early colonial era architecture represents a profoundly different attitude towards architectural heritage and its interpretation and treatment compared with many other post colonial settings.

For the past 50 years the Riyal Institution British Architecture (RIBA) has been awarding successful projects that reflect changes and innovations in architecture, and that display a commitment to designing and developing buildings and spaces for the improvement and enhancement of people’s lives.

At the awarding ceremony that was held on 6 December in London, Ambassador of Eritrea to the UK and Ireland, Mr. Estifanos Habtemariam and Embassy staff, Ambassador of the UK to Eritrea, Mr. Ian Richards, diplomats and other invited guests were present.

The application to put Asmara in the World Heritage list is expected to be approved in the first half of 2017.