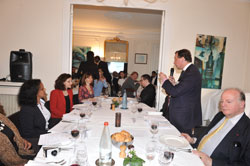 Eritrean nationals residing in France, Austria and Italy conducted different activities aimed at reflecting the true image of their country.

A seminar organized by the Eritrean Embassy in France was conducted aimed at initiating investment and cooperation between Eritrea and France.

At the seminar briefings were provided as regards the ongoing nation building programs, the natural resources, the investment opportunities as well as the true image of Eritrea.

Ms. Hanna Simon also gave extensive briefing as regards the efforts being undertaken to ensure food security, to qualitatively improve the livelihoods of citizens, as well as to encourage investment.

Different people who visited Eritrea shared their experiences and impressions about Eritrea to the seminar participants.

At the meeting in which representatives from 15 Italian cities took part, Mr. Girmai Habtemicael, head of Public and Community Affairs, presented six moths activity report and called for strengthening participation in the national development endeavors.

Ambassador Fesehatsion gave extensive briefing on the achievement registered in the sectors of agriculture, health and education aimed at ensuring food security and social justice.