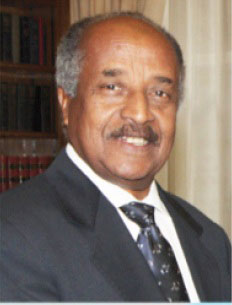 Statement   Delivered  by H.E Minister Osman Salih
Minister  of Foreign  Affairs   of the   State   of Eritrea
On  the   Occasion   of  the   Human    Rights    Day

Statement   Delivered  by H.E Minister Osman Salih
Minister  of Foreign  Affairs   of the   State   of Eritrea
On  the   Occasion   of  the   Human    Rights    Day

The  UN  adopted the Universal  Declaration of Human Rights to set out common standards which every country should strive to achieve.The essence of this is promotion of the   ideals of humanity. Human Rights  Day is thus an opportunity to reflect on the human right situation globally and its implications to Eritrea.

As a country that emanated from the struggle for human right,Eritrea has mainstreamed it in nation building.Hence, equal rights and opportunities sanctioned by national laws     are promoted. Dignified livelihood targeting  poverty elimination is evolving and the equitable distribution of  resources ensured.Above all the responsible participation of the  people has prevailed.

In this vein, the rule of law is also instituted but fast tracking the political process to strengthen  the infrastructure  that  enhances human rights is a vital goal.Revised  national  codes have been declared and writing a new constitution  is on course. The initiative to reorganize government institutions and administrations is also ongoing to consolidate   guidance and effective services.

The above are  home grown pragmatic efforts driven by an independent political  stance. They embody national  ownership and priorities. They are based on Eritrea’s context,  needs and human betterment ideals. Peace and stability thus prevails,as an achievement earned  by the effort and sacrifice of all the citizens.

However, there is no complacency, as  there is a long way to go. But the achievements and  resilience of the people and government to sustain  this development trajectory epitomize the nation’s strength.

The ongoing plan now is to redouble the efforts and create a qualitative leap in the foreseeable  future.

On the other hand, Eritrea still faces existential external threats  i.e. occupation, illegal  sanctions and belligerent stances. Neither has these threats succeeded to roll back    Eritrea’s progress,nor have they subdued the resilience of the  people and government. Even so,they all constitute a violation of the human and peoples’ rights and depict the  failure of the international system.

Besides, Eritrea has  been  targeted under  the politically  motivated, country specific resolutions and  mechanisms  of the Human Rights Council.This futile attempt is  perpetuated   to subdue the nation under the pretext of human rights. Nevertheless, Eritrea continues to strengthen its bilateral, regional and international level engagement and cooperation  including on human rights. The UPR in   particular serves as a vital entry point and the evolving cooperation partnerships with the UN and EU are considered important in this  respect.

Humanity is faced with the challenges of global injustices aggravated by geopolitical agendas and interests.The prevailing level of underdevelopment and global poverty also  poses challenges to human and peoples’ rights.

Every nation faces human right challenges.However, the politicization of human right by the powers of domination to vilify and destabilize nations is unlawful and constitutes a  grave danger. The human right architecture is already suffering from the emerging polarization as a result of this situation.

In the above context, the all-round development basis of rights including the  right to  development   is  negated. Dichotomy in the handling   of rights,  the focus being on political and civil rights, has become  symptomatic. The  pressure on developing  countries  to leap frog political rights  at  the expense   of economic, social and cultural rights is also being used as a means of coercion.

In  the  event,   the   Human  Right Council  as  a body  formed  out of the failure  of its predecessor seems to be at the crossroads and is falling prey  to  the   above   situation. The Human Right Day is thus a solid reminder  of the  need  to rectify  the  looming functional crisis in the international  system.

On this occasion, the Ministry of Foreign  Affairs reiterates  the Eritrean  Government  commitment  and responsibility  to advance human rights to its people. It will also   strengthen its engagement and cooperation as well as join the collective effort to address the emerging crisis in the global human architecture.

I thank you Ladies and Gentlemen!