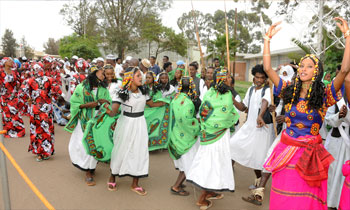 Human beings are rooted in cultural systems, molded and constrained by their cultures, and for the most part, act only within the cultural realities of their lives. Development of any kind, be it social, political or economic, requires supportive culture. Political, economic and military performances of a nation are not only highly influenced – potentially even determined – by the existing culture.

The policies and the working culture must be congruent with one another. Policy is said to be effective and operative if it creates harmony with the culture. But this does not mean that government policy should hold the tail of culture. Every culture is not inherently positive and progressive. We should not allow ourselves to be mired in reactionary, conservative and destructive elements of culture. Culture is not a static phenomena; it often involves a continuous process of washing and chopping to remove the unnecessary elements.

Culture is the medium through which individuals express their ability to fulfill themselves and it is therefore an integral part of development. A society without the knowledge of their past history and culture is like a tree without roots. Culture is also a vehicle for economic development, social cohesion and the formation of a modern and competitive political system. A strong national culture characterized by a strong work ethic, wise use of resources, mutual respect, and appreciation of diversity is, above all, the product of progressive culture.

Culture affects the ability of countries to establish and sustain economic and political development. The impact of culture on economic development, either as a stimulus or a constraint is vivid. For example racial or gender-based violence and other forms of discrimination in a society cannot be eliminated without changing the culture. In this case, the diverse culture of Eritrea promotes personal responsibility, discipline and hard work, the value of education, honorable service, devotion to a purpose, and commitment to family and community. At the same time however, there still exist strong cultural and religious elements that often represent obstacles to the enormous efforts made by Eritrean society in the battle against poverty and backwardness. For example, consumerism and consumer culture are quietly, yet steadily, spreading throughout our society. If we continue to act as though the highest fulfillment comes from consumption or that more is inherently “better”, it is going to be very hard to realize our goals of development.

Culture affects the economic behavior of the society through different means, such as festivals and celebrations of cultural, national or religious days. Every society has a number of meaningful days and people tend to perform some rituals and even organize activities to celebrate. The problem arises not necessarily in the meanings attached to the day, but to the manner of celebration; quite often within the latter we completely forget the former. Many of our cultural practices like engagement, marriage, graduation ceremony, baptism, due to the spread of consumerism and other factors have grown to be more extravagant and the definition of excessive. Simplicity has been replaced by complexity. Attempts have been made to return the focus of celebrations on their original meanings, but changes are slow. Transforming cultures is of course not an easy task. It will require individuals, communities, government and non-government institutions to work tirelessly to cut the unreasonable association of happiness and consumption.

Celebration may strength our cultural identity but if it overlooks or neglects the issue being celebrated it becomes harmful and can dilute the importance of the event. Moreover, excessive celebration poses socio-economic challenges, including to individual or family savings. Together with a culture of work, there must be a culture of leisure. By all means people need time to relax, to be together with families, to enjoy and play, but not at the cost of their regular income or to the level of falling into considerable debt. The regular income of the general population is relatively low and thus unable to cover vast, extravagant celebrations. Excessive celebrations dilute the meaning of our events, bring neither economic wellbeing nor social betterment to the general population, and we should consider their role in our families or communities.

Globalization, with its ever-increasing social and economic interactions, provides opportunities for development, while also presenting enormous challenges to traditional culture and identity. Culture, in all its forms, is essential to address these global challenges. Institutions of higher education, museums and other institutions working close to culture and society through research and education, have to lead and provide the population with relevant and needed culture and expose the futility of extravagance. We have to develop a culture which satisfies the material and spiritual needs of individuals and communities.

Foreign cultures having nothing to do with our culture and belief are also gaining popularity which encourages wastage. For example, Christmas celebrations and Valentine’s Day are gaining popularity, especially within urban areas. Of course, this is not to advocate the refusal of cultural globalization – since it has many great advantages and benefits; rather, what should be challenged, is the blind emulation and worshipping of foreign culture that can dilute our own rich heritage.

Fighting poverty is much harder than fighting an invading army. We can’t defeat poverty only through hard work (the latter is necessary condition, but not a solely sufficient one). We have to develop a lifestyle that is compatible to our conditions. We should spend our time and money on only what is necessary (with the understanding that leisure and happiness are also necessary!). Locally, we often describe to persons who are careful with their money as people with “a scorpion in their pocket.” For many Eritreans, especially the young generation, frugality and retrenchment is not necessarily a virtue. Many reiterate the Tigrigna proverb nxba’H zbl ayexb’Halu “whosoever saves for tomorrow lest live”.

No society has become modern without developing productive and progressive culture. We succeeded in our war for liberation despite the challenging odds because we developed a culture that satisfied the demands of the struggle. Consonance of culture with the objective reality of the society was a key to success. As what has been done during the revolution for independence we need to formulate abstemious and sober culture by adopting positive and useful features and rejecting the bad and harmful aspects. We must develop a culture that promotes saving and investment to support our journey toward individual and community growth and development.

Consumerism works by manufacturing unsatisfied desires in the mind of the people. Time has yet not come for Eritreans with low income to associate happiness and satisfaction with consumption. We have to try to open the many doors to happiness by owning a few keys. For our advantage, we must be savers, investors, and creators, not simply takers and consumers.

The Hill Rewards the Labor