The Hill Rewards the Labor 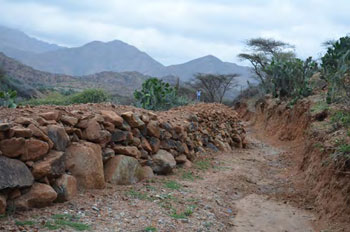 The human brain is unsurprisingly programmed with work and when the work pays off something in return; it is more prone to be engaged in and devote most of the time in habits and activities that are most adored. Who do you think, a nation gives most credit from its devoted expertise? A soldier who is protecting borders, or the doctor healing the patients, or the teacher scientifically shaping citizens’ mind or the writer who inspires people and get them to change or think, or the civil servant? Who? All of them, you would tell.

However, I insist, neither of those mentioned, personally would debate someone else which should be shortlisted first. They all need to eat right? Before their respective activities. You know whom I am addressing. The farmer of course, who produces what you and me consume without mercy on daily basis.

The farmers in our globe are well known for striving and following their deep passion of interests in producing commodities for them and the market. The efficient and consistency oriented mindset they have got, sets them early morning in their fields and doing their tasks before anyone wakes up. What nobody considers is that farmers perform their activities far away from where we actually live that we fail to realize how exhausting their tasks turn to be. Farmers in Eritrea are engaged in producing various commodities partnering with the Ministry of Agriculture and, hence, old ways of cultivation have counted years before being replaced by modern ways. Awareness enhanced and productivity showed a significant positive result.

Speaking of the Agriculture Ministry’s data, for the last ten years, in order to just conserve soil and water: around 26,496 km of circular terracing, about 130,134 km of enclosure terraces, 3385 km of stone terracing as well as soil terraces of 14,336 km were formed. This figure has created the opportunity for many fields to grow various crops. Nationwide and with the participation of all citizens 40,251,426 seedlings are planted in religious places, schools, institutions by community and in slopes. The participation of communities and students as a summer work program was of specific impact.

As we know the Ministry of Agriculture manages a national Greening Campaign for the last decade. Taking that as a baseline, farmers and institutions making a significant contribution are individually rewarded as well as the yearly Duma Award to recompens the winning region.

The focus and emphasis continue, as personal motivation in working the field by farmers is not expected to halt after the rewards. Many farmers are seen to engage themselves in different agricultural activities and some are comprehensive in accommodating multiple tasks in their limited places. But what sometimes impresses and interests, is when you witness individuals engaged in clumsy tasks which would seem impossible to accomplish.

What if we declare on today’s issue, a man who turns a hill into a plain rewarding field. Would that be a fairytale to you? A man who sacrifices his and family’s life for the love of his field. The soil and water conservation when one practically visits the area would say this village people are clever, the truth behind the brilliant piece of agricultural work is actually of one individual, Mr. Abraha Hailemariam.

The MoA personnel had directed their attention towards the city of Segeneiti and found out this man of miracle, all on his own endeavors turned a landmark of hill into a stunning field for cultivation, by fully utilizing and diverting a river passing through the present area. The particular area is called Seled where Mr. Abraha, an industrious farmer, has been in this field for the last fourteen years.

This man claims that a farmer can’t be successful by being away from his field, therefore, he decided to move away from his family and home to closely manage the field. Mr. Abraha is always preoccupied in cultivating crops. He personally made unimaginable terraces in the riverside specific area by fully using a river flowing into it. When he decided to make the area an agricultural field back in 2002, his similar experience helped him to stick on the activity and quickly transform the area into a magnificent agricultural bed, by cropping the edge of the hills every year.

The area by nature is mountainous, nevertheless, Mr. Abraha believes in the fact that hard work when accompanied with water, there is no useless land, and if also taken care against erosion. All the sediments the river brings, simply lay on the previous hill but now became a productive field. Natural resources brought with the sediments dramatically enriched the new land. At the moment, a land almost covering 5 km of area is being used for cultivating different crops. By doing so, so much soil and water was conserved, total income of the household improved. In the past, the man used to purchase the yearly supply for the family, however, momentarily the family does not buy but sells to the market and even supply their livestock with enough nutrition.

With the permission and collaboration of the MoA, Mr. Abraha manages to use fallen trees to enrich the field and remove some parts to avoid shadow to crops in the field. Crops such as maize (main product with variety), yet short crops like barley, wheat and teff are not compatible with that particular area. Nevertheless, the specially considered Maize provided by the Ministry, has shown a fine result where one small container maize sown last year resulted into five quintal.

The Ministry builds relationship with such farmers by providing periodical motivations and incentives. Thus, this exemplary farmer is made to be awarded as the ‘successful farmer’ in soil and water conservation from all farmers in the Southern region. This particular farmer addresses, “that it is a bit hard to be away from the field, farmers need to be close and study the behavior of their field, add what it needs, then booming results would be inevitable”. To get higher productivity, farmers conduct discussion settings in their respective surroundings and share their own agrarian experiences.

Regardless of the field, when people strive for their passion, sooner or later hard work pays off. When considering the agriculture, a tedious yet outcome-oriented activity, calls for time devotion, persistence and follow up. At the end of the day, continually enhanced efforts, as Mr. Abraha did for the sake of the community, leads into indefinite achievements though the aim remains to supply oneself and people around.

“No impractical land but impractical person”, are the words of the farmer. Unconditionally, such individuals’ initiative reminds people that they are complying with the hot issue of our days and that would be :‘Sustainable Development’.