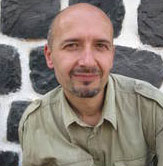 I have presented a paper about the history of the canned food in Eritrea from the creation of the first canneries, in 1914, up to the 1960s.

My article explores the history of the canned food sector which, alongside the salt industry, can be considered one of the first industrial sector to take root in Eritrea. My aim is to highlight the social and cultural changes produced in the country by the arrival of the first industrial activities. The introduction of industrial production in a new environment required a series of modifications and adaptation at various levels: modern and scientific techniques of livestock breeding were introduced, local breeds were improved, “rational” techniques were adopted but also factory workers were demanded to adopt new ways of conceptualizing labour and time, while a new work-ethic was introduced.

The study of the history of food industry in Eritrea offers also an invaluable perspective on how gender relations have changed over time.

The food industry has always accommodated large number of female workers: in Asmara, halfway through the 1960s, SOPRAL (food) and Barattolo (textiles) mainly employed female workers. At the height of its activity, Barattolo, a cotton factory, had a workforce of around 3 thousand workers, 70% of whom were women. Strong female contingents were employed in the industry for the processing of agricultural products, such as the Azienda Casciani – De Nadai di Elaberet and the AMAP match factory. The factory offered women workers a job that was often soul-destroying but that provided them with a salary and so the possibility to renegotiate her role in the family and in society.

I think that the participants were a little bit puzzled by the apparent oddity of the topic. But once they realized that this is just another way to talk about Eritrean social fabric, I hope they enjoyed the presentation and the following discussion that was very inspiring.

The period 1914-1918 will mark the celebration of the First World War Centenary. It seems to me that most of the people is unaware of the impact the WWII had on Eritrea. My presentation has tried to highlight one of the most dramatic way in which WWII affected Eritrea. During the war demand for canned food raised and most of the European countries started looking for new sources of cheap meat to feed their soldiers.

In 1914, the Torrigiani canneries started operating in Eritrea, according to the contract that was signed with the Italian army, the canneries were supposed to provide 1 million tins per year. Italy’s entering the war in 1915 conferred a strategic value to the Eritrean production that rapidly gained fundamental importance for the destiny of the Italian army during the First World War. As a result of the urgent requests from Italy, the factory in Asmara had committed to supply 24 million cans up to 1921-22, 16 million of which were to be provided in the two years period from 1917- 1918 alone. In the space of a few years, the Eritrean administration was requested to provide more than seven times the original provision.

Unable to find the cattle needed in Eritrea, the Italians administration turned first to Yemen and then to Ethiopia. The many difficulties encountered during the six years of activity did not prevent the Torrigiani to produce more than 12 million cans of meat, i.e. about 120 thousand tons of meat. Beside that, Eritrea supplied the Italian war effort hides for a value of 20 million Lire, 50 thousand tons of dum palm and 60,000 tons of potassium chloride (used in explosives). Eritrean troops were deployed in Libya, one of the many WWII’s fronts.

At the end of the war everyone acknowledged that the Torrigiani Company had “made remarkable efforts” in order to meet “the army’s meat requirements”. However, the cost of this success had been a general impoverishment of one of the most important Eritrean resources. The local livestock was almost depleted and it took several years in order to reach to pre-war levels.

For the canned and frozen meat industries, the early 1960s represented the golden era. Between 1962 and 1965, investments in the sector underwent an increase of 547.3% with 6 industries active in the sector: SOPRAL, INCODE, SARICE, AIMCO and EMCO. The canneries’ boom was based on Ethiopia providing the raw material (cows) and Eritrea the technical expertise (processing and canning). During the 1960s Eritrea was exporting canned food everywhere: Yemen, Sudan, Saudi Arabia, Israel, Britain and Italy.

This study is a further step in the direction of understanding the reactions of the Eritrean society to the vast changes brought by colonialism. For good or ill, Italian colonialism had an impact on environment, social relationships, the economy and the cultural life of many Eritreans.

ICES has represented a turning point in Eritrean studies. There is the need to strengthen the relations between scholars working on Eritrea. Among the presenters there were many young and talented Eritrean scholars, I hope that in the future there will be spaces for working together.

I’m working on the history of Eritrea in the period 1896-1913. I will use the life and work of a professional photographer based in Eritrea in those years: Alessandro Comini. A few years ago I was able to locate part of his photographic archive. Working on some 300 original glass plates I will try to illustrate how Italian colonialism conceptualized Eritrea and how it made use of its natural and human resources. The pictures of Alessandro Combini are astonishingly beautiful and details many aspects of Eritrean life at the beginning of the 20th century but the real challenge remains how to contextualize that photographs.