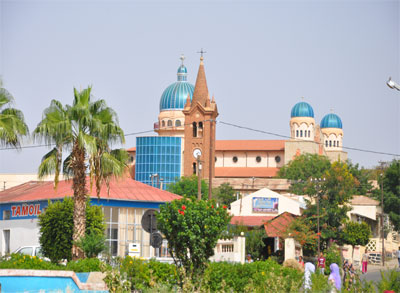 Looking at the architectural structure of the buildings in the city of Keren make one understand that this was a town frequented by the Turkish colonizers in the region. But it was also a town frequented by the other colonizers that occupied the Eritrea. However, it was the Turkish that first constructed modern buildings in the town along with introducing trade activities.

In 1881, nuns from France established the St. Mary Monastery North of Keren, which made the town famous. The land was given to the nuns so they can support themselves through agricultural activities, and they put the statues of St. Mary in the largest tree in the area which results repeated visit from the inhabitants of the area and tourists all over the country every year. At present, the numbers of people visiting the site reach around 40 thousand.

The coming of Italians from the coastal area and the Middle East was followed by the emigration of thousands of Arabs, Jews, Greeks and Armenians to the Horn region. Majority of those migrants were engaged in trade activities especially the Greek, and as a result a Greek church was built in Keren.

Between 1906 and 1916, the Italian colonizers constructed the Administration building, by Feyorcardo Vitorio.

This building was built at the times known as to be the town’s modernization period. Jacobo Givonti, an Italian businessman constructed the present Commercial Bank as a store in 1916. Cinema Impero and the residential complexes in the area were constructed in the same year, 1916.

Later with the coming of fascist Italian rulers to Eritrea, Caza Del Fache and Caza Del Majori were constructed in 1920 to be the recreation and residential buildings respectively for the Italian officials in the country.

Starting from 1938 a new master plan and infrastructure begun to be put in place in developing and expanding the town of Keren. By the end of World War II, the town was used as the main military base for the Italian colonizers in the country. The Italians were not only using the town as the military base to defend its enemies but also to build East Africa Italian Empire in the region. This plan was to expand beyond Somalia, Eritrea and Ethiopia to the British colonies of Uganda and Kenya. As a result, Italy joined WW II planning to occupy the British Somali land, Djibouti and Suez Canal.

Hence, administrator of the Italian colonization in the area, Dachosta, deployed his best soldiers in Keren to protect the British attack coming from the Sudan.

The soldiers of the Union forces were engaged in a tough battle in North Africa and sending additional troops to Eritrea was a far cry, not only that the WW II being fought in Eritrea was also vital due to the fact that if Eritrea end up in the hands of the Axis forces then it would end the existence of the Germans in the Red Sea. North East from the town of Keren, there is a place called Tenkuluhas where WW II in Eritrea ended. This place is named after the bloody war between the Italians and British in the area, and has its name from the Bilen language meaning the place where the soldiers of the gigantic forces wipe out.