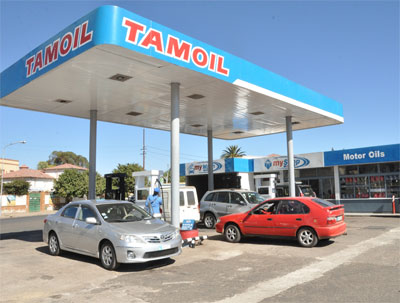 Part of development is surely the work of companies operating in the country creating jobs, a culture of competitiveness, and a sense of work ethic in line with international standards as well as supplying the demand. One of them, Tamoil, is a well-known oil company leading the market in Eritrea after taking over Shell Company in 2004.

In today’s issue, after an organized staff training by the company at Asmara Palace, on Thursday, 15 December; yesterday, thus, I decided to walk down to their office located just by one of my favorite coffee places, Asmara Sweet Café. While sipping my usual macchiato before meeting them, I roughly wrote some questions I had in mind and especially as regards to the incentives of Tamoil towards the people of Eritrea and its supply of this black gold.

Indeed, this black gold known as oil is one of the raw material that the world cannot live without, and despite being a non-renewable energy; its consumption worldwide continues to be significant. In fact, the International Energy Agency (IEA) stressed that according to the Oil Market Report of 2016, the forecasts in terms of oil consumption may be close to 96 million barrels of oil and liquid fuels per day or about 35 billion barrels a year (a barrel is equivalent to 159 liters). The African continent continues to be an important consumer as well as supplier of petroleum and without a doubt, Eritrea and its growing urban dwellers and middle-class citizens fervent of cars is showing an increase in oil demand. Let’s see how Tamoil, the leading oil company in Eritrea, is responding to this demand and its working method.

In doing so, Mr. Simon Weldemichael, Sales and Marketing Manager, took the time to discuss and answer some of the points written in my notebook. In fact, as Eritrea has a social approach to its policies, important part of products and supplies are subsidized in order to meet the need of the people and especially to the poorer layers of society. Yet, industrial companies such as Tamoil has to combine this aspect as well as ensuring that its costumers’ demand are met. Mr. Simon managed to give a brief of his company as well as sharing his 23 years strong professional experience within the oil industry.

When Shell withdrew its station from East Africa, Tamoil bought its facilities in Eritrea in 2004 and acquired about 43 stations as well as two terminals; one based in Assab and the other in Massawa, without failing to recall the aviation fuel and service under a 50/50 share with Total at the Asmara International Airport and a fully owned aviation terminal in Assab. As such, Tamoil Eritrea, under the umbrella of Tamoil Africa Holdings Unlimited and Libya Oil, is able to operate nationwide, ensuring the coverage of all the six regions of Eritrea. The company works closely with the Eritrean Petroleum Corporation (EPC) in the provision of oil, however, Tamoil imports to the local market other products such as marketing and trading of automotive, industrial and greases types of lubricants, kerosene, gas, jet fuel among others.

The company operates through its four distinct departments, the Sales and Marketing, Operations, Terminal stations, Human Resources and Finance, and Commercial under the management of 52 locally recruited staff and the Libyan General Manager as the only non-Eritrean staff. The 43 operating stations are certainly not sufficient, as such, the company is planning to expand in the near future, subject to demand and infrastructure possibilities. For instance, an important station is being renovated in Segalet, near Massawa as well as three others and a new one is planned to be built in the outskirt of Asmara named Mahala.

Through its well established structure and support from its two groups Tamoil Eritrea is associated with, it respond to the demand of various clients both individuals and commercial entities such as Segen Construction, Massawa Port Authority, and the Red Buses among others. The loyalty of its clients is surely a reflection of the company’s willingness to maintain high standards of services and supplies as well as ensuring the safety of its workers and costumers.

Accordingly, under the motto of the ‘SHE’, which is the abbreviation of ‘Safety-Health-Environment’; the company organized a workshop to its staff as well as owners and managers of gas stations on safety, health and environment as well as on work ethics. “We consider our stations owners the ambassadors of Tamoil as they are in direct contact with costumers and they are the image of the company thus, they should reflect the company’s values and principles”, stressed Mr. Simon.

In regards to this important social aspect of the company, I continued asking the Manager on the staff and the outcome expected from such training. This training is a sample of other training given on a regular basis to all employees in terms of safety and general management, making safety a culture, ensure that international standards are met as well as enhancing awareness, improve knowledge and update. Hence, every new employee has to go through a specific induction training as well visiting sites in addiction to on the job training. Further to these, Tamoil Eritrea has a strong monitoring and evaluation system which allow the company to update its work and specific training as he underlined, “Sometimes the practices which have been going on for long may not meet the professionalism we want and this is important for us particularly in customers’ handlings, management, housekeeping etc. It is important that we continue to improve these aspects”.

As I was sitting in Mr. Simon’s office, I noticed the well maintained infrastructure and professionalism. What comes into mind is the working environment, staff and incentives as I bombarded the Manager with further questions. He explained to me that the vision, mission allows the company to meet the ‘SHE’ principle. Indeed, Tamoil Eritrea envisions a key player and for an African-born prosperity while fulfilling its mission to the people, providing responsible efficient products, a good return to shareholders.

With a gender ratio of one in five employees being a female at managerial and secretariat level, the number has room for improvement and surely the appointment of a new female Sales Representative is a step forward. Most employees have either years of high experience within the oil industry or are degree holders in areas such as accounting, management, finance as well as mechanical engineering among others. As many companies in Eritrea are facing an aging staff, Tamoil Eritrea has already worked on a succession plan by ensuring that youth are given opportunities for employment. “We have many young employees who have been released from national service and holders of specific education such as engineering which are important to us”, Mr. Simon highlighted.

In terms of values, as one knows, most oil companies do not necessarily have a good reputation, particularly on the African soil for damaging the environment and having a negative impact on health of local communities. Nonetheless, as Tamoil Eritrea worked under the national guidance of the EPC, the company engages itself in respecting its values which are excellence, fostering innovation, creating new ways of doing things, good relations with society and engagement with local associations by sponsoring events, sport activities or specific civil society groups such as the Eritrean National Diabetes Association (ENDA) while working in harmony with local legislations and the building of a very strong ethical and fair working environment while providing the best services to clients and the respect of the environment by ensuring that the required equipment is in place such as wasting system, safe disposal system through period testing and in working with concerned government bodies.

As one of the international companies operating in Eritrea, Tamoil Eritrea is showing its positive impact in providing services and supplies to the Eritrean people and national institutions by ensuring strong working ethics and respect of national policies. Thus, the strength of the company is surely its ability to access the most remote areas through a retail networks covering areas passing by Nakfa, Afabet, Tesseney, Senafe to Assab.

The work of international company and importing oil made me think of the possibility we have here in Eritrea by exploiting our own resources and perhaps being able to respond to the demand of the people by ‘Made in Eritrea’ black gold.