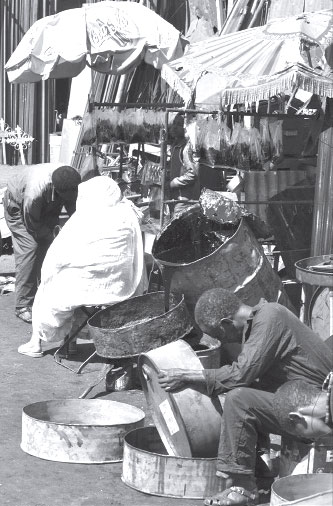 When we were kids we used to repeat after their striking voices. They call upon people to perform their activities. They are workaholics, known by travelling every corner of the capital. They have the habit and passion of earning by working. Locals might have spotted these individuals by the end of this sentence. I can confidently name them the “mobile entrepreneurs”. The individuals I will reveal vary in their respective activities and their nature of activities separate them on how much they can earn in a day.

When an idea is converted into a concrete set of actions or even an action, then a person is crowned as an entrepreneur. Two things remain factual. Earning certain amount of money and following a passion, that is the preliminary fuel that pushes people start certain activity. If I may mention these individuals, the recyclable items collector, the Iron man, the mattress modifier, the cloth carrying man, the vegetal seller and others. All of them are mobile entrepreneurs.

Locally, they own a respective entitlement, the former is beal teramuz since he collects empty bottles and other recyclable items walking or riding on the streets asking loudly if people have them. The next one is the Iron man (I prefer calling), since he fixes metals and metal works people usually use as kitchen utensils and containers. The mattress modifier, loudly voices frnash alo frnash, is a personality who manages modifying baggy mattress, and as others he asks if people have any. The man carrying a bunch of cloths is the Billaroba’e a name commonly known by local dwellers. And above all of these, there comes the kind of early morning women, commonly known as the Bealti Hamli, the Veg sellers.

These people are, I claim, deserve the title of entrepreneurs, and they are indeed. They travel many kms a day to deliver their respective services to the public in need. The recyclable items collector or beal teramuz tries to get items with minimum costs. He plays ‘hard to get game’ and pays customer with one up to five Nakfa for every empty bottles he receives and up to twenty for a broken Member (a traditional chair) which is to be taken for fixing in a site like Medeber (a market for variety of metal and woodwork recycling).

The collections of empty bottles, worn out Shidas, empty oil containers and even chaff are the main ingredients found in the bag behind his back. Surprisingly, such individuals are students who attend their schools in the other hours. They engage themselves in part-time business so they can help themselves and their families. They got only half of the day to accommodate and collect what may seem insignificant but hugely important items. The result would be personal and national economic benefit. These personally employed people have their stakeholders whom they interact after their collection where they sell their gatherings.

Some of these guys visit Medeber to sell worn out products like the Member, since this site is home for metals and other recyclables. Their journey of the day starts early morning or afternoon hours from a spot named Enda Wedi Shekei in Edaga Hamus. And with their high pitch voices they flow into the streets of the city for half of the day, either riding bike or walking.

While still hearing the voice of the beal teramuz, the cloth carrying man Billaroba’e man jumps in, literally alerting people least priced cloths are here, voicing out Billaroba’e! Every ten seconds. He publicizes every yarn for people to take it from him, he claims his cloth are more affordable. All women literally cooking inside their homes quite rashly go out to see what is new from the last time this man brought, if not actually buying it. One thing is obvious in here, the ultimate tradition and habit of bargaining power of buyers, it is quite phenomenal. People never take a product unless exact or somehow relative price to their demands. The Billaroba’e man walk in the streets with a buffet of cloths and yarns thinking these materials are going to be demanded by everyone. Likewise, consumers see this chance as a shortcut to all means, distance to the market and price wise but I doubt on quality.

All of these happenings could be in the morning and even late hours. The women with Veg family on her back uttering Hamli lo Hamli comes in to divert the attention of her customers from the buffet of cloth man. “How much is Hamli Adri (charlock)”, asks one woman. The seller replies, “Of amount you can afford, there is of five box, of ten”. Hearing this, all the women think why not some for lunch or salad to accompany it.

When a family feels a little backache or the bed turns in an ‘M shape’ with many members sleeping over the center, day and night, then the idea of mattress modifying pops in. The man in charge for that is not frequently found in the streets yet revolves the streets in a while. This man is whom we referred as the frnash alo frnash man earlier: the mattress modifier. He walks or rides in the streets having a stick besides him. When business is on, all he does is kneel and beat the mattress as hard as he can and separate the folded ones to evenly distribute it. As he beats the mattress he covers his nose so he is not found dead in it trying to earn for his living. He beats as fast as he can, if may be other mattresses are available in the neighborhood which need same pimping.

The Iron man (my favorite) is unpredictable. When you say I want my big saucepan fixed for today’s pasta, he is absent, when you buy new, he shows up. Regardless that, this man fixes and amends metals and kitchen utensils, since it is not common with our people to buy a new one every time utensils wear out. Zilaham Zelewa (a voice he utters) is his primary tool to connect him with his customers. Beyond that, most of such guys are funny. They know what they do and makes you feel social long as they do their work superbly chatting with one of their customers. They proactively declare prices of fixing to customers and do their activities under a tree or wherever shade they find in the surrounding they are in.

All neighboring women follow the one woman who gives her utensil to be fixed and that keep him to sit in the street for extended hours. They bring their saucepans, coffee utensils, metal barrels (because he coats tar to those perforated or rusty ones). Most of the time this man works at around ten o’clock to later hours. He just doesn’t sit for one disti (local name for saucepan) but that disti brings so many other metal items to keep him on the same spot for the rest of the day. Even this guy as others is more likely to use a bike with a metal luggage behind him carrying his hammers, tar and other tools which help him fix materials.

Numerous other entrepreneurs are also part of the days people would need to hear and taste every day. Some others are also even pleasing to only listen to their voices, such as the man frequently makes himself present in our streets loudly voicing Tsahli lo Tsahli, to sell his traditional clay made black saucepans. I am always pleased to hear his voice as if I am watching ‘The Voice’ TV show.

The initiatives of these people simply allows one to comprehend that the Eritrean society is more active in creating jobs rather than waiting for, which you may find these type of jobs are done by companies in other countries. The beal teramuz, the Iron man or Zilaham Zelewa, the Mattress Modifier Guy, the Billaroba’e guy, are simply the samples and representatives of the entire society whom define life as a matter of hard work. And if small steps are taken, regardless the job, it would definitely beat misery into ground ensuring fulfillment.