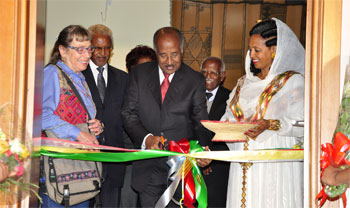 An art exhibition by Prof. Betty LaDuke is being staged at Asmara Palace Hotel. The exhibition was opened by Foreign Minister Osman Saleh on 21 December.

Asmara, 26 December 2016 – An art exhibition by Prof. Betty LaDuke is being staged at Asmara Palace Hotel. The exhibition was opened by Foreign Minister Osman Saleh on 21 December.

Speaking at the opening ceremony in which senior government and PFDJ officials, members of the diplomatic corps and invited guests participated, Ambassador Zemede Tekle,

Commissioner of Culture and Sports, explained that Prof. Betty is a long-time friend of Eritrea since and that the exhibition she is staged attests to that. Ambassador Zemede further indicated that Prof. Betty would hand over the painting to the National Museum of Eritrea.

Prof. Betty LaDuke pointed out that from all the countries she visited she was deeply attracted with Eritrea and its people. Prof. Betty also stated that she came to Eritrea several times beginning from 1994 and expressed admiration for the successful outcome that the Eritrean Government and its people are  registering in all sectors.

The painting and wood panel exhibition was prepared during the period 1995 to 2016 and depicts the culture of Eritrean people and memories of war and peace.

The exhibition would stay open to public until 27 December.