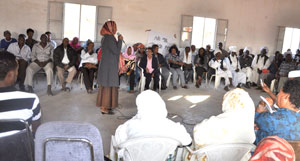 An association of former members of public administration and mass organizations during the struggle for independence known as “Jemahir” held its 1st congress on 24 December in Afabet.

Massawa, 27 December 2016- An association of former members of public administration and mass organizations during the struggle for independence known as “Jemahir” held its 1st congress on 24 December in Afabet.

Present in the opening of the congress held in Shabai-Mender, Afabet, under the theme “Lets Bequeath Our Past History to Future Generations” Mr. Mussa Nurhussien, member of the congress preparatory committee, explained that members of the former Jemahir had played significant role in boosting the political and social awareness as well as in bringing all nationals into common consensus for the common cause of national liberation.

Ms. Liya Ghebreab, Secretary of the association, explained that the objective of the congress is mainly to document all the activities carried out in the past and the experiences acquired back then and there by to make references available for the next generations.

In the congress in which 200 members of the association and former members of mass organizations took part, three research papers that highlighted the role Jemarhir played in varied awareness raising programs, inculcating common understanding on nationals of different ethnic groups, recruitment activities, people’s resistance against colonial powers and in the fight against harmful practices among others were presented.

The papers mainly focused on various activities carried out from the first half of 1970s until independence period particularly in the provision of trainings, organizing women and the youth as well as on people’s active engagement in the struggle for independence.

The participants of the congress indicated that the strong bond that existed between the people and the EPLF was mainly due to raised awareness of the people and effective organizational capacity which are among the cherished values of the struggle for independence that need to be transferred to the coming generations.

The one-day congress was colorfully conducted with the staging of cultural shows and particularly songs produced during the struggle for independence.

Jemahir Association was formed in 2002 during the Jubilee anniversary of the liberation of Afabet.