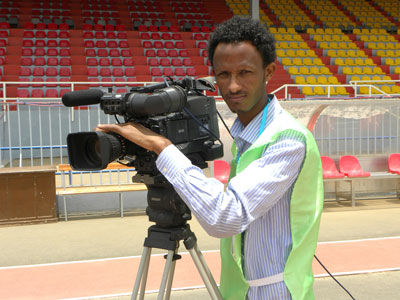 He started with a pencil when he was much younger. He then used brushes and water colors and created colorful images. He did not want to stop there, hence, he decided that his principal objective would be to digitalize his art, and so he entered the world of digital art.
Tesfit Abraha in his early 30’s is one of Eritrea’s highly prized new digital artists: he produces a variety of films and video clips. Young photographer and producer, Tesfit Abraha is our guest today.

Painting was my childhood hobby, it started when I was just a boy. And for my career, I studied Fine Arts, I knew since then that I had an unconditional love for art and talent, which I nourished with my childhood passion. After graduating, I presented numerous exhibitions at different places and festivals.

What kind of styles do you follow for your paintings?

I mostly do modern art with a mix of realism. However, I enjoy painting landscapes with water color. But generally let’s just say I that like to experience different styles.

From a painter to a camera-man, how?

Yes, it’s amazing how it all happened. The truth is that I had no idea of what possibly a video camera could do before my placement to MOI. I was provided with several courses on camera, digital pictures and motion pictures. After some time, I found it very enjoyable since working with a camera, in many ways, resembled my work with canvases, colors and brushes.

Soon after the courses, I started working on documentary films for different programs. It was definitely a good opportunity for me to widen my horizons and, since our job includes traveling around the country, my source of inspiration grew by the day in number and kind.

Also, I took a very interesting course by instructors of the same profession from German’s Doce Wele. It was actually then that I got my comprehensive know-how on using a camera as a gadget central to my life. Also those courses gave me the courage to philosophize on digital pictures on my own as well as to enhance my knowledge with unremitting interest.

I am also a photographer, I take photos at different places just for the sake of documentation. I have almost over 2,000 photos that I cherish.

I heard you have won awards for some of those photos…

True! I won 2nd place award in the silver jubilee of the NUEW for a photo I had presented and another one in 2015 in a contest held for professional photographers where I received first place. The latter was one of the simplest pictures ever; it was a photograph depicting a mother. The photograph got so much attention for the depth it embraced in its simplicity.

Traveling? Which was your most memorable experience?

I enjoyed shooting every part of Eritrea in the process of nation building.

I learned that one needs a lot to be a professional documentary filmmaker. You need to be well-informed about what kind of topic you’re dealing with and how you’ll eventually present it. Film is about conversing with pictures and not words so one would better know and operate all of the ingredients, starting with landscape, light, inherent mood and so on.

Of course, making films for journalistic purposes like news, documentaries and reportages is different and calls for special attention and delicacy so I believe that was extremely lucky to work in this peculiar field.

You are also a writer, aren’t you?

Yes I am. I have a principle.

I believe that everyone should try and do everything and anything just to know their strengths and weaknesses. That’s one way you could succeed in life.

Going back to my writing though, when shooting a movie, you are supplied with the script to fully understand how the movie is going to be. Similarly when I was shooting one I looked at a script and wanted to come up with my own movie. I thought I could do it. My first movie “reception” was actually well received and it introduced me to the public. So far, I have filmed more than 50.

Tell me about the video clips you have filmed?

I told you earlier, it is my principle to try out new things, and in doing so I found filming video clips to be interesting and enjoyable. I worked on it very hard until I got an idea.

For a while I decided to focus and invest and exclusively on producing video clips for songs of new singers. In a way, this would mean both risking and benefitting from bringing new artists to light. In addition to encouraging young artists, it was overly gratifying and, of course, I’d benefit from the progress and fame they are bound to reach as they are young, passionate, and full of innovative ideas and extremely energetic. So it is a win-win project. Since then, I have shot and produced more than 600 video clips of different singers.

Your fiancé is actually one of them?

Yes she is. I first saw her singing in piano bars and I always thought if she’d do amazing with her own album. My team and I convinced her to trust us and so together we released a whole album in which we invested a lot of energy. I felt good introducing a good artist to the entertainment industry as well as the general public.

What are the obstacles an artist would inevitably face?

There are obstacles for sure. Basically the shortage of materials and good cameras particularly, would be the hardest one.

I believe that young Eritrean artist have the talent and ability enough to get us qualified for international levels. We have amazing cameramen with unbelievable aptitude but we need the provision of equitable materials to match up with their standards.

Unforgettable moments of your carrier

I shot the Africa Cycling race and that was the most memorable experience of my carrier. For races, the camera is handheld or on shoulders. Hence, we would take the best close-up shots from almost anything that moves. Cars, monocycles and so on. And it is not just easy to travel thousands of kilometers to cover the race.

It is not an easy task to travel the country, we had almost got into an accident in Keren but we did not care at all. We had in us that young passion and dedication. Most importantly, what all of my colleagues want, is to make sure that we present the best works for the public. My favorite shot was that one of Daniel Teklehaimonot sprinting to the finish line, I had the best angle for my shoot!

And my second favorite shoot was one of the CECAFA held in Eritrea. I was looking for reactions to depict the enthusiasm in the Eritrean fans and so I took a shoot of a young boy crying when the Red Sea Camels, our country’s national team, lost the game. I just love that shot!

What does a camera mean to you?

My cameras, videos and pictures are my family. I live alone, but I have my paintings and endless pictures in my room that keep me cozy.

What are we to expect from you in the future?

This is a question I fear the most. But currently I am working on different video clips, and two of my films are on the way. Hopefully these movies will have a great response from the general public because I invested so much.

Oh, and on the way, I would like to thank everyone who has supported me in every way.

Thank you for your time Tesfit!

A Short Course on How to Make Taita