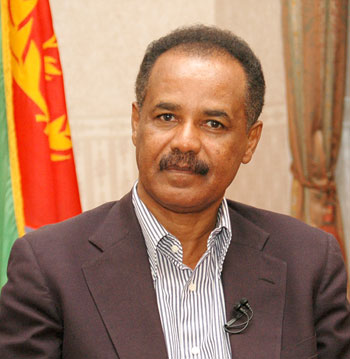 President Isaias Afwerki sent a message to several Heads of State and Government on the advent of the New Year once again drawing their attention to continued injustices meted to Eritrea.

Asmara, 1 January 2017 – President Isaias Afwerki sent a message to several Heads of State and Government on the advent of the New Year once again drawing their attention to continued injustices meted to Eritrea. The President underlined that such indefensible acts not only contravene fundamental tenets of international law and morality but are also fraught with perilous threats to regional peace and security.

Recalling that 14 years have elapsed since the adoption of the Eritrea-Ethiopia Boundary Commission ruling on the border delimitation and demarcation,  the President pointed out that sovereign Eritrean territories still remain under occupation. In this connection, he called on the leaders to ensure the respect of the rule of law.

President Isaias went on to underline that the Eritrean people have been wronged several times at the hands of the UN in the past and as such they deserve redress and reparations for the wrongs done and not continued and unjustified punishment.

In regard to the illegal and unfair sanctions against Eritrea, the President noted that the unjustifiable sanctions were passed deceitfully on fabricated charges which had no basis on law or facts. President Isaias stressed that the main purpose of the sanctions was to deflect international attention from the occupation of sovereign Eritrean territories and thereby corner Eritrea from advocating its legitimate rights.

President Isaias underlined that the continued wrong doings against the Eritrean people, coupled with the occupation of sovereign Eritrean territories constitute harm beyond reparation and called on the UN Security Council to rectify its errors without further delay.