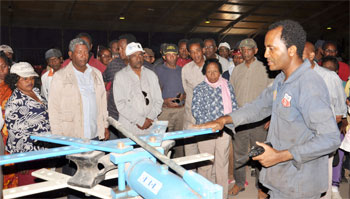 About 200 staff members of the Foreign Ministry headed by Minister Osman Saleh have conducted an inspection tour of development projects in Gash-Barka region from 28-30 December 2016.

Asmara, 4 January 2017 –   About 200 staff members of the Foreign Ministry headed by Minister Osman Saleh have conducted an inspection tour of development projects in Gash-Barka region from 28-30 December 2016.

They visited the electric power plant, dam and irrigation projects in Kerkebet sub-zone and received briefing by experts at the projects.

In the course of their visit to the National Education and Vocational Training Center in Sawa, the Commander of the centre, Colonel Debesai Gide, highlighted the role Sawa is playing in national development programs in general and the nurturing of a disciplined youth in particular.

Accompanied by the Head of the Eritrean Livestock and Crops Corporation, Maj. Kibreab Abraham, the members visited Alebu Centre of Innovation, Gerset Dam and agricultural projects there in addition to Fanko Electric Power Plant.

In briefings to the visitors, Mr. Hailezghi Habte, Head of the Eritrean Livestock and Crops Corporation (southern division) noted that commendable outcome has been registered as regards seed and seedlings productivity in the pilot projects near Gerset Dam.

During the lunch hosted in honor of the visitors in Fanko, Maj. Kibreab underscore the government’s substantial investments in the construction of hydraulic structures, agricultural projects, ensuring provision of electricity supply and skilled human resource development.

Foreign Minister Osman Saleh on his part explained that the development projects implemented through the active participation of the citzens in the region would provide added impetus to future undertakings.

Upon concluding their visit in Barentu, the Foreign Ministry staff members attended luncheon hosted by the Commander of the Western Front, Brig. General Teckle Kiflai.