“Give Eritrea a Chance”’ 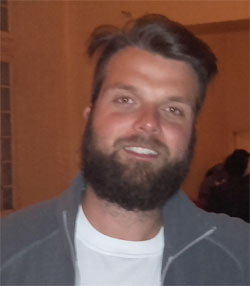 My friend invited me to join him in his trip to his homeland. Also, I was very curious as there was not much information in Germany about Eritrea. Whatever I hear from working with migrants it’s very questionable and certainly never really enough.

Eritrea has a history of struggle; on the news we do hear similar struggles of other countries, but nothing about Eritrea. And it is very recent, it is not like it happened 70 or a 100 years ago, it only happened 25 years ago, yet little is talked about it.

So I was extremely curious to know about Eritrea, and of course, when I came to Eritrea I realized how little information I had about Eritrea.

Actually, I had the image of Eritrea as a very repressive and exploitive country. I thought it was somewhat true because there are a lot of migrants coming to Germany claiming to be Eritreans and they have a high probability of staying. Whereas those from other countries such as Cameroon, for example, they get automatically sent back. And I actually did go to Cameroon and I feel a lot safer here, and I think Eritrea is a lot better in many ways.

So technically, this would sum up, the thoughts I had about Eritrea.

And then I came to Eritrea, and I noticed that the people did not look unhappy or anything of the sort. In reality I saw the people here are happy, confident and extremely elegant!

I visited Asmara and I also went to Keren and Massawa. It was a very interesting experience to actually be part of the people, who are very hospitable. I enjoyed the superb coffee ceremony.

We went to Keren, and there I met two ladies, who told us about women organization in Eritrea. They told me it started during the armed struggle for independence and that it has, ever since and up to now, b e e n looking after the rights of women in all aspects. They told me that the Union has, since the time of war, worked to eliminate discrimination against women and how the role of women has been equally stratified at governmental posts.

They also told me that women fought equally alongside men for independence. And I was amazed as is not a common occurrence. And what I found interesting is Eritrean women are equally treated, in fact this might be new to me and ordinary to you, but I noticed women here are very confident.

Extraordinarily, throughout the rest of my trip I felt safe, very safe in fact, even though, this is my first time here in Eritrea, at times I thought I even felt safer here than in Germany. I mean, I have been here for two and a half weeks so far and I feel extremely comfortable.

I liked the ancient port, it was impressive to see all of the buildings and monuments from hundreds of years back. I also noticed how the war has brought destructions, the buildings still have traces of war; I wonder why there is no restoration. You have these beautiful monuments that I think you really need thorough renovation and repair.

It is sad to see these monuments a g e without a t t e n t i o n , I am not suggesting to eliminate the traces of war, after all it has only been twenty five years, nevertheless some restoration would make Massawa even more stunning. I believe that it has interesting stories that would do well for people who are abroad.

I think that safety is actually one of the most important factors that a country needs to provide to its citizens and visitors at all costs.

While unfortunately safety is not a grant in many parts of the world. However, I was told, the people here have high regards for moral traditional values and it clearly shows. It is the sense of respect that people have for one and other as well as for strangers that makes the country extremely safe.

I heard our German Ambassador to Eritrea walks to his office, and was amazed, really. Women walk home alone even at night without fear of anything.

For example I like and respect how the Eritrean people live in harmony despite religious differences. Even in Germany one can feel that sometimes there are tensions between followers of opposite religions; there is that tendency to think less of other religions.

I talked to some Christians and Muslims here. The women I talked to in Keren for example were Muslim followers, they were very open-minded about other cultures and religions.
I read a letter wrote on your newspaper, Eritrea Profile, by an American professor, Prof. Theodore, he was astonished by this particular aspect of Eritrean people. Prior to his arrival he had heard of Eritrea being labelled as the North Korea of Africa but eventually ended up believing otherwise during his visit.

Yes, there is. I feel very sorry that people leave the country. I have the impression that they are rushing a bit and I don’t understand why when clearly you have a good country being built. Eritrea is being built on principles of equality such as free education for all and health service for all its people.

And all I ever dream of when I think of a good nation to live in, is one that does not force its people to pay huge amount of taxes for primary services nor does it discriminate rich and poor when accessing to health and education provisions as well as social services.

Maybe the people that are leaving Eritrea are not giving their country much time to form itself and in due course be one fully comfortable place for the society to live in. Perhaps if they give Eritrea some time, it really can be that shiny place they imagine.

The country has been independent only for 25 years and historians suggest that after a revolutionary struggle, at least 30 years are minimally needed for a nation to be back on its feet. Besides, your 25 of independence are not really that long at all after a struggle of 30 years.

It takes time to rebuild a country. Maybe you and the migrants do not have the best situation but nonetheless how the Eritrean people talk about their history of revolution and how they take pride in it and have a whole lot of respect for their martyrs is just impressive and it shows that every Eritrean is fond and proud of being one.

Therefore I think the people should give Eritrea a little more time and I hope that the rest of world gives your country a chance to build itself on its own principles, which it has upheld since the beginning.

Women: The Engine for Social Development

Over 480 Graduate from SMAP