Uncovering Veils of Honeymoons Part I 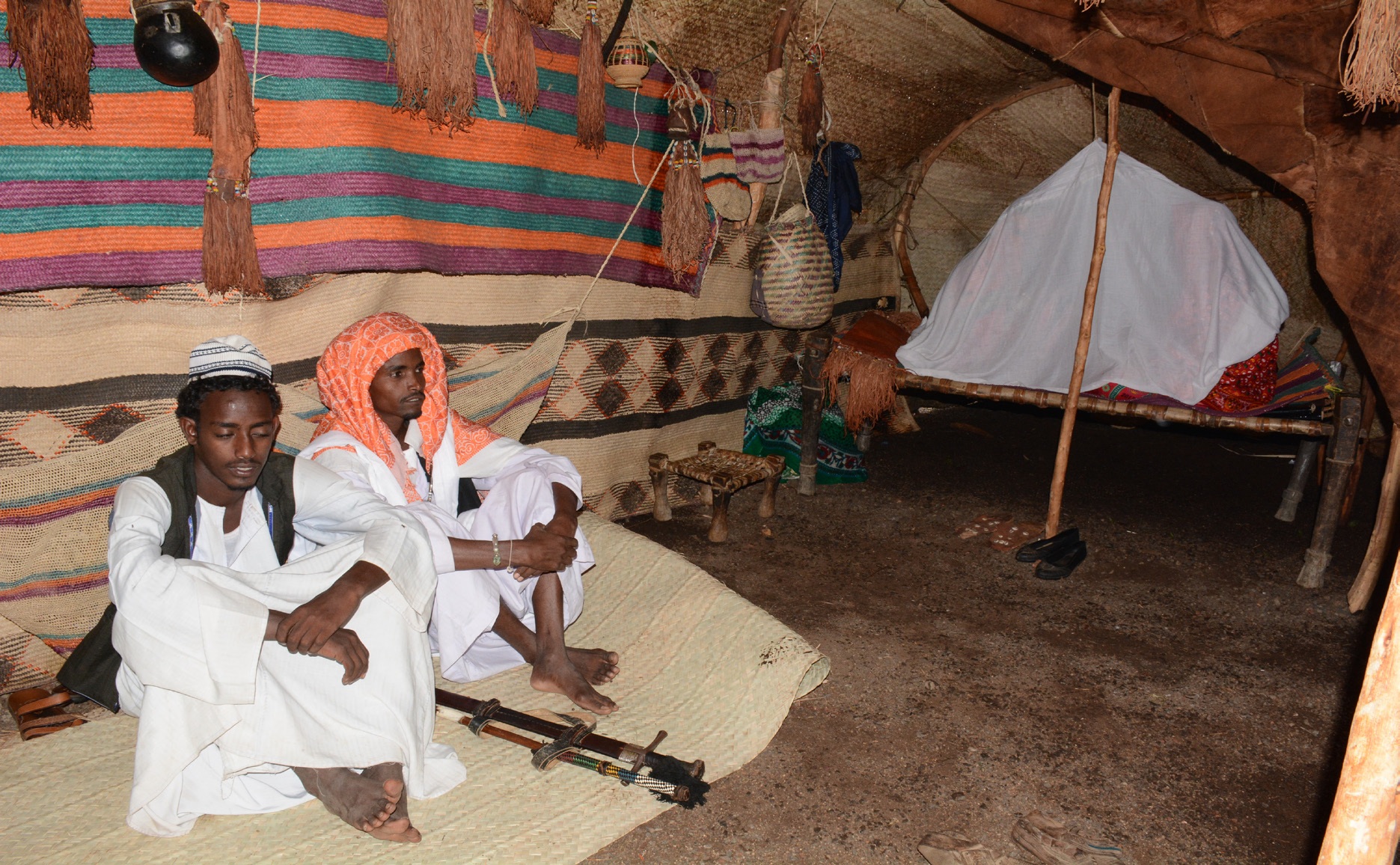 Tribes in the world exhibit and honor their respective cultural habits which they keenly are devoted to exercise ordinarily. Someway, when people from other nations observe disciplines that are different from theirs, they find themselves surprised and inquire more about the character. Merely, it is because, culture is a way of life as a whole. For this edition of culture and Arts, it is an honor to disclose the interesting and surprising honeymoon styles Eritrean ethnic groups demonstrate. The existing season is the busiest marriage and honeymoon season of the year.

The usual and widespread honeymoon most people are familiar with in the case of Eritrea is that of the Tigrinya ethnic group. The treatment for the newlywed pair is exceptional; the titles of the newlyweds becomes my lord and my lady for the entire honeymoon. Everything in the house is made a priority for them and are served by a royal treatment. In my today’s issue however, I focused on the rest of Eritrea’s ethnic groups, and I found it fascinating!

A special name for a honeymoon period in this tribe is Adi Are. Only seven days are the staying for the newlywed and friends. The Arsew (best man) for the marriage has to be a relative and is selected from a number of men while they all put their sticks on the ground. The chosen one is then the best man for the groom for the seven honeymoon days and another lady from family (either sister of the groom or close relative) for the bride. After the seven days of staying, the Arsew mentions three terms, the Kladet, Kebero men (drum men), Sibole to take. Kladet are the items brought by the bride for the groom to wear on the neck, while the Sibole is a food container for all types of food prepared by the community and friends not by the groom’s family.

Honey and porridge are commonly served in the occasion. The best part is here; the best men and friends go out singing to bring food to the house of the honeymooners. They are culturally authorized to steal from houses of neighbors or even strangers. No stolen family complains since it is a renowned habit of the after wedding.

When the seventh day approaches, it is Simbl Edim- this day is the day the best men sprawl. It is a timing for outside activities; playing games while going to the river to wash clothes. On this last night, it is Maesa (get together) event, only youth are gathered to share the stolen items and food from the last six days. They spend the night dancing and playing games named Kiekie, Shadah, La’ele and the best one Ayanta, where they sit and sing to avoid fatigue.

The bride stays at her in-law for thirty days. After this, she returns home and enjoys a three to six month stay with her family. The groom now is traditionally expected to visit the house of the bride to fulfill the event of Urba – a period the groom and his best men visit the house to be introduced the mother of the bride, having all his presents, (food and clothes for the family) with him. If he is unable to go there for various reasons, then he needs to send the items to the house.

Normally, the bride stays at her parents’ place until she delivers her first baby because her family would only visit their daughter rarely after she moves out with her husband.

In this ethnic group, the after marriage process is a bit different. The groom with his best men and the bride with her maid of honor bounce back to their homes. In the tradition of the Bidawit, the groom does not lift his jewels from his neck for seven days. This helps as a sign for the rest of the community to identify him as a groom and devote themselves to invite him with whatever they have (goat, milk), that is served in honor of him. Nonetheless, the couple separate for two years after wedding and stay with their respective families.

After two years, the groom asks for a home to settle in with his wife and make a living. Then a new house is built for him. However, another mystery is that the couple are not simply allowed to the new house; rather they are required to pass through some rites and follow some rules.

The groom enters the house by night with his friends. Likewise, the bride gets in with her female friends. For the next seven days they enter the house on the dark and sleep on separate rooms, still no chance for them to interact because they also leave the house before sun rise.

Right on the seventh day the groom plays ‘wife grabbing game’, while the bride sleeping in the middle of her two or three friends. If the groom wins and properly grabs her, then his best man let him flee from the house with his wife. Afterwards, they can move into their new house together and start their life. But, if he fails to capture her and captures someone else instead and tells him she is not his wife, the bride gets the chance to flee for the night and extra days to spend with friends.

Then, if the groom decides to lead his own life both of them need to invest for their living on their sides. Most of the time, such marriages start their formal life after the wife gets pregnant. The hide and seek continues until this time. At the moment due to the dynamic changes in the society and urbanization reasons the culture has been gradually modifying in a way that suits for the people.

Rashaida people who are mostly Sunni Muslims do not have a permanent residence and settled life. They are nomads. As a matter of fact, nobody expects them to be settled during even festive periods since their lifestyle is mobile. The women are known for their elaborate black and red burqas or cover-ups while the men for their sword dances at ceremonies and gatherings.

When a girl from Rashaida feels it is time for her to marry, she unconditionally approaches the man she desires and flirtatiously lifts her veil so that he can see her chin. If he accepts her offer, he must find one hundred camels as a dowry.

The eating habit of the women whenever is incredible. They pass food beneath their mask, and even when they sleep they must still remain lightly covered. The mask is removed only when they are alone with their husbands.

Since the sexes do not mix freely in Rashaida culture, young men and women have few chances to meet of their own accord. As a result, marriages are usually arranged by families.

In this group the bride stays four months before she returns her house. Then she is provided with a one month leave from her husband to visit her family. While she returns back she takes Kolo (roasted oat) from her house to her new crib as a gift. Then after, she gets to visit her family’s house for few days once again. While on the return her mother makes an item named Arfi which is a utensil used for keeping fluids. This utensil is just like the item the Tigrinya group uses, which is called Gagut, as a milk container.

Inside the four month the bride never gets outside yet she can move after late afternoons. The bride is made to be taken to Hadre—a special spot for her after the wedding day. She doesn’t go groom’s house right away. The next day, by night time, she is taken to the groom’s house by her friends. A relief for the bride comes at the balaklado—a moment the bride starts to move by day time. This moments if the groom’s family wants her, they take her. If not, they leave her with her family. Similar to the Saho ethnic group, she delivers her first baby in her family’s house while the second and following are at the husband’s.

At times of special occasions, the bride must be available with the groom. The bride’s family invites the groom by saying “come and drink water”. This time at the house of the bride, the groom leaves some amount of money on the table and the mother of the bride also does the same. He leaves the house without picking up any money from the table. This is done to maintain the relationship between him and the mother-in-law so as not to violate their relationship.

A lady is recognized by the piercing she possesses in her nose. Left side piercing is for unmarried and if it is on the right, men get it as she is a married woman.

Within a four-month period the bride makes some handicrafts using laka (raffia material). The groom only visits his house at night as he is away for work during the day. After four years they settle down on their own to start a family of their own family. Friends contribute what they can towards the couple’s new house so they can live their life—happily ever after.

The Merry Season of Christmas: Yearning for a Simpler Time