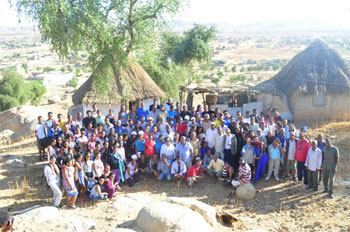 I am often bored, so much so I am surprisingly eloquent in the subject of my own boredom. But trecently I had successfully overcame my boredom with a trip to Gash-Barka and Anseba regions. From visiting dams, a new year’s party in Fanko to a city that never sleeps; what a way to cap off the year!

Eritrea’s Ministry of Foreign Affairs had organized a three day trip to the regions’ developmental cities, which are playing a crucial role in the fight to achieve food security in the country.

It is four o’clock on a cold Wednesday morning; I of course was making my way to the meeting point in downtown Asmara. The night was silent, no cars whatsoever on the road, Asmara was quiet like I had never seen before. I contemplated for a bit just to sit in the middle of the road and soak it all in, unfortunately time was against me to indulge in such.
Having arrived at the checkpoint, five white buses were parked outside the Consular Affairs offices, all proudly displaying the national flag in front of their bonnet, baptized with the names Team Fanko, Sawa, Gerset, Alebu, Kerkebet, waiting for the passengers to take their seats. I get to my assigned bus, Team Fanko.

Our journey around the country’s biggest region was scheduled to start at exactly 5 in the morning. The Government has been vigorously investing in various water harnessing mechanisms and climate-smart agriculture. Western low lands agro-industries, including those at Gereset, the two Fankos and the newly constructed one at Kerkebet were our destinations to observe developments on the ground, built in a bid to ensure food security.

Ensuring food security is one of the top national priorities and the cornerstone for sustainable economic growth and poverty reduction strategies in Eritrea. The goal of the food security strategy is to ensure that all Eritreans have a sufficient quantity of acceptable quality food at an affordable price at any time and place within the country. This is to be achieved largely from a combination of increases in domestic food production and importation from abroad, complemented by food assistance to meet the supply gap particularly during emergencies such as severe drought. Food security at the household level is fundamental and this goal will be achieved by raising the incomes and quality of life of the poorest and most food insecure segments of the population. It also entails assisting vulnerable groups establish sustainable means of livelihood to become food secure (e.g. internally displaced people and returnees etc). It is the intention and commitment of the Government to reduce and finally eliminate food insecurity on a sustainable basis.

In a country like Eritrea where there is scarcity of rainfall, it’s essential that the Government and the community seek alternative solutions to alleviate water problem. That alternative solution, mainly, is catching every drop of water through building water catchment schemes and constructing micro- and macro-dams.

These dams and water catchment schemes would not only be confined to supplying the society with the needed water supply, both for them and their animals, but they also have a big role in changing the eco-system in the country and add impetus to other significant development programs such as the development of irrigation farming and thereby ensuring food security.

Eritrea has been, until the Ethiopian occupation, renowned for its agro-industries that have been supplying fruits and vegetables to the Middle East and as far as Europe. The Elebered agro-industry was one of the many agro-industry sites in the country. The agro-industry has been running its agricultural activities not depending only on the natural rainfall; it has been conducted through modern irrigation system. History tells us also the agro-industry has been visited every weekend by many foreign and local tourists, who have been going to enjoy the fresh air and buy fresh agricultural products such as oranges, mangoes, dairy products, wine and vegetables.”(National Tourism Association).

The development of resilient agricultural and agro-industrial sectors is essential for the construction of a sustainable future for developing countries and, more generally, for humanity.

Addressing this challenge requires huge investments to develop the entire value chain in the sector: from improving yields and collection operations on farms to the transportation of products and their distribution in local, regional or international markets, and including activities related to processing and storage (e.g factories, warehouses, refrigeration, etc.).
To promote sustainable development based on climate-smart agro-based industries, the Eritrean crops, fruits, vegetables and livestock cooperatives have taken over several agro-industry projects, Kerkebet agro-industry is one of them. With a huge water capacity and hundreds of acres of cultivatable land, the Kerkebet agro-industry has become the largest agro-industry in the Anseba region. Having been tested on a several thousand acres of land, wheat, maze, Taffe and other cereals as well as vegetables for suitability of soil and climate, Kerkebet is expanding into large agro-industry. Drip, splash and other suitable water system are being used. The area is further powered by a power plant with the capacity of 16 megawatt, providing electricity to major agro-industrial areas such as Afhimbol, Gerset as well as Sawa.

Travels to Keren and Akordat, breakfast in Aderde and lunch in Kerkebet was all in a day’s travels for the Ministry’s members, all culminating in our arrival at the massive Kerkebet

dam and its agro-industry plantations at around 15:30. Having witnessed the developmental area, we set off to Sawa for the night. For me this was the first time I was returning to Sawa after I had completed my national service back in 2009. And what a change six years can make. Though it was eight in the evening when we arrived in Sawa, I couldn’t help but succumb to awe in all the positive changes Sawa had undergone in six short years. It was impressive.

After a long day in the road, we were treated graciously by our hosts to a delicious banquet. The next morning, we commenced travels, once again, at five in the morning, this time a visit to Alebu Innovation Centre, Gerset dam and a night at Fanko were on the itinerary.

After having breakfast in Haikota and visiting the Alebu Innovation Center as well as the canned Tomato processing company, we finally reached Gerset. Filled up to its borders, the Gerset Dam seems to be the venue of convention for the trees and animals in the area, while the vast land across it has gone beyond providing the fruits of its soil, we were told, the Gerset agro-industry had three different dams that supply the farm with a capacity of 65 million cubic meters of water. Gerset has been a functioning farm for several years with different kinds of cereal crops, vegetables, sugarcane, cotton and fruits. Gerset is cultivated with orange, lemon, mango, papaya and palm trees that have started to yield date and citrus fruits. It also has a cattle ranch where over ten thousand sheep and goats are nourished and housed in Gerset. This is a clear sign of Gerset’s critical contribution towards promoting rich biodiversity. Furthermore, Gerset agro-industries are reported to have opened employment opportunities for 4,000 local residents.

Afterwards, we held a luncheon consisting of spicy and aromatic herbs, a variety of vegetable dishes and capreto (goat meat) eaten communally in the gardens of the Gerset agricultural vista. We settled our famished stomachs and made our way to Fanko electric power plant, where a night dinner with some downtime to catch up on the last two days of our journey around the region dominated the discussion at the dinner table. The New Year was just two days away and this was the time to have fun and that we did. In the wilderness of Fanco, work suits were traded for shorts and shirts and the night was danced away.

Our last day on the road saw us drive to Teseney, one of the country’s commercial city’s where we witnessed firsthand the busy markets around the city and the four-star hotel

Costina. What a town Teseney is becoming, now with 24/7 electricity being provided for the city from the Fanco power plant, the town is in some ways becoming, dare I say it, “a city that never sleeps.”

By approximately noon, we were leaving Teseney in our rearview as we moved along long serene roads that led us to Barentu for a lunch hosted by the Commander of the Western Front, Brig. General Teckle Kiflai. Afterwards, just like in Teseney, we were parting with Barentu in our memories, making our journey back to our capital. A long trip awaited us.

By the end of it all, we became lowlanders, Keren, Hagaz, Aderde, Akordat, Kerkebet, Sawa, Haikota, Alebu, Gerset, Fanco, Barentu all in just three days. For the travelers it was a time to bond as colleagues, as members of one of the most important ministries in the country. It was a pleasure to witness the laudable development efforts being made by the government and citizens. As a citizen, it was comforting to see that the country was making strides in all the right directions and for me, personally as a writer, it was a dream come true to take this voyage across the biggest region in the country.

Land Grabbing- New Colonialism and How about Eritrea? Part II