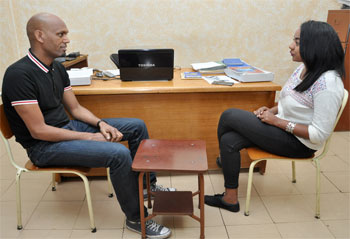 QUADSAW is now a company that I co-own. But it all started in the late 1990s, on an ordinary day of work in kitchen designing, I saw a colleague slashing out holes for some power outlets. I noticed how it took him tons of time to measure and cut a square hole. I asked him why wouldn’t he be using a square hole-cutter, he told me to get him one and he’d pay me double.

I really did not know that there was no such a thing—it never existed.

Thank God I shifted from designing to fitting. I should be grateful the office policy annoyed me when I had to stay closed in a room for hours of kitchen designing.
Afterwards I looked around to see if such a thing never existed, I went to the patent office and made sure there was none. And ever since then I could not stop thinking and rethinking about a square hole-cutter. It took me every day trials of many years to finally come up with this devise that would practically save builders tons of time; it cuts a square hole in 10 seconds.

Day in and out, I kept thinking of how to come up with a device that can actually cut a square hole. And then one day I was getting my coffee in a Costa Coffee shop on High Street Kensington, and a light bulb light in my head, “Aha!” I said, and sketched my idea on a napkin.

I thought of attaching a lateral motion drill, driving four blades set in a rectangle. Apparently, it worked.

Yes, you can say that. Engineering is something I have always wanted since I was a child. I was born in Adi Golgol, where my family runs a farm. I was impressed by all of the farming tools and machineries we used in our farm. What impressed me the most though was when mechanic workers would come to do maintenance services to the machineries. You know, how they’d spread their fabric on the ground and lay on the spare parts and all, which is something that I enjoyed watching as a kid. The sun rays would hit the metal to eventually make them dazzling. It was a vivid memory.

It’s since then that I wanted to seriously get to know mechanics.

I told my father I wanted to study. I told him I wanted to know how planes flew without moving their wings; I had so many curiosities. My father answered me saying, “Engineers would know”. Also, I was good at spotting problems and enthusiastic to at least try to look for solutions.

However, when I asked my father to send me to school, he was hesitant. To a farmer, losing a boy would mean a loss of profits, one less man to help. So he convinced me to stay for a year and eventually sent me to Asmara when I turned 11.

I started elementary school way too late for my age, but perhaps it was because I wanted to learn, I eventually always would make it to the top of my class and skipped one grade every semester. In about three years, I finally sat in class with student my own age.

My older brother ran a metal workshop in Addis Ababa so I went to work with him when I was in the 6th grade. I was working and taking vocational courses at the same time. However, I was not content since all I wanted to do was study engineering.

Nevertheless, I was good at comprehending how the machines in my brother’s workshop functioned since I spent a lot of time trying to figure out and understand how to handle them. In fact, almost in no time, from an errand boy, I ended up supervising several machines on my own.

The government of then issued a law whereby young Eritrean would be forcefully deployed in the Ethiopian army and fight against Eritrean freedom fighters. It came as a shock to many young Eritrean men who were studying or working in Ethiopia.

Of course, we had to leave. Many young men escaped from Ethiopia, joined our Eritrean freedom fighter brothers and sisters. As for myself, however, I escaped to Kenya in 1988 and stayed there for almost a year.

After a very long journey from Africa and around Europe, I made my way to England and decided to stay. I arrived on the 15th of September 1990 and started school on the 1st of October.

Not quite as fast but yes. I first had to go to college and then to university for mechanical engineering. I graduated in 1996. I went on to do my masters in product design at London South Bank University. Living away from home was not easy. I had to work to support myself. I had to do all sorts of jobs and even drove a minicab at the time, but then again, I never even once let loose of that original dream of studying engineering.

Ean Brown, my partner, started a company called Genius IP to commercialize new patents and QUADSAW became his first product. We are working on making the product more efficient and an easy gadget to handle. It is being manufactured in UK, although, the blades are being delivered to us from a renewed company in Germany.

Currently we are working to produce enough to satisfy demands which we’re getting from Australia, Asia, Europe and the USA. And then after, maybe in a year or so, we will advance to automated production.

I hope so! This is just the beginning. There, is in fact, one new thing that I have been working on lately.