Brains Behind the Tactics 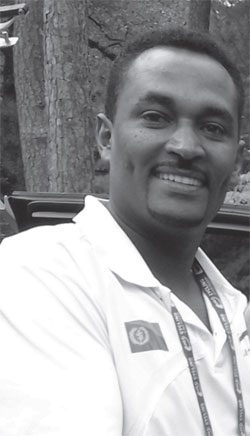 I was a passionate fan of cycling when I was young, probably the reason why I became an athlete for almost 16 years. I was fortunate enough to represent my country eight times at different tournaments. Those times are the highlights of my cycling history. During my cycling years, I was able to win numerous competitions and championships with different clubs. After retirement I went into coaching.

The truth is, it was difficult and challenging at first. To be responsible to shape a competitive team, create that wining spirit within these individuals who were different in all their ways, I would say, that, takes up a lot of energy and courage. I had the opportunity to take a few courses on cycling and coaching In Italy during my cycling years. So I guess that motivated me even more to be a coach besides my passion to be one. I had worked on being an assistant coach for the Red- Sea cycling team before coming to Asbeco, where I had coached the team for 15 years until I became the head coach for the National Team.

It is a team I had coached the longest. I brought on new young cyclists who I thought had a talent and capability to be great at cycling. Which was a great reward when the team was champion of the central region tournament after three years coming. We sure worked hard and managed to become not only a successful team but also a close family. I think that is why I stayed for quite a long time with them.

Well, thank you. It is not about who wins or who has a big name, what I try to look for most of the time is, the physical ability and talent. If I think the person has the skill and passion for cycling, I start to train them with the team. Providentially, almost 80% of my work with young cyclist has been a success. Six are now professional cyclists and over thirty are representing the country.

I believe that there are numerous young good cyclists that have bright futures a head of them. Bringing young cyclists and training them to be excellent and driven cyclists does reinforce the already formidable name Eritrea has in cycling, and it is a stepping stone on our efforts to dominate the cycling world. On top of that, it is very satisfying to train someone from the start and see them be great players.

I can say that I have taken almost all of the couching courses a coach can possible and should take. I had taken the First level, advanced level 2. Again I had the chance to take the refreshment course in South Africa, but the major one is the diploma I got on top level coaching course.

Massive difference between the two. Coaching a local cycling team is a busy task because the annual sport calendar is pact with numerous competitions. Coaching the national team is a less daunting task, in terms of the schedule, as the competitions are seasonal, but on the other hand the responsibility is much heavier when it comes to coaching the national team, as not only are you representing a club or a set of fans’, you are representing a whole nation. The responsibly is much bigger and inclusive. Again, to train athletes from different clubs and manage to bring them in a united spirit, is sure a hard work. At the end of the day, when clubs are successful and much more integrated the national team is successful as well.

I have been working with the team as a chief coach since 2008. It is a dream come true for me to represent my country as coach as I have done as a player before. I don’t exactly know how many times we have represented the country or how many awards we had won, but I can say that we had taken part at different games for over thirty times. Hard work pays off, during these times, we brought back numerous trophies back home. Our notable win was back in 2010 in Ruwanda, when we were crowned African Champions.

Naturally, the performances can fluctuate with time. But I genuinely think that we are doing well as a team. Most of the time we compete and manage to win without our top riders, whereas the other countries go in games with their best ones. But that doesn’t mean we should just relax and sit down, the good work need to be constant, there is no room for complacency in the world of sports.

Our target is to compete internationally not just regionally. We need to get the best results. We are going to compete at the African Championship tournaments this February, the decision hasn’t been made yet, but we want to analyze our potential without our professional players as well. How would Eritrea do without its top riders? But the decision would be made depending on the performances of the players.

Our main aim is to keep the wining mentality going and come back with more medals.

Thank you. I just want to remind the coaches, it is very important to know the ability and talent of their players. That is when you know the strengths and weakness that you can succeed to bring the best in a player. That will help you get your target without wasting time for each other. I would also like to remind athletes to relentlessly work hard in trainings and be disciplined at all times. As a country we have a good thing going on in cycling, lets us work together to keep the momentum going.